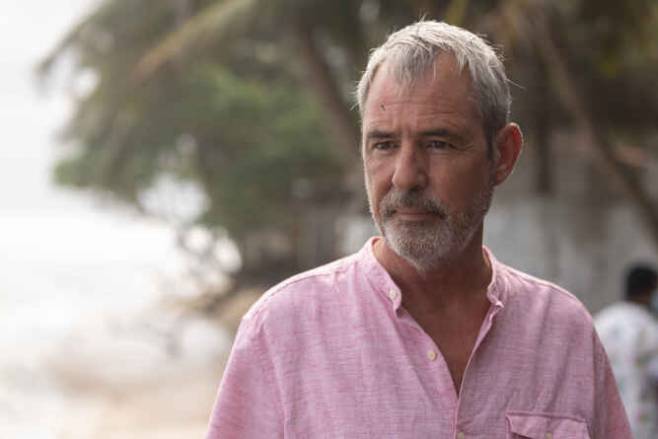 How has your character developed over the past few series, and what’s in store for them in this series?

Over the previous three series you’ve slowly gotten to know Greg a bit more and all aspects of this life. In the last series, we introduced his daughter and a grandson. We have seen aspects of what’s going on in Greg’s life beyond the bar. His relationship with Lydia has developed even more. In this series, there are a few little shocks along the way, where you get to see a different side of Greg again. Without giving much away the first episode shows Greg being arrested and investigated so we start to find out a little bit more about what makes Greg tick.

Where is Greg and Lydia’s relationship at the start of Series Three?

At the start of series three, they’re very much in love and things seem to be going absolutely beautifully. Then of course, at some point during the series, a spanner is thrown in the works to test our relationship. It is really up and down for them, they’re really tested both together and separately, which has been fun actually.

Greg finds himself in a pickle in this series, and quite a serious one, he always seems like the kind of guy who can get himself out of anything. Can you give us a hint of what might happen this time around?

In this series, Greg finds himself in a bit of a pickle. It is really difficult and he tries every which way to try and get out of the situation that he’s in. It really does seem like no one can help. One solution comes from the voice of Dr Nair, Darshan’s character. He is given a solution of sorts, whether or not he takes the advice, we have to see.

What is your favourite storyline from this series?

The storyline I enjoyed the most because there’s an awful lot of it in this series, is the storyline with Lydia and I and the various problems and solutions that come with the situation. Where character traits of both characters are revealed that we haven’t seen in the past. It was an awful lot of fun to play. I love working with Amanda, she’s absolutely brilliant. We’ve had a lot of screen time together, which is just fantastic.

What was it like being back in Sri Lanka filming with the cast and crew?

As a group, the cast are a joy to work with. We all love Sri Lanka so much. Having worked with many, many crews in my time, the Sri Lankan crews are warriors. They are just brilliant. Hardworking, diligent, fantastic. It’s a brilliant place to work and we are so lucky to get to come here year after year and experience this wonderful country.

What are your favourite memories while filming this series?

We have a new location for Lydia and Greg’s house, which has been lovely, but then again, every location is. You can just point a camera anywhere in Sri Lanka and it’s will look stunning. I had such a good time this series, it was a joy to come to work. Ingratiating myself, meeting new people, trying to have new adventures. It was difficult filming in lockdown, but even then, we really enjoyed it. It is a great cast with new people coming in, who are brilliant, young, budding talents. I can’t express enough how much we enjoy going out to Sri Lanka and working. It is always fantastic.

What are the benefits and challenges to filming in Sri Lanka?

The benefits of working here are the magnificent crew, the wonderful locations, the exotic nature of it all. Especially coming from a grey England, to be there every day for a few months is an absolute joy. There aren’t any downsides.

What can fans look forward to in Series Four?

Series four is a rollercoaster ride. There’s everything from the usual hospital and medical stuff with the usual bit of gore. A little bit of excitement, lots of new storylines coming in and out of the hospital. The excitement of the new characters and their interaction with the old characters. There are some twists in the plot, which I don’t think people are going to see coming, but I am sure that they’re going to really enjoy it.