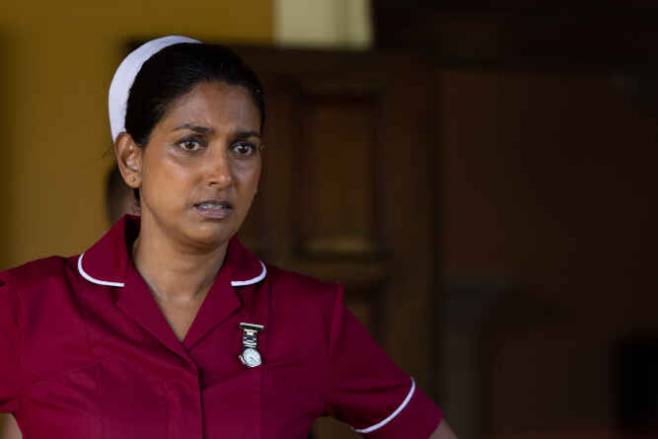 Can you briefly describe your role?

Sister Mari is the mainstay of the nursing staff. She’s in charge of organising a lot of the hospital administration to do with nursing and the maternity wards, but also works with the surgery teams too. I’d also say she is the one that a lot of people go to if they have problems. Although she’s quite bossy she has a big heart.

Where did we leave Nurse Mari in series three?

We left Mari in series three still single, very much committed to her work in the hospital. Nursing is her passion, and she takes it very, very seriously. You’ll see in series four she gives a lot of herself and puts herself at risk in certain situations.

How has your character developed over the past three series and what’s in store for them in this series?

In series one Mari had a very small part to play in the hospital, but thanks to Dan and the writing team her part has developed over the course of four series. We’ve gotten to see more of Mari, her personal life, her background and how she feels about things. We know at the beginning of series two her husband left her, she then wanted to adopt a baby, and that’s a huge commitment, however she was willing to do that. In series three we see her as a very strict upstanding citizen who follows protocol in the hospital. When she catches one of her nurses making out in the back of the hospital she is appalled, but after the acid incident we see another side of Mari. It really broke her to see that happen and the fact that this poor girl, as in many stories we hear in real life, has to deal with that for the rest of her life. Coming in to series four there are lighter moments for Mari, she’s also right in the thick of a lot of serious issues in Good Karma.

How do your two new doctors arrive at the hospital?

Doctor Samir appears out of the blue, he arrives at the hospital with a massive crisis, The other new character is Doctor Nicki, who is just charming, she arrives again out of the blue but obviously on Doctor Nair’s instruction. She’s a very young doctor, eager to learn and do the right thing, and be on top of the game. It has been really lovely to have new actors as well as fresh characters, it blasts a bit more energy into the show. We had a wonderful time working with them, then being in lockdown, in our bubble in a hotel like a dysfunctional family.

As always we see a number of different stories and issues occurred in this series. What’s your favourite storyline from the series?

There are two that really stand out for me. One of them is around the colour of your skin, and how the stigma around the world about being dark has caused so much pain to people of all age groups, ethnicities and genders. It is tackled head on and I’m very proud of everyone for taking up an issue like this. The other storyline is to do with childbirth. In developing countries we don’t always have the equipment to help how we want to be able to help. It’s very important to make people aware of the fact that equipment that’s so readily available in the West may not necessarily be around in developing countries. They are both pertinent issues that we’re tackling here. There are light moments too, which I think Good Karma’s always about. It’s a feel-good show that looks at gritty issues, but we also have the light moments because through adversity we always have humour, otherwise how do we survive?

What are your favourite memories from filming over this series?

The fact that we filmed during COVID during a lockdown that we had here, and being stuck with a bunch of people, some of which we didn’t really know. Surviving that and coming together as a family was wonderful.

What are the benefits and challenges of filming in Sri Lanka?

This is the fourth series so I think we’re doing pretty well here. The major benefit for me is that my mum lives here in Colombo so I get to bring my family with me. My son and my husband were with me this time throughout the whole period, which was really wonderful and grounding for me. The whole cast, Amanda, Neil, all of them, we’re such great mates now. There’s a wealth of talent here not just behind the scenes but in front of the camera as well. These things make me really happy and proud of this show.

What can fans look forward to in series four?