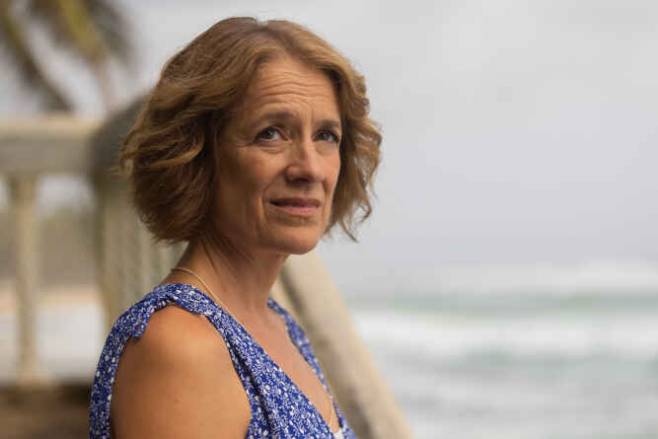 Can you please describe your role in this series?

Frankie Martin is the mother of Bobby who is neuro diverse and whose brilliance is taking photographs of birds. Frankie has been an incredibly protective single mum who has looked after him with very little help for his whole life. He’s getting older and is pulling away from his Mum, he is desperate for more freedom and to do more with his life. He was desperate to come to India to take photographs of the native birds of India. Through Bobby’s own hard work he gets them there, but the moment we meet her she just wants to go home, the whole experience is uncomfortable and stressful for her.

What was it about your character that made you want this role?

Frankie is a very complex character who has a lot going on, it’s a really meaty role. She’s not just Bobby’s mother she’s a woman in her own right and there are a number of aspects of her character that I can identify with. One being her struggle to let someone go that she loves. Secondly, part of her backstory is that she had breast cancer a few years ago, various people I know in my life have gone through that, on top of the fear of losing a child is something other people in my life have gone through. There were numerous reasons for wanting to do my best with it. The main reason being doing it for a friend who died not too long ago of secondary breast cancer, leaving her son and I just wanted to do it for her and to represent that role to the best of my ability.

Where do we first meet Frankie?

We first see her struggling to getting off the train with all of their luggage. Bobby isn’t particularly helpful as he’s always so focused on what he’s doing or being in the moment. She’s also the kind of mum who’s always done everything and therefore she’s taken away the fact that he is able to learn some responsibility and become an individual. She has completely wrapped her arms around him. They arrive via a Tuktuk to the place they’re staying and the person supposed to letting them not being there, so again dragging all the suitcases, they head to Greg’s bar. She just doesn’t want to be there, she’s in pain, she’s frightened, she doesn’t know if she can keep him safe there and she is convinced it is absolutely the wrong place to be. Greg is so welcoming and calming and kind. He is also so allowing of Bobby and his different way of being socially, she has a moment where she thinks it being in India might actually be ok.

She feels like someone who is carrying an overwhelming burden, is that an accurate description?

Frankie feels like she has to hold Bobby in every moment of his life. I can understand why she wants to look after him but equally I can understand his frustration. When we first see her she is physically dragging this burden and as the story goes on we realise there is such an emotional burden too but it is a burden of her own making. She is someone who cannot and will not ask for help. Even though she takes Bobby to hospital twice during the first two episodes it’s not until the third episode that she breaks down and tells the young doctor that’s been helping them that she’s frightened for her own health. This is just an embodiment of who Frankie is.

Frankie adores him, Bobby is her world. Frankie has been both mother and father to Bobby, she’s subsumed her life in place of his. Her world has had to revolve around him to the extent that she’s suffocating him and she doesn’t realise. He’s a young man who needs to move out, who needs his freedom. The most important part of the story is really, will she let him go.

What kind of man is Bobby?

Bobby is young, quite innocent and incredibly sweet. It is a study on one mans struggle to be an independent human being. The scariest thing for Frankie is that Bobby doesn’t see risks. He is easily manipulated but he has a right to be a young independent man and that’s something Frankie is struggling to see and really struggling to let him go.

What was it like filming in Sri Lanka? It was absolute treat coming to Sri Lanka.

How often do you have the chance to be flown over to Sri Lanka and work with people from a completely different country. I absolutely loved working with the people of Sri Lanka both in front of and behind the camera. All of the locations are breath-taking. It’s interesting as we shoot on the south of the island and the time of year we filmed meant the sea was incredibly angry. The sea is like a character in the show almost, it’s a force. I love it because it’s so tropical, there’s nothing I didn’t love. I feel very blessed.

What was it like joining this cast and such a popular show?

When I was offered the part, I was actually working on another show and one of the actors on that show, Phyllis Logan, was in the first two series and spoke about how much she loved it and would give anything to come back. I also know the director, Philip John. Literally everyone was saying you have to do this, you will love it. They were absolutely right, it was fantastic and I had a great time. The fact it’s a popular show is brilliant too, an added bonus!

What do you feel the international appeal is for The Good Karma Hospital?

I look at stories for their humanity and when I read the scripts I thought this series has such a good heart. Over Zoom as you do in covid times, as a cast we were all over the world, but we had an hour where we did a ‘zoomthrough’ of episode one and I came out of it going not only does it have a beautiful heart but every character is a character I’d like to spend time getting to know better. I was so thrilled after that. I loved the team and you could tell that everyone loved their characters. It’s a truly international show with actors from Sri Lanka, actors from India, Canada, the UK and elsewhere. The locations, the storylines which don’t pull their punches, the comedic aspect to the show. It is also warm with a good heart and isn’t afraid of tackling some very difficult issues. I thoroughly believe it deserves the following it has and I’m so pleased to be part of it.