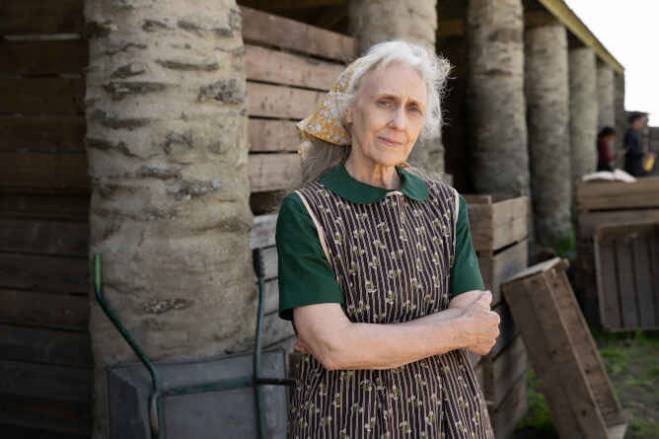 “My agent let me know that there was a project coming up that might work out for me. I got the script and started reading it and thought that if I was offered the role of Grace it would be quite unusual casting. Then, as I read on, I came to see the logic more and more and by the end of that script, I was like, ‘sign me up, immediately!’. It felt like a long time before the role was officially offered to me, although, funnily enough, when I turned up for my costume fitting, the designer, who I’d worked with before, pointed to the rail and said, ‘There’s all your costumes’. She knew my size already and she’d known all along that I’d be playing Grace.”

Who is Grace and in what way would it have been unusual casting?

“Well, I’ve played some very feisty characters in my time, whereas Grace is a sad, wretched woman whose life has dribbled away from her. She is so beaten down and repressed and, possibly, chronically abused – not physically, but mentally – by her husband, Dennis, that she doesn’t really know how she even feels about anything and she doesn’t know how to form proper relationships because she’s never had the opportunity to do so.

“It was fascinating to me because, if I hadn’t been an actress, I’d have wanted to be a therapist and I love getting inside people’s heads. With Grace, all those endless years of being without a proper voice, without being able to express yourself either verbally or physically – I mean, those clothes, for a start! – it does something to a person.

“Grace and I are very different kinds of women, with very different lives and yet I felt a deep empathy for her, in fact, I fell completely and utterly in love with her and I found I could access her very quickly. I think there are a lot of women out there who will identify with her too. After all, as a woman, you don’t have to be part of a repressive, evangelical community to feel trapped, unhappy, stuck in limbo and unable to express yourself. I found myself protecting Grace very strongly and, if I could, I’d have grabbed hold of her and said, ‘It’s alright. We’ll find a way through it.’”

How much did the costumes help you to find Grace?

“A lot. And I have to be honest and say that I actually relished those costumes, even the socks and sandals! And I LOVED my long grey wig. Together they gave me the ability to immerse myself completely in the character. It was joyful, but also quite scary to look so different and I even sent my husband, Brian (May) a picture on the first day, telling him to delete it immediately! He said, ‘Oh, no, I quite like it. She’s sweet.’ And I said, ‘Yes, but it’s definitely not how you’re used to seeing me’.”

How easy was it to leave Grace behind at the end of filming?

“In some ways, it was very easy and very necessary because if you carried her around with you and remained in her head after filming a scene it would be quite depressing. So, I felt duty bound, not just personally, but for everyone around me to find the bright side of myself the moment Lee, our director, said ‘cut’. When you do that, it makes it easier to come back and dive into the gloomy morass of feelings necessary for playing Grace. There are a lot of sad and tragic elements to the story but, off screen, we honestly had a lot of fun.

“In other ways, though, Grace did stay with me and she taught me a lot: most important, never judge someone purely on what you see. Sometimes you have to look beyond the façade and the barriers that they’ve put up to protect themselves. You have to say to yourself, ‘wait a minute and don’t jump to conclusions about someone.’

“She also rubbed off on me in unconscious ways. Shortly after filming, Brian and I were having Sunday lunch with a close friend and I had adopted Grace so wholly that I was kind of enjoying the no make up look. So, I just pulled my hair back, didn’t bother with the jewellery or the lipstick and mascara. And Brian was like, “What’s all that about?” I suppose I just felt I didn’t have to bother or make any big effort. And that was really Grace talking.”

How was it working with Martin Shaw?

“Ah Martin, I told him he wasn’t the first Dennis I’d encountered! (remember Dirty Den on EastEnders). But, seriously, he was lovely and extremely easy to get on with and most important, of all, as an actor I felt extremely safe with him. Martin is playing someone who believes that he is being loving in his own way, but Grace can’t even look him in the eye. She is completely controlled by him. The scenes between us were tough but, because we tended to think alike, and we trusted each other we were able and willing to just run with it and to find the truth in those scenes. It was actually rather wonderful.”

Did you do much research into the Brethren?

“Well, the Barum Brethren, is a fictious cult, made up by Ann Cleeves for the novel, but it amazed me to learn that there are, in fact, lots of real-life similar Brethren communities existing all over the place. I hadn’t known anything about them, but I started to dig around a bit and to talk to various people about the Brethren. Strangely, I discovered people who I thought I knew really well had connections to it – either they had personal experience or their parents or grandparents or aunts or uncles had been in the Brethren. It was almost like lifting the corner of a carpet and peaking underneath. Then giving a little shriek and dropping it again.

“It was enlightening, fascinating and a real privilege to be able to disappear into a world that was so alien to my own existence. Honestly, you can’t imagine that people – and especially the women – are living these kind of lives that are so disconnected from the modern world. I resisted the temptation, though, of doing too much research because I wanted to come to The Long Call as fresh as possible and to find my own Grace.”

How was it filming in North Devon?

“We filmed all the interior scenes in Bristol and moved to North Devon for the last three weeks for the exterior scenes and it was quite an eye-opener because I’d never been there before. The landscapes are just stunning – and quite different, according to the weather. On my first day of filming in Devon I was doing a scene with lovely Iona Anderson who plays Rosa, and we were sitting on a little outcrop of rocks looking out to sea. It was a rainy day and the landscape was so dark and rugged with the sea rolling in and pounding against the rocks. So dramatic. Other times the sun shone, and the landscape was transformed. I thanked my lucky stars every day that I was not only in such a beautiful place but filming in it and still doing the job I love. What an absolute privilege.”

And what was the biggest challenge of the role?

“Making sure my wig stayed on, which was more difficult than it sounds! But, seriously, it’s the same challenge I have, whatever the role, which is to be as good as I can be, to deliver exactly what the director, the writers and the producers want and to do it as quickly as possible. It helped so much that we had such amazing people in charge, from the producers to Lee our incredible director who knew exactly how to get the very best performance out of everybody and to make it such a happy occasion at the same time. I’ve had a lot of lovely jobs and worked with some wonderful people, but this one is right up there. There are a few that will be forever embedded in the memory and this is definitely one of them and to get it now at this stage in my career was a double whammy.”