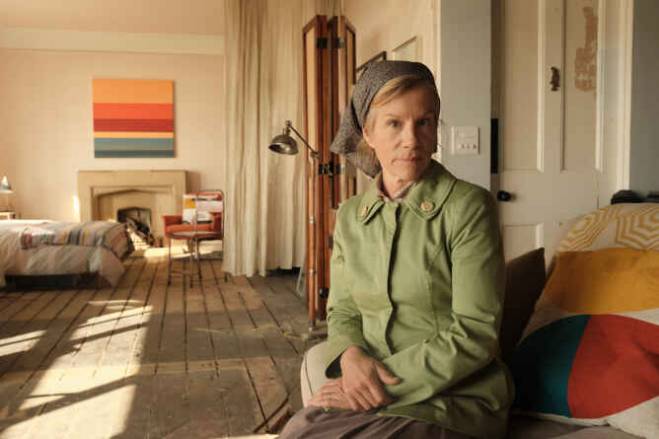 “My agent asked me to read the script with a view to playing Dorothy and, at first, I thought, “Oh, another murder mystery” but then, I immediately found myself getting pulled into the material, which is such a clever mix of thriller and psychological study. There were so many interesting, unconventional, unpredictable characters and they all have such complex relationships with one another. Also, I’m always drawn to playing quite extreme characters – and Dorothy is certainly one of those. She offered the chance to investigate a completely different way of living, being and thinking, which is often what I look for in a role. I put the script down after the last page and picked the phone up….I couldn’t wait to plunge in.”

“Dorothy is a woman who has given herself over entirely to the Barum Brethren. Perhaps, like many others who live a life of religious devotion, she needed structure in her life and the security of belonging to a small community who all share the same unquestioned, unnegotiated, unmediated values. She doesn’t doubt and she doesn’t challenge – and because the Barum Brethren is very isolated from the rest of the world she doesn’t need to.

“She accepts without question a life in which women are desexualised and subordinate to men, and believes entirely that come judgement day – or as they call it in the Brethren, ‘The Great Sweep’ – she and all members of the Brethren will be swept up to be at God’s right hand, while the rest of the world will burn in hell. The Brethren believe that high on the list of those who will be judged and punished are gay men – of which her son Matthew is one. Which is why 20 years before, when he came out to the community as a young gay man, he was forced to leave the Brethren and his own parents behind. Dorothy, then, has chosen her religion above her own child, which is about as remote from my understanding of motherhood as I could get. I could understand someone believing in a higher power, but I struggled with the idea of putting religion before your children.”

What were the biggest challenges of playing Dorothy?

“The scenes between her and Matthew – when he is expressing so much upset, pain and anger with Dorothy – were challenging for me. I guess I am a pretty tactile person and a demonstrative mother, but Dorothy has been cut off from her feelings, and the laws and restraints of her church have long messed with her instincts and her maternal impulses, so she can express very little openly.

“When shooting these scenes it was sometimes hard not to cry, and I had to say, “Oh, sorry! Stop! Cut!” because I knew that tears would never be Dorothy’s way. I would have to take a quick break to realign myself inside her emotional and psychological framework, get back into her cage… Luckily, Lee is a wonderful director who started out as an actor, so he understood all this!

“Often in the script, she’s described as “being stuck” or “unable to speak”. My constant question was, “Does she understand her feelings but lack the vocabulary, or is she actually so cauterised emotionally that she doesn’t even know how she feels?”’

How difficult was it to have to carry off Dorothy’s look on a daily basis during filming?

“I’m absolutely on board with the idea that there is no place for vanity in roles and, as a rule, I’d rather look right than look good. But I’ve got to say – playing Dorothy stretched those principles to the limit! I’d be staring at my tired face in the mirror in the make-up truck at 6am before filming and thinking, “Oh, surely, a bit of subtle mascara ?!” But it was, “Nope. Absolutely not!” And I’d have been cross with myself if I had been allowed to go down that road, because it would have looked wrong.

“The clothes, too, were pretty challenging – because, while the men in the Brethren are allowed to go around in jeans and Tshirts and perfectly ordinary clothes, the women are wearing a sort of medieval garb: long, bunchy skirts, sandals and socks, little headscarves and long hair right down their backs. It’s as if these grown women have been infantilised, they look outgrown little girls. They are also completely desexualised in ways that, of course, the men are not.

“It seemed very contradictory to me that the Brethren call themselves a community without hierarchy because they don’t have priests, for example. And yet the men make all the decisions. They have all the power and all the resources, while the women clean, cook and raise the children in a completely gender-conventional way. The men also insist on and expect complete obedience from their women, which is the opposite of equality isn’t it?”

You seem very well informed on the Brethren. Did you do a lot of research?

“I did as much research as I could in Covid conditions – i.e. without being able to actually visit living Brethren communities, which would have been the most illuminating thing. So I read everything and watched everything that I could.

“I saw copious YouTube videos, many featuring people who’d left similar sects or religious communities, and who needed to talk about their lives there and how they coped with the modern world afterwards, never having been on a tube or a bus, or ordered a cup of coffee in a café, or watched a television programme. I also talked with people who had personal experience of living inside a community like that, and how they felt from the outside about their lives within, the pressure on them to conform, and also about the positive aspects of it – the lack of materialism, the disregard for wealth, the aspiration to equality, the pleasures of communal living, etc. It is not hard to see how attractive these qualities might appear to people in need of belonging, and of surrendering choice to rules, and escaping the personal by living collectively. It wasn’t my job as an actor to judge any of this, but simply to use the knowledge to discover who Dorothy was, and what was happening within her when her silences held her speechless in their grip.”

How was it coming back to work after lockdown?

“The Long Call was pretty much the first job for all of us after over a year in lockdown, and I had got to the point where I was very worried my industry would never recover.

“So, there was a real sense of excitement to be back on set, working on this terrific drama, in the company of such a lovely group of actors, with Ben Aldridge at the centre of it and the rest of us, unbelievably happy to be on the journey with him. There was a real atmosphere of low-key celebration to be back at work, and a sense that we were lucky to be there. There was gratitude for the return of so many things that we had previously taken for granted and then lost during lockdown. I know that working on The Long Call gave those things back to me in spades, and I hope I can hang on to that gratitude indefinitely.”

What do you have coming up next?

“I’ve been working on a new ten-part Netflix drama series – with a working title of Tinkertown. It’s based on the movie, The Man Who Fell to Earth, which was directed by Nicholas Roeg and starred David Bowie as an alien man on earth to save his own planet from drought and dehydration. I play Mary Lou, the woman that Bowie’s character fell in love with in the original movie, but 40 years on. It’s a fantastic script and a thrilling project to be part of…very exciting indeed.”