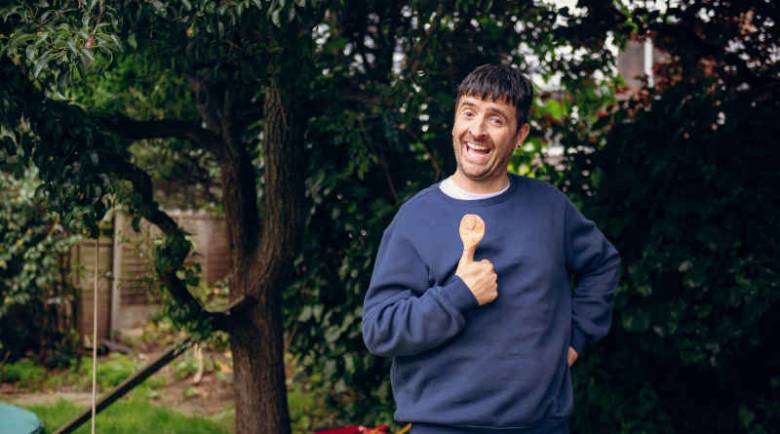 Can you give a bit of an overview of the series and Herbert Clunkerdunk for those not familiar with him?

I wrote The Mind of Herbert Clunkerdunk because I needed a way to take my onstage character The Herbert into a television narrative. People wanted to see weird stuff from me, odd visuals, DIY music, strange characters. So, I created a sitcom with elements of sketch in, where the audience can sometimes see what Herbert Clunkerdunk is imagining. Be it a music video about vacuuming, a saucy window that’s a puppet, or a western movie about a dodgy mechanic.

How does it feel to be back for a second series?

Very pleased to do the second series, but when I first got the call from David Simpson, I wasn’t sure I had enough new gags in my locker. I started from scratch again, coming up with gags and songs and characters.

But then lockdown happened and suddenly everyone is stuck indoors, trying to keep themselves amused by making stuff, doing art, writing songs, making weird things, and experimenting. And let’s be honest, people came up with some brilliant stuff. I started to worry a bit, suddenly everyone is doing what I do to come up with new material. It was a kick up the arse for me, I would need to up my game just to compete with what the general public were coming up with.

What have you done differently?

I took all the stuff I learned from the first series and added to it. The two big changes were that I wanted Lucy Pearman’s character Bobby Kindle, who plays my wife, to have more to do. She was criminally underused in the first series. Lucy is very good at comedy but can handle anything else you throw at her. The other thing is we’ve put a load more music in. And I’ve got better at it.

Also, Jonny Wallop is back, but we get to see a slightly softer side to him. There are lots of excellent guest appearances in this series. The quality we got was so good I really had to up my acting game. They all made me act better.

What are the main themes of this series?

Main themes are family, work and being an idiot, three things I am most knowledgeable about. There’s other stuff but it’s a bit more hidden. Herbert is not in control of his mind, and neither am I, so there’s a lot of themes in there: money, fame, love, mental health, the environment, children, friendship, window cleaners, denim, sexism, and stationary that makes love to itself.

How was working with Lucy and the rest of the cast including all the cameos?

A brilliant cast who I have become great friends with. To have those people around me, in that very high-pressure situation of filming where my brain is jumping from one thing to another was vital to me being able to pull this off. Like everyone I was a mess after the lockdowns, confidence low! That’s when you want good people around you, and I am very lucky to have that.

In addition to a great returning cast we were blessed with a whole new load of people I had never worked with before. I wanted brilliant people to push me and the script as much as possible, and we got that and then some.

Shiloh Coke did serious, menacing, and suspicious one minute and the most glorious, grinning, lovable mechanic the next. Solid actor, but we did have to do quite a few takes when it came to throwing things. Felicity Ward gave us a treat on set, she might be my favourite dancer on the planet. She was too funny, and people were ruining takes from laughing. Sarah Twomey was a revelation. Originally cast as Lipstick Linda, she also became a huge hairy monster from Jonny Wallop’s imagination. And her work rate saved the shoot on the very last take we did. Will Seaward is an actual lovable force of nature, who we managed to harness. He is the best Goth Rocker in southeast London. Marlon Davis silent comedy bones get a chance to shine. We know how good he is at stand up but, he is also a very decent physical performer. And of course, Jim Moir agreeing to do a cameo blew my mind and it still does when I think about it. Vic and Bob were the biggest influence on me as a teenage kid. I get very nervous around them, and I think I always will. Finally, I should mention Kit Sullivan who turned up on time and had learned his words to be fair.

Can you talk through the puppets, props and VFX used?

As always, I have Jonny Sabbagh and Will Harper in my corner on everything that could be a puppet. From the talking front door and sexy windowsill, to an entire row of shoes, a Jagger-esque rubber mask, and the beautiful underwater fish they created for an environmentally friendly music video.

How was working with your children this time around?

My children were way more professional than me. They put me to shame. They drank a lot of tea, and they knew all the words. I was really proud of them. I’m not sure if they want to do any acting again, up to them, but they were the best choice for the weird stuff I needed them to do – we taped my daughter to a wall.

What do you want / hope viewers will take from the series?

I hope if they shout at me on the street its nice stuff. But I know better than anyone that Clunkerdunk is a strange show and won’t be for everyone.

I also hope they take the title and tell other people about it. It hardly trips off the tongue, so we have a theme tune now – literally says the name of the show 10 times. Perfect.

If you do watch the show, please turn up your headphones. And take breaks in-between episodes. Do not binge this show. It will do your head in.