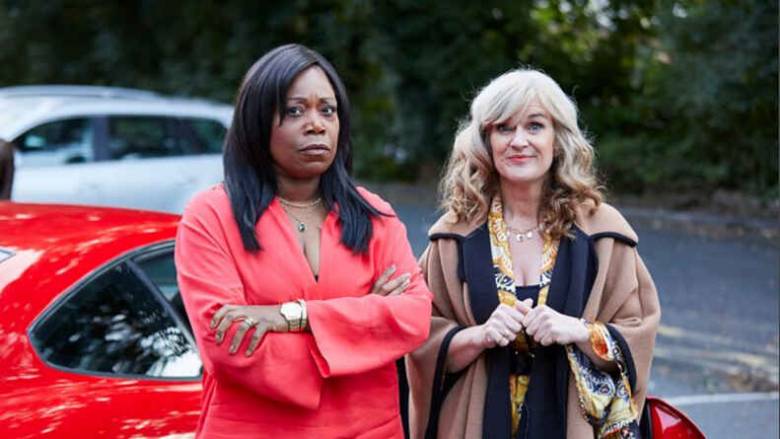 So, tell us a bit about Angela and where we find her.

When we find Angela, she is at the top. A self-made millionaire businesswoman who’s incredibly confident, but also a bit of a mess too. She’s not as slick as she could be! I talk to Holly a lot about that thing where you project that you’re really in control, but just out of sight you’re a mess or it’s not quite as it seems. She’s a confident, middle aged woman in love with her husband and thinks she’s got it all, then it all quickly comes tumbling down around her.

What sort of person is she?

She’s the kind of person that I imagine would aspire to be on Dragon’s Den as a dragon! She’s a wannabe dragon, that’s the best way to describe her. Obviously, it’s a comedy and it’s a lot of fun, but we definitely want to think about her being a successful black woman in what must be quite a white male dominated business. So, she’s got to have a level of confidence and hutzpah, which she has in spades. I mean, she might not be the classiest with how she spends her money, you know she’s got quite the house there! But she does have a very bougie lifestyle put it that way, there’s a lot of gold and crystal.

The shocking news is completely out of the blue for Angela, how does she react to it?

Not very well. She doesn’t react very well, because she’s not used to being out of control in a situation. Also, she’s having to deal with the shame of it all because it is completely unexpected for her. She is really determined to get her life back at any cost really.

What does she think of Tess and Marilyn initially?

She doesn’t think much of Tess and Marilyn at all. She’s quite the snob. She does warm to both of them, and probably because she doesn’t have an awful lot of friends. She’s working all the time and I think those kinds of businesspeople probably don’t have as big a social life as they would like. She absolutely adores her husband, and he keeps the house and home together. It’s appalling the idea of not being with him, but also, she’s dealing with the shame of the situation. She’s deeply ashamed and she’s deeply embarrassed by the whole thing. I mean, what would the Cheshire set think?

Do you think we will see friendships develop?

Yes, we do see friendships develop and I think it’s opposites attract. I think she really loves the fact that she’s probably inspiring Tess to be more confident. I think that she thinks she’s really an inspiration to Tess. And she thinks that Marilyn is fun really. She has fun with Marilyn, and they have common ground in music, cigarettes and wine.

The characters you played previously are very different to Angela. Did you like playing her?

Oh gosh I loved it! Because (and I thank all the relevant parties for giving me the jobs in the past) I’ve spent an awful lot of my career in nursing scrubs and uniforms and in sensible suits. I’ve played quite a lot of caring professionals. So, it’s been utterly joyous to be able to put on slightly naff, gaudy clothes and wear lots of really amazing wigs!

I made a decision quite early on that she has a selection of wigs that she wears because she probably doesn’t have the time to be in hairdressers all the time, so I wear some really fabulous wigs. Danielle was amazing at finding really great costumes for me. She also did the costumes for Alma’s Not Normal, she’s brilliant. I loved playing Angela because she was goofy, and I got to do a lot of tripping up and spilling things on myself and choking and the kind of goofy stuff that I do at home. It was a lot of fun.

How does it feel to be joining the cast?

It’s always a strange one isn’t it, because it can be a little bit like going to a new school, you do have that feeling! On the one hand you want to be confident and on the other hand you don’t want to go in all guns blazing with your best jokes and sort of bamboozle them. You’ve got to get to know people. But I was really lucky that we got to do some rehearsals before, so I got to meet everyone then. I have a few friends in common with Siobhan so I knew her. I was incredibly nervous because I think they’re brilliant. But they were very welcoming and sweet to me. I had a laugh and a lot of fun with them. I hit them with some of my best jokes and stories and it was okay in the end, you know?

Do you have any anecdotes from filming?

We were filming in summer and by the end of the day the dog was quite pungent. Possibly one of the worst days of my career was that the day because we had to film the dog licking my feet. They had to spread Dairylea on my feet because the dog liked it. The next day, when I got back to my hotel room, there was a beautiful package of foot soak and chocolates and lovely, nice things from Holly just to say ‘thank you very much’.

I have to be honest, lots of my things involve the dog. The first day of filming, when unfortunately, Holly tested positive for Covid, she was directing us via Zoom, the dog was pretty lively and was supposed to be sitting still but didn’t want to. That’s also the day I discovered (because I’m not a dog owner as you can tell) that dogs have periods. So, I’ll just leave that one there, it was quite an interesting filming day.