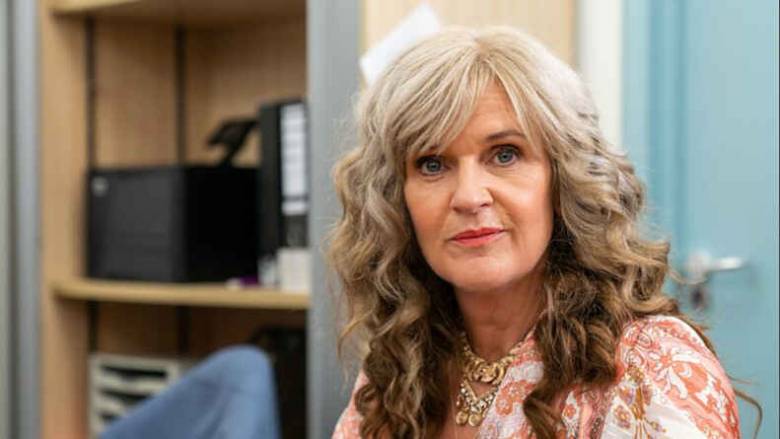 Tell us a bit about where we find Marilyn this series.

It’s a year since Colin has died. She has grown quite a bit and is a lot freer than she was in series one. The phrase ‘the truth will set you free’ is probably very relevant to where Marilyn’s at when we find her in series two.

And how does Marilyn feel about Tess at this point?

From Marilyn’s point of view, Marilyn has always known about Tess, so she’s never had to suffer the horrific shock that Tess did – finding out that there’s this other woman that had been in his life for 30 years. She’s never had to deal with that. Marilyn has always known that Tess was there and never thought that Colin would leave Tess for Marilyn. They only had Colin one evening a week so the grief of losing Colin is there, but the rest of the stuff has not impacted on Marilyn the way it has done with Tess.

I think because Marilyn has always known Tess was there and probably has an understanding of how terrible that will have been for somebody. And because she embraces Cathy so easily and Cat is so welcoming to Cathy. I think if Cat was struggling, Marilyn would maybe be struggling but Cat doesn’t seem to be struggling with that new relationship. She’s thrilled with it. I suppose it’s just a connection still with Colin. They’re not at loggerheads as they were in series one, but that’s down to the fact that Tess has sort of accepted that that happened and is coming round to the realisation that Marilyn and Cat are not the devil incarnate.

It’s safe to say she does not take news of the ‘other’ other woman well. What can you tell us about that?

Not at all. She is then experiencing something that Tess had experienced 12 months before. It’s that revealing of another huge secret. I think Marilyn had settled herself with the fact that there was a wife and lived in that world of the – and forgive me now – ‘other woman’ headspace of going, well, I get my lovely time with him, I know he loves me. But to then find out that she wasn’t just the only other one, to try and get her head around that is really difficult.

She needs as much information as she can and the one person that could answer all these questions is no longer there, so they’ve got to set about their own detective work. He’s not there to answer the questions that I imagine any human being would want to ask. He’s just left them all in this incredible mess that they’ve now got to come together and work out themselves. To work out what the hell has been going on. And if there’s another one, there could be another 10!

Marilyn is certainly a character different to any other you’ve acted. Do you enjoy playing her? Do you like her?

I absolutely love her! For me, she is the most uninhibited woman I’ve probably ever played. Even though she’s so flawed. In series one you saw that she’s permanently medicated and can’t go out of the house. All of those things are absolutely horrific for somebody to be dealing with. I try and root it somewhere. All of that mess is now behind her as we start series two. Like I said before, it’s that thing where the truth will set you free. She can breathe again and all of those restrictions, whether they were medical or psychological problems she was having in series one, they’re slowly but surely ebbing away in this series. The doors have opened and as they’ve opened, she’s been confronted with Angela and the fact that he was lying to her as well. I think with Marilyn, the balance she had was that he was never lying to her. She knew what the situation was, and she was happy to go along with that.

What do you think about Holly’s and Pippa’s writing and the direction they’ve taken this series?

I love the scripts. I think the scripts are really, really funny. But also there’s a whole lot of heart in there, which is a treat to get to play. It would be completely and utterly depressing if we were making some kind of documentary because we wouldn’t get to see the funny side of it at all. Whereas the fact that these people are thrown together and are completely opposing families, that’s where the fun is. If we were making a drama, there would be no fun there because it’s actually a completely and utterly horrific situation for anyone to find themselves in.

You have a fantastic cast ensemble. What are the days like on set?

We have a really lovely time, actually. I was thrilled this time round to get to do more stuff with Rebecca because in series one the characters were at loggerheads. So, this series they’ve come together a bit. And the girls are great, Lauren and Ellie are just great fun to work with. It’s a lovely job. And the sun was shining, which always helps!