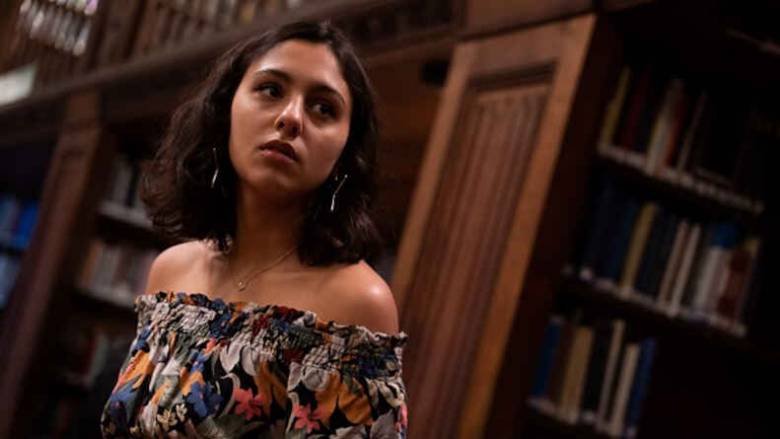 Introduce us to your character in The Outlaws.

I play Rani Rakowski, a teenager who’s just been accepted into Oxford University and is looking forward, maybe, to going there. And you discover in the first couple of minutes that she actually loves to steal things. It’s just her prerogative, really. I don’t think there’s any kind of side hustle going on. I think it’s purely the release and the adrenaline rush of misbehaving. That’s the catalyst for her doing community service.

Her mum’s from Sri Lanka and her dad’s from Poland. They’re both immigrants and very strict. They want her to succeed, which is the feeling for a lot of immigrant families in this country. As an only child she feels that pressure. When you grow up in a family like that you don’t know that there’s another option; you don’t know that you can misbehave. I think that’s such a shock to her when she starts the community service, where she sees all these people that have not only done something naughty, but are continuing to be naughty and just not obeying. And I think it would be shocking to me – I grew up in a very similar household to her and so she wasn’t that hard to access.

When she witnesses all this transgression, what does it do to her?

I think it’s the same feeling of like when I went to the West End and watched musicals: I didn’t even know that that was a choice, I didn’t know you could get paid, and I think for Rani it’s a similar thing of like, wow! You can do that? And survive on that and live on that and not have a normal life?! It’s so exciting to her that her life isn’t limited to what her parents have created for her.

It sounds as if there are there are some parallels between Rani’s experience and your own. Is that why the character appealed to you?

I was on another job and it was a really sad, true story about honour killing. I was in the props trailer when I found out I’d got it and it was like, Stephen Merchant, drama comedy series… I thought that’s great, he’s great, and I don’t want to cry anymore. Knowing that it was going to be helmed by such an icon of comedy meant a lot and I think I just knew that character straightaway. I understood that experience really quickly.

Who in the group does Rani get on with? Who does she have most interactions with?

Mainly Christian, Gamba’s character. Which is great because me and him were friends before this show. He’s a young, cool, and attractive boy. It’s interesting because I think it’s a coming-of-age story for everyone’s character. Even though there are 50 year-olds in it. Even Christopher Walker’s character ‘comes of age,’ because we all have to grow so much and learn from each other so much.

Does Rani have a particular antagonist? Someone who rubs her up the wrong way?

Yeah, John [Darren Boyd] does. I think what’s really interesting about now is young people are much more – I hate the word but ‘woke’ – and aware of politics and the experiences of minorities. The way that John thinks, and the way that John speaks… as an intelligent girl, I think it would be very hard not to find him irritating. He’s a great character, but my God, would he annoy me! Rani’s too shy to say it but in little moments, I’m allowed to play it.

What’s the tone of The Outlaws?

Stephen’s tackled the balance of drama and comedy so deftly. Working in percentages my character is like, 90 percent drama, 10 percent comedy. But other characters like Diane [Jess Gunning] are completely the opposite. You can be reading the scripts and be laughing but then I’ll be acting in a scene and not expecting it to be upsetting or emotional – and then I’ll just be struggling not to cry. It’s because Stephen’s interrogating a lot of really tough topics, but then also throwing in some really funny British witticisms. When you’re in the scenes you have to block out the funny otherwise you will laugh. And it’s not for me to laugh, it’s for the audience.

What were your preconceptions about community service and how have they been changed by what you’ve learned playing this role?

I thought it was actually really serious. In some ways I was right, but then when I was doing my auditions and in my first meeting with Stephen we talked about how his parents were community service officers, and how that experience was for them. Also, a lot of celebrities have done it. I think more people do it than you think. I think Naomi Campbell did it, didn’t she? It’s interesting, when you realise that no one is above the law.

Amazing. Firstly I’m so lucky that I worked in this terrible year. And it’s so weird that Christopher Walken is in it. So weird that he is in Bristol, just chilling in a tent with like heaters. On this show I’m the youngest person on the set. I’ve learned so much. And Bristol’s so colourful. The director of photography, Nick, has done such a gorgeous job of capturing the colour and vibrancy.

Working with Stephen [Merchant] has also been amazing. He’s one of the hardest-working people I’ve ever met. And he’s so smart. He’ll go from being the Stephen that I know – very intelligent and takes everything seriously because it’s his baby – and then he’ll play his character, and you’ll be like, this man’s an idiot! But he’s the mastermind.