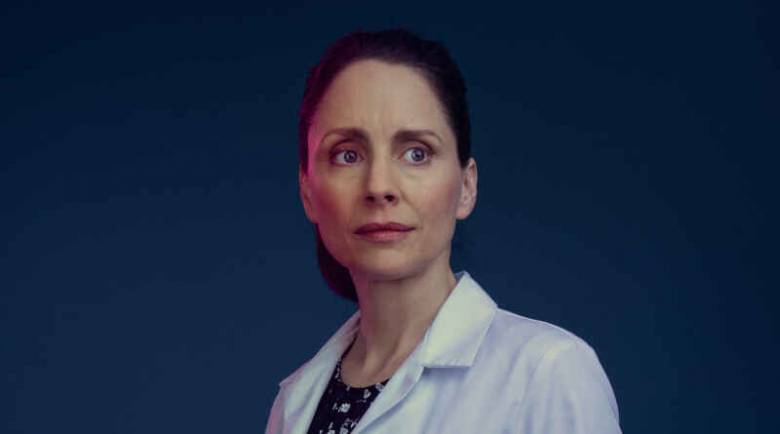 What was it like coming back again for a second series: was it easy to slip back into character?

It was so much easier to come back to a second series. Knowing some of the cast and crew as well, and knowing people are nice, is such a relief. There’s a slightly different storyline this time, with less of a focus on fire and more on bombs.

You’re an expert in bombs now, I’m sure.

It’s so funny, because I forget what I’ve learned. The next day, I couldn’t even tell you one line. It gets discarded. It’s so weird what the brain does.

Where do we begin with series two?

It starts with a court case surrounding the murder of Marie Monroe from the first series. Meanwhile, Sarah is examining evidence as it comes in relating to a series of bombings in Dundee, so she gets into the physical remnants, electrics, and materials of the bombs. It really gets into the nitty-gritty

Do you enjoy how much detail it goes into?

That meticulous attention to detail, although it’s hard to focus and learn it, is interesting because it’s a relief from thinking about your normal stuff. It’s really ordered. Sarah is looking for truth without her own bias, prejudice and conditioning, and she can forget about her own life while she focuses on that. I enjoyed the relief of that myself.

And what’s happening for Sarah in her personal life?

She’s ambling along okay. She has these feelings for Neil McKinven, but she’s really trying not to have them. Her emotional life is a mystery to her. She can look so meticulously at evidence in front of her, but she’s unable to do that for herself in her own emotional landscape. She’s repressing her feelings, and even withdraws when Kathy asks her about it, and gets very defensive. She’s basically falling in love and trying not to admit it to herself.

What does she do when she meets Neil’s wife for the first time?

She’s absolutely stunned by her own behaviour, because this is the first time she’s met Azra, and she’s drop-dead gorgeous, so it makes her feel ridiculous and absurd because she’s been having a little harmless flirting with Neil. Azra is obviously a lovely woman, and gorgeous, so it triggers Sarah’s insecurities and makes her act in a ridiculous way. The scene where they meet for the first time was fun to do, because that was the first day I met Laila.

What is it like, welcoming a newcomer into an established cast?

It’s nice, because I’ve been that person on other jobs so I know how it can feel. I wanted to make sure she felt welcome, but actually she didn’t even need my help because she’s so funny and natural. She’s very confident and brilliant, and fitted right in straight away.

Was it nice to be reunited with the others, especially after such an odd year?

It was so good, especially to see Jen, who’d come over from Canada. She was so happy to be in Manchester! She was so sad to leave when she was off to quarantine in Canada, before she got to go home. It was lovely to see everyone, and then all the new people as well. It was brilliant.

What happens throughout the rest of the series? I’m guessing that things get even more complicated between Sarah and Neil.

Her feelings get too big. She can’t ignore them, she can’t repress them, they’re spilling over. It becomes exciting and a bit of a whirlwind, and they really start to fall properly in love. They can’t deny it, yet they’re both married. This is the first time she has ever done anything morally reprehensible, and she’s shocked at herself, but at the same time she can’t help herself. Fuelled by something that Emma does early on in the series, it unconsciously spurs Sarah to do something irrational and spontaneous. She’s enjoying the spontaneity, but she can’t reconcile her own behaviour. There’s this love that she can’t help following, and she makes a lot of mistakes, but does enjoy herself as well.

She can be a bit uptight and annoying, as can I, but it comes from having set ideas and wanting things to be in order. When they aren’t, she feels very out of control and scared, which can come out as self-righteousness or defensiveness, and can make her a bit arsey. She’s sensitive at heart, but that doesn’t always come across.

One of the other joys of this series, of course, is this tight-knit cast of women.

It’s funny, because both Sarah and Kathy find it hard to talk about their emotions, yet they want to support each other and help each other. Not in a straightforward way, but in a way that’s almost off-kilter, so they’ll be talking about one thing but meaning another. I do like that they’re never in competition with each other; they want each other to thrive. I like that dynamic. Also, I really like working with Jen, because she’s so funny, and easy to be around.

Does it feel like things are improving generally within the industry for women?

It does feel like things are improving in the industry, and it’s definitely changed. It’s funny, because I was watching a show from the eighties, and noticing how little a woman’s voice was heard – it was all what the men thought about this subject, which should have been inclusive, but there were about 40 men and three women.

Do you think there are girls at home watching Traces and saying, “Yes, I can be a scientist, why not?”

Maybe. You are influenced by what you see on TV to an extent, especially when you’re young. Some passions come from within, and some come from cultural influences, so possibly.

Are you amazed by any of the facts you have picked up?

We were laughing our heads off at the condom lubricant database. “Why do we have to say ‘condom’ so often in this episode?” The word was changed a few times because it sounded so ridiculous. Add to that the fact that Sarah is falling in love with Neil, having to say ‘condom’ so often to each other was hilarious, there was something really adolescent about that. There are some things in life that are so absurd that you just have to laugh.

Did you enjoy being on location?

We shot mostly in Bolton, then we had a week in Dundee, which I loved because I didn’t get to go there in the first series, and I hadn’t been to Dundee in a long time. It’s such a friendly place, as is Manchester. We all stayed in Manchester, in the centre of town, and as we got towards the end of shooting there were a lot of other productions and I bumped into a few other actors. There’s so much happening in Manchester and Bolton, there was a back-to-school atmosphere. Everyone was glad to be out of the house, grateful to be working, and happy that we could all, as humans, socially interact together. My social interactions were really clumsy as I was out of practice! As actors, we get to take our masks off in the scenes where we’re not in the lab, but the crew always had their masks on, so I never knew what some people looked like for the entirety of the shoot. It’s so hard to read emotions and micro-cues in that situation, and it’s very alienating. I know for myself, when I’m wearing a mask, sometimes I feel I give up inside my mask. If I smile, or if I say something with my face, it doesn’t get responded to because they can’t see it, or vice versa. It’s soul destroying, that lack of connection. I saw that with some of the crew sometimes, and then other times you can see a little bit of a sparkle in their eyes. Some people smile with their whole face. There’s a lot of confusion, because everything takes longer when you can’t use visual cues.

It must have been a huge challenge.

Yes, it’s very challenging and confusing. But I’m grateful that we got to do it at all.

Is it nice to bring Dundee to the forefront of things?