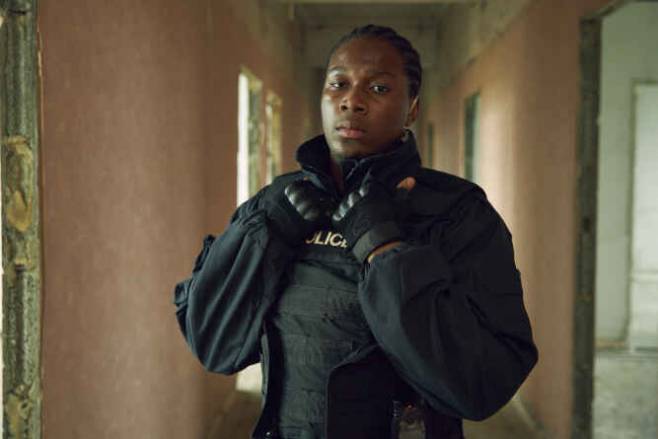 What first excited you about Trigger Point?

My agent sent me the script for episode one and it was just such a compelling read, I couldn’t put it down. It was so thrilling and such a different piece of drama for television, exploring a world that we really haven’t seen on TV before. There’s The Hurt Locker on the big screen, but no TV shows, and the world of the expo is incredibly dramatic. I knew it would be a big challenge to make, but I immediately wanted to do it.

How much research went into bringing the script to life?

Masses! I always want to get right inside the story and find out the reality of the lives we’re trying to portray. We worked closely with two expos, one still working in the field and one who has stopped. We had a lot of meetings with them, going through the scripts, asking about their work and home lives. We were still ringing them during ADR (after filming had wrapped), to check whether they would use particular phrases. I’m in awe of them and the work they do.

We also talked to a retired senior officer in the Met about the counterterrorism side of the storyline, to make sure we told that side of the story as accurately as possible, so the characters don’t feel like cliches.

And then we felt it was important to talk to a clinical psychologist about how someone like Lana does her job – how can you be the person who walks towards the bomb when everybody else wants to run away? What does it do to you as a human being? That’s one of the most fascinating parts of the story, the personal cost of the job.

From your research, did you get the sense that there aren’t many women in Lana’s job?

It’s not common at all. I think in the army it is, but not in the world of expos working with the police. It’s a very unique world, and female expos are very rare. For example, with the protective suit Vicky wears, we couldn’t find one made for a woman. The suit is so heavy and difficult to move and to walk in, there are also physical problems for a woman in that role. I think it’s important to explore what it’s like to be a woman doing a job like that, very much in a man’s world. It’s also a job that’s all about confidence, because if you lose your nerve then it’s over.

You must be proud of the casting in this series?

We always wanted Vicky to play Lana, I can’t imagine anyone else playing her, she’s amazing. Lana’s just so likeable and no matter how hard her job is, you want to be with her, and Vicky has that quality. She’s such a brilliant actress, and she’s been in amazing ensemble pieces, but she’s 100% centre stage in Trigger Point. The poor thing hardly had a day off, it was just so full on for her. Her story gets even more complicated as the episodes continue.

We worked with Des Hamilton for our casting, who is very into naturalism and street casting. We followed that through with our background casting too. Episode one is largely set on a council estate and 90% of the crowd are played by real residents. We hired somebody to spend a week there befriending people, and by the end of filming quite a few of the residents said it had been such a positive experience because they’d met their neighbours for the first time and made new friends.

How did you source the specific props needed for this drama?

We relied on the advice of the expos for the specific tools of the job, and we used a wonderful special effects company, who made the prop bombs for us. They looked after all the explosions and we always tested those on camera. But the big protective suit that Lana wears at the beginning of episode two and the bomb disposal robots you see throughout are both the real deal.

We borrowed the suit from the London expos, they brought it to set for us, and the robots are the ones they use too, so we had to book them in advance along with an operator. We wanted to portray this world properly and people are so savvy nowadays, everybody’s googling everything, so if a prop like that isn’t right then people will catch you out very quickly. All of those things have massive budget implications, but we had to get all of that equipment right.

How did you achieve the explosions?

We wanted to do as many of the explosions on camera as possible, rather than in post-production, and the first explosion of the series was one where we knew we only had one take. But we tested it, we’d seen it, and by the end I wasn’t worried, because our special effects team was so professional, we knew it would work. Some things we did have to do in post-production because we couldn’t risk damaging certain buildings.

There’s a big scene in episode two set in a mosque. Were there any difficulties filming in such a sacred building?

No, I’m determined that if a scene is set in a specific location then that’s the starting point for where you film it. It’s quite an important story as well, about how people immediately want to demonise certain people in society and make assumptions, which we do explore. So I felt it was a story that we could decently take to the owners of the mosque and explain our position. Of course, they wanted to see the script and they were happy that it was a responsible drama we were making. They were very happy to have us there, really supportive. We had to avoid filming around lunchtime prayers, but we worked around each other’s needs brilliantly. We used the real worshippers to be our background artists as well.

Was it challenging to find the right locations for this drama?

It was really difficult, probably the hardest thing about the whole production to be honest. We had to put filming on hold for a year, and then there was a COVID backlog of filming after lockdown, so we were in competition for locations all the way through the shoot. We really wanted to shoot in London itself though, because it’s a London story about a terrorist attack on the capital.

There’s some sensitive subject matter in the drama, were you mindful of that?

Yes, you have to be careful that you’re not using sensitive issues just to tell a good story – for me that would be irresponsible. We have to take a responsible approach as dramatists, so we were constantly checking each other and checking that we felt we were doing due diligence on how we were portraying the characters and the storylines.

Does this series have anything in common with Line of Duty at all, given that Jed and Vicky are reuniting?

The phrase “high octane thriller” comes up a lot! We didn’t want to be derivative in any way though, so we made a point of not casting people that have been in Line of Duty… and an awful lot of actors have been in that series over the years. Trigger Point is original.

Are there exciting twists and turns to look forward to?

Yes, we hope we leave the audience looking forward to the next episode. I haven’t produced a thriller like this for a very long time, so it’s kind of a new experience for me. I feel I’ve learned a lot about the concept of ‘the cliffhanger’ from Jed, I’ve had a tutorial at the hand of the master of that genre, that’s for sure!

Do you see Trigger Point as a returning drama?

That’s the idea. It’s certainly a concept that we feel we haven’t exhausted. Every day of an expo’s life is potentially exciting and thrilling, so it’s ripe for drama. I’m really looking forward to sharing Trigger Point with the world, I’m optimistic about how people will respond to it.