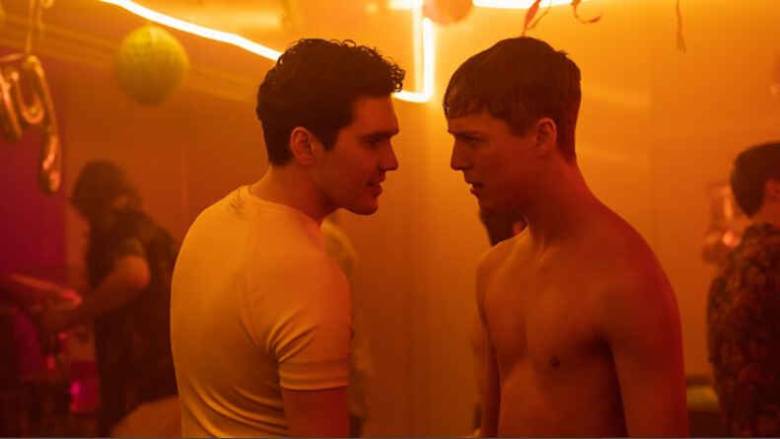 What did you make of Quacky?

Are you easily scared?

I’d like to think when it comes to the deeper stuff that I’m quite brave. I’m all good with the classic slasher movies, but I don’t like supernatural stuff – I watched The Invisible Man recently and it was terrifying, and I feel the same about films like Insidious.

Hands down, the original Halloween. Even that soundtrack gives me the chills to this day. Sometimes when I need to get into the mood of a certain character, I’ll play that because it’s so atmospheric.

Did you always fancy being in your own slasher series?

I’m up for anything. If it’s the right thing, the right people, the right vibe, I’m in. In the case of Wreck, the big draw was working with Chris again. Boys from County Hell was the last job I did before the pandemic and Chris always said that he’d want to work with me again. I didn’t have to audition, which felt like a step in the right direction.

Is it flattering that someone would look at Danny and think of you?

I’d like to think it wasn’t quite like that! I like to really focus when I’m working away, and initially an audition came through for the lead part of Jamie. I never auditioned in the end, but while I was in a ten-day hotel isolation in South Africa on another job, the role of Danny came up so I was up for it.

How would you describe Danny?

He seems to think a lot of himself, but he’s definitely misunderstood. There’s a picture painted of him from the outside but, much like a lot of people, there’s a deeper thing going on inside. He might appear to be one way, but he has a lot more heart than you might think.

What is Danny’s history with Pippa?

They’ve been in a relationship and, at the beginning of the show, they’re going through some difficulties. Danny very much loved Pippa and really misses her. There’s a bit where he brings a girl back to his room, then it flashes forward to the post-coital moments and he says, “you can stay if you want”. He’s trying to be cool and blasé, but I read into it that he really could do with the company.

Does he have a tribe on board ship?

Danny’s done a few tours of duty and got past the initiation period that Jamie is going through. Now he’s the one doing the initiations. He’s one of the cool kids who are like, if you want to be part of our team, you have to do what we say. But there’s a human under the bravado

What is Danny’s official job title?

He’s part of the entertainment crew, although that term covers a lot of bases. There are no actual scenes of me doing any of the singing and dancing, but I know people who’ve done a year on a cruise.

Were you tapping those people up for insights?

Not really. My girlfriend’s dad used to be an entertainer on a cruise ship, he would do comedy, singing, a bit of everything in a one-man show. He was very much into cruises and my girlfriend went on cruises a lot to visit him. But I’ve never been on a cruise. I don’t think it’s for me. If I’m away for a long job, I can usually look out the window and make little local connections. On cruises, you’re in different places every day. I love the ocean, but I’m too much of a home-comforts person for a cruise.

What will your girlfriend’s dad will make of Wreck?

I’m sure he’ll love it! It’s got charm and, with it being on BBC Three, it’s got that young feel. The killings hit hard, but there’s also comedy there.

How immersive was the set?

I had the worst start to that job ever! When I got there, I was already booked into my hotel and the producer rang me to tell me I’d got Covid, so I was in a hotel for ten days and couldn’t leave the room. It was pretty frustrating, but once I actually got on set, it was amazing.

What was the biggest challenge of the shoot?

It was quite cold, but we were supposed to be in the Bahamas in tight polo shirts and shorts and skirts. I was doing a scene in water and it was freezing cold: I went from being cold to more cold and then, after I got out, even colder. But I love getting stuck in, so it was a rush and a fun set to be on.