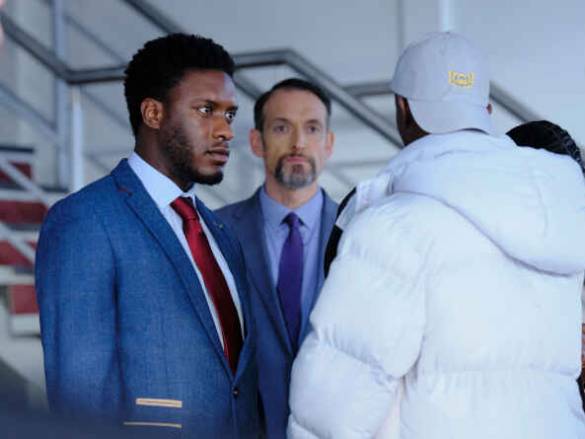 What were your first impressions of the story when you came to this project? What was really exciting about it?

What really engaged me when I read the script was firstly the universality of it. The fact that it’s really a love story. It’s about identity. It’s about stereotypes. It felt like a really timely story, but it’s also just about a man who falls in love with a woman and makes the wrong decisions and that’s what really drew me into it.

Can you set the story up for us so that we understand where we are and what world we’re in?

We are in South London, Camberwell, and we are with a young guy called Hero, who’s worked very hard, he loves his family. He’s a very successful car salesman. People trust him. He’s honest. He’s really stayed away from the gang culture that surrounds him. He’s aware of it but he’s deliberately avoided it, kept a low profile and his life is going well. Then he’s on a bus one day and he sees a young woman reading a book and his life changes from that point on.

Due to loyalty to family members, on her part and on his, and his loyalty to her, he makes decisions which get him and her into a very tricky situation. As a result, he finds himself in the dock for murder. He fires his barrister and presents the closing speech to us, the viewers. At the end of the day, we have to decide. Is he guilty? Is he not? Is he a victim of circumstance? Is he a victim of love? And that’s where we are with a young man who’s never named. Having been pulled out of his very clean-living life into the dark side of South London.

How do you go about casting the show? Did you use the novel as inspiration?

We didn’t go exactly to the description of the characters in the novel. It’s all about the performance and who in the room really wows the casting director Gary Davy, the director Sarmad Masud, and exec Ruth Kenley-Letts. It was about getting those people in the room and seeing that passion, that belief, people that we could watch and really believe in, and seeing the chemistry between some of the characters. It’s all about the best person for the job and the person who believes and can portray that character.

The cast is full of brilliant, rising stars. How exciting is it to be able to see them develop over the course of the production?

They’ve developed enormously. I mean, in the middle of our production, one of our cast (Bukky Bakray) received a Bafta! It’s been fantastic. I saw Samuel in a film a few years ago called The Last Tree and was wowed by him. I was on an RTS panel for a film called Sixteen, which Roger starred in, and then watching Bukky, and bringing across Sophie from Australia, she’s a really exciting talent. All four of them are at different stages, but all rising fast in their careers and getting all those energies in the room together was fantastic. Also seeing them mentor and support each other has been great.

You Don’t Know Me is portraying today’s London, and yet was filmed in Birmingham. What made you choose Birmingham as the location?

Why Birmingham? Having researched a number of cities in the UK, Birmingham is England’s second city and is incredibly diverse. It’s huge. The architecture is very similar in many places to London. So we worked with Sindy from Film Birmingham very closely, recceing with our location manager Rebecca, and discovered that we could find Camden streets, tower blocks, all sorts of areas that really worked for us. We originally intended to shoot a week of shots in London, but that came down to a couple of days because Birmingham worked so brilliantly.

This story has council estates, high-rise flats, a courtroom environment. What makes it not a gangland drama?

It’s the relationships, it’s the family relationships. Our designer Robert Foster brought such character into sets. You walk into the sets and you don’t see a stereotypical Peckham or Camberwell block. You can immediately walk in and sense the character of Kyra, of the mother, of our lead actor, Hero. You walk into a world where you’re making assumptions, and when you open the door and it’s not what you expect. And even the court setting is not traditional wood panelling, it is very modern. We wanted to surprise people.

Why did you decide to build some of the sets rather than film on location?

In practical terms, the pandemic has played a massive role. The amount of people that are involved in a scene is maybe 20 people, and physically having that amount of people in the space in an actual location, even a courtroom location is quite difficult under pandemic conditions. We’ve upscaled the flats to give us the space to work.

You filmed the show during the pandemic, how did you cope with Covid restrictions that were in place?

It was tough. There are financial and practical issues and time issues, allowing for testing, slowing things down to enable fewer people to be on set at a time. I think the biggest impact is the effect on people’s mental health and stress levels. That’s been a really big learning curve, to be working with people who haven’t been working for a year, who we are imposing quite strict regulations on and trying to guide them through it. It’s about everybody being honest, supportive, and communicative.

You have adopted a comprehensive training programme across this production. Can you tell us a little bit about the driving force behind this?

For me, coming to Birmingham as a regional production base, it was important to be aware that there’s so much potential here that isn’t actually being developed. We worked closely with Film Birmingham and we wanted to expose people to what we’re doing, but we couldn’t have them on-site because of Covid, so we developed an extensive remote training programme.

We reached out to groups for carers, disability organisations, who work with neurodivergent people. Our 10 participants were involved with remote schemes and met with the heads of department all the way through the process. Every day they got a call sheet, every script amend, every schedule and every week they got a one-hour session with a head of department and they can link it all together. And then we did have one day when we could bring them on set on a non-shoot day and it was just so exciting to see their reactions and how much they enjoyed the experience of being there.

Do you think this scheme will set a precedent for other productions?

Very much so. Film Birmingham, and the BBC specifically, are excited by this. This scheme is unique because it’s not reaching out to the usual suspects. We’ve reached out to people in other areas of work, we’ve got members of my crew who’ve come out of other industries that have been shut down during the pandemic. We’re developing in all departments in different ways.

I think that’s unusual and I think it’s been great Snowed-In Productions have come on board with that.

What message do you think the show is trying to bring to the British audiences?

I think they need to come away thinking, ‘I shouldn’t make assumptions about people’. It’s not always what you think. Just stop and question your assumptions. It’s actually something that Kyra says to Hero a couple of times, you don’t know why people are where they are. You don’t know what’s happened in their lives to put them there. I think that’s such an important message that Kyra gives him and which the show gives to us. Don’t jump to conclusions. Just stop and think. You might be right, but actually you’re probably going to be wrong. Or you won’t know the full picture until you’ve watched all four episodes.