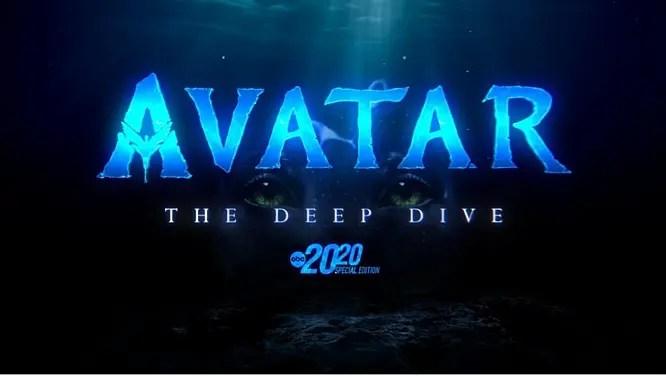 ABC News announced, “Avatar: The Deep Dive, A Special Edition of 20/20,” a new primetime special edition of “20/20” that features exclusive behind-the-scenes access to the powerhouse film franchise through the eyes of legendary director James Cameron. In a revealing interview with ABC News contributor Chris Connelly, Cameron recounted the world’s reaction to the first-of-its-kind film “Avatar” more than a decade ago, his challenges making the highly anticipated sequel, “Avatar: Way of the Water,” and his plans for three additional installments.

The one-hour special also includes interviews with stars Zoe Saldana, Sigourney Weaver, Kate Winslet, Zoe Saldana, and Stephen Lang, who describe their experiences working with Cameron and the signature motion-capture technology. Weaver, who is returning as a new adolescent character, explains how it felt to play one of the youngest characters in the sequel and how she tapped into her own childhood for the role. Academy Award® winner Kate Winslet talks about her long-awaited reunion with the director and why she was eager to join the project, playing one of the leaders of an undersea Pandora clan. In rare behind-the-scenes footage, the cast is seen undergoing months of intensive free-diving training with renowned free-diving expert Kirk Krack to give full underwater performances.

The program also introduces the next generation of actors joining the “Avatar” world, including Jamie Flatters, Bailey Bass, Jack Champion, and Trinity Bliss, who open up about joining the legendary franchise. Additional interviews include producer Jon Landau, casting director Margery Simkin and more.

In celebration of the release of “Avatar: The Way of Water” on December 16, Disney and “Avatar” launched the global “Keep Our Oceans Amazing” campaign to raise awareness of the challenges facing our oceans and marine life. The campaign will support The Nature Conservancy and its work to protect 10 of the world’s oceans’ amazing animals and their habitats, connected to the beauty of Pandora – the imaginary setting of “Avatar.” “Avatar: The Deep Dive, A Special Edition of 20/20” airs Tuesday, December 13 (10:00-11:00PM EST), on ABC, next day on Hulu.