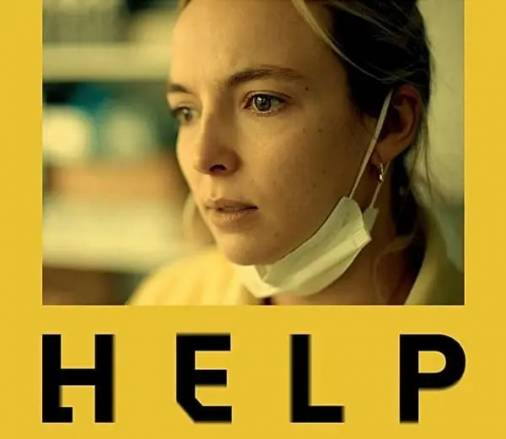 In the film Help, young care worker, Sarah (Emmy(R) winner Jodie Comer, Killing Eve, Free Guy), forms an unlikely bond with nursing home resident, Tony (Stephen Graham, The North Water, Line of Duty), living with young onset dementia. But when the Covid-19 pandemic hits, her character and their relationship are put to the test under horrifying circumstances. Help, which recently won the Rose d’Or Award for Best Drama, premieres Monday, January 31 on Acorn TV. See below for a personal note from the writer Jack Thorne, explaining how the film came to be.

Sarah (Comer) has few qualifications and prospects in life, but she finds confidence, unexpectedly, working as a care assistant in a nursing home. She has a special talent for looking after the residents; in particular, Tony (Graham), who is only 47, but has early-onset dementia which causes him moments of confusion and aggression that the other members of staff find hard to handle. They begin to build a real bond, but everything Sarah has gained is thrown into doubt with the arrival of the Coronavirus pandemic. Sarah and her colleagues have to fight tooth and nail, ill-equipped, and badly lead by an overwhelmed manager (Ian Hart, The Terror, The Last Kingdom) to try to protect the residents. Confronted with the grim and imminent reality of losing Tony, Sarah may have to go to extreme measures to save her friend.

Statement from the Writer – Jack Thorne

Help was written in extreme anger about the state of care – not just in the UK but around the world – and the lack of priority it was given around the world. Too many disabled people died in the pandemic because their needs weren’t prioritized. It was also written as a love song, to the care industry, my mom was a carer and I saw firsthand the beautiful effort she put in to looking after her clients and residents. An underpaid job, that is vital in our times, and those that kept going into those homes, despite of the risk to themselves, and despite the poor pay, are our true heroes.

Doing research for this was a process unlike any other. I’ve written bleak stories before, but very few when the temperature of the room was still so hot. There is no doubt that many carers and residents are still struggling with shielding and with PTSD and I do think TV – that vital empathy box in the corner of the room – can help to shed light on this, and hopefully lead to an increased focus on the needs of the care home.

It started as a provocation from Stephen Graham, write something for me and Jodie, write something about Liverpool. As it grew so we all took authorship of it, and we all grew together, inspired by the firsthand stories we were hearing. I am immensely proud of what we all made.