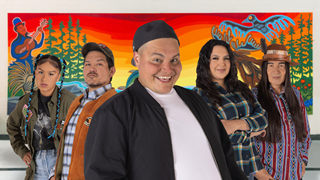 There’s no place like CTV Comedy this fall when the brand-new original series ACTING GOOD premieres Monday, Oct. 17 at 10:30 p.m. ET/PT. The 10-episode, half-hour irreverent comedy is loosely based on the life of Anishinaabe stand-up comedian Paul Rabliauskas. Shot on location in Manitoba in Spring 2022, Rabliauskas stars as Paul who, after a botched attempt to move to Winnipeg, retreats back to his eccentric family in the fly-in community of Grouse Lake First Nation. ACTING GOOD is co-created by Rabliauskas, Amber-Sekowan Daniels, Eric Toth, and Pat Thornton, and produced by Kistikan Pictures Inc., and Buffalo Gal Pictures.

“For a quarter of a century, CTV Comedy has proudly featured authentic, fresh, and hilarious homegrown talent and we are excited to add ACTING GOOD to this legacy of stellar original comedies,“ said Pat DiVittorio, Vice-President, CTV and Specialty Programming. “With Paul’s relatable story and disarming spirit, we know viewers will be instantly charmed by the offbeat residents of Grouse Lake.”

In the series premiere, “Just Fok’n Missing Her” (Monday, Oct. 17 at 10:30 p.m. ET/PT), the news of the day in isolated, remote Grouse Lake is the anti-bullying workshop, where the lure of free sandwiches guarantees a decent turnout. However, the event is overshadowed by Paul’s unexpected return, as the community raises eyebrows over his social media posts about living large in the big city. The series premiere is directed by award winning actor, director, and choreographer, Michael Greyeyes.

Viewers can stream new episodes of ACTING GOOD on CTV.ca and the CTV app, which is also features behind-the-scenes videos, cast highlights, and more information about ACTING GOOD.

ACTING GOOD joins the CTV Comedy family on the channel’s 25th anniversary as the brand continues to reign as #1 Canadian Entertainment Specialty Channel with key demo A25-54 for the fourth year in a row. Since launching on October 17, 1997 as “The Comedy Network,” the brand has committed to showcasing supporting homegrown talent, from up-and-coming comics to veteran stand-ups.