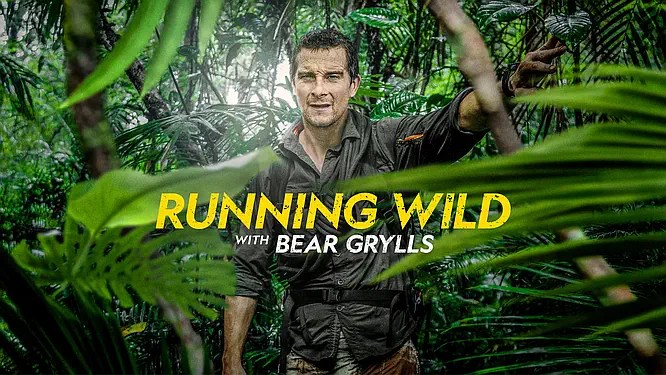 Fan-favorite survivalist Bear Grylls is back with more bold and exciting episodes of the hit series “Running Wild with Bear Grylls.” Except this season, he is kicking things up a notch by introducing RUNNING WILD WITH BEAR GRYLLS: THE CHALLENGE. Premiering on National Geographic and Disney+, Bear takes the daring adventures up a level by teaching celebrity guests essential survival skills that they will have to master and then prove they can use in a high-stress situation.

This season, guests will not only be pushed physically and mentally – like plunging into a frozen lake in the Canadian Rockies or foraging for food in the deserts of the Great Basin – but Bear will be testing each on their survival skills. This time, they will be tested beyond other guests: after Bear teaches each of them a key set of skills, they will then have to master them on their own and deploy those skills at a high-intensity moment to earn their extraction from the wilderness.

The celebrity guest lineup and challenges include the following:

NATALIE PORTMAN IN SOUTHERN UTAH
Premieres July 25 @ 9/8c on National Geographic
Streams August 10 only on Disney+
Bear takes Academy Award® winner Natalie Portman into the slot canyons of Southern Utah. Their adventure begins when Bear leaps from his helicopter onto Natalie’s 4×4. They trek into the Escalante desert, where Bear teaches Natalie piton placements, rope system transfers, and fire-starting while descending various canyons. Natalie uses her new skills as they ascend a mountain and attempt to light a signal fire for extraction.

SIMU LIU IN THE CANADIAN ROCKIES
Premieres August 1 @ 9/8c on National Geographic
Streams Aug. 10 only on Disney+
Bear takes Marvel superhero Simu Liu to the Canadian Rockies. As the adventure begins, they must trigger an avalanche to clear a path to a ravine and find an old cabin or risk hypothermia as temperatures drop below -20. The next day, Bear sets the ultimate arctic challenge: Simu must strip down to plunge into a frozen lake and then navigate to a dogsled team to whisk them back to civilization.

ASHTON KUTCHER IN THE COASTAL JUNGLES OF COSTA RICA
Premieres August 8 @ 9/8c on National Geographic
Streams Aug. 10 only on Disney+
Ashton Kutcher joins Bear to challenge the coastal jungles of Costa Rica. Their adventure begins with a helicopter jump into the Pacific Ocean. Once they swim ashore, they must canoe up a river to fish for their dinner, then descend a 300-foot cliff into the jungle. The next day, Bear sets up a commando crawl rope challenge. Ashton must use all the strength he can muster to cross a massive ravine.

FLORENCE PUGH IN THE VOLCANIC RAINFORESTS OF COSTA RICA
Premieres August 15 @ 9/8c on National Geographic
Streams August 10 only on Disney+
Rappelling from a helicopter, Bear takes Florence Pugh to the volcanic rainforests of Costa Rica. Bear shows Florence how to traverse rapids, test river depth with a rope and rock, and avoid poisonous snakes and deep cliff edges. Crossing an alligator-infested swamp, they catch eel for dinner. On day two, Florence must test the depth of a waterfall pool before choosing to leap from a high cliff into a set of rapids below. Finally, they jump out of an airplane @ 10,000 feet to their extraction.

ANTHONY ANDERSON IN THE SIERRA NEVADA MOUNTAINS
Premieres August 22 @ 9/8c on National Geographic
Streams August 10 only on Disney+
Anthony Anderson joins Bear in the Sierra Nevada mountains. Tossing their backpacks from the helicopter, Bear challenges Anthony to survive with just a rope and compass. On the ground, Bear teaches Anthony navigation and knot-tying skills. On day two, Bear leaves Anthony to use his new skills to secure his climb up a sheer rock face. Anthony will dig deep to make it to their extraction point.

ROB RIGGLE IN THE GREAT BASIN DESERT
Premieres August 22 @ 10/9c on National Geographic
Streams August 10 only on Disney+
Bear puts Rob Riggle through survival tests in the Great Basin to prepare for Rob’s latest movie role. They begin by rappelling from a helicopter to travel west, where Riggle learns the ropes and then faces an even bigger ropes challenge. Once on the canyon floor, Bear teaches Rob river crossing skills, foraging for food, and building a rudimentary shelter. The next day, Rob must evade being spotted by Bear or face his fear of skydiving.

RUNNING WILD WITH BEAR GRYLLS: THE CHALLENGE was developed by Bear Grylls and Delbert Shoopman. The series is produced by Electus, a Propagate Company, and The Natural Studios. For Electus and The Natural Studios, Bear Grylls serves as executive producer along with Chris Grant, Drew Buckley, Ben Silverman, Howard Owens, Liz Schulze, Rob Buchta, and Delbert Shoopman. For National Geographic, Bengt Anderson and Sean David Johnson are executive producers.