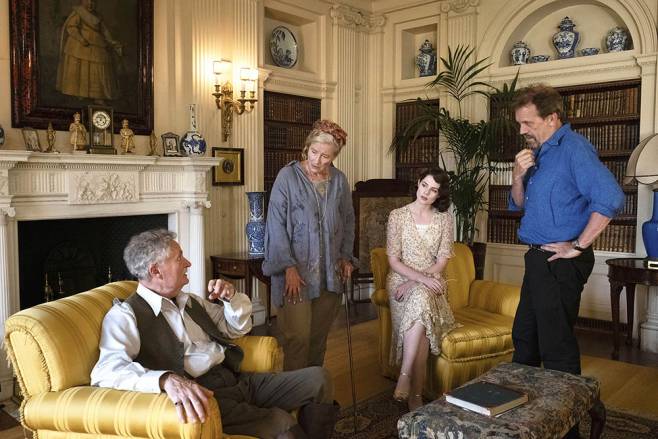 Why Didn’t They Ask Evans?, a three-part adaptation of Agatha Christie’s 1934 novel starring Hugh Laurie, will premiere exclusively on BritBox UK this Spring.

BritBox North America commissioned the series, which is produced by Mammoth Screen and Agatha Christie Limited.

Bobby Jones, a young navy sailor, is played by Will Poulter (The Revenant, Detroit, Dopesick), and Frankie Derwent, a prototype It Girl with a love for adventure and beautiful hats, is played by Lucy Boynton (Sing Street, Murder On The Orient Express, Bohemian Rhapsody).

Why Didn’t They Ask Evans? is based on Christie’s 1934 novel. The story begins with a classic Agatha Christie puzzle: a man lies dying at the bottom of a cliff, supposedly the consequence of an accidental fall; with his final breath, he asks the puzzling question of the title and then passes away. Some people, possibly the majority, might brush off the words’ unfathomable strangeness and go on with their lives. Most people aren’t like Bobby Jones and his childhood pal, Lady Frances “Frankie” Derwent. They make the decision to honour the deceased by decoding and answering his final question. They discovered a dark plot of deception, betrayal, and – maybe unsurprisingly – murder in the process.

Conleth Hill (Game of Thrones) and Daniel Ings (I Hate Suzie) join Poulter and Boynton in the series as Bobby’s friend and mentor, Dr. Thomas, and Roger Bassington-ffrench, the focus of the amateur sleuths’ early suspicions. Moira Nicholson, the unhappy wife of the domineering Dr. James Nicholson, is played by Maeve Dermody (The Secret Garden), and Ralph “Knocker” Beadon, one of Bobby’s former shipmates and a fine man in a tight corner, is played by Jonathan Jules (Small Axe).

Hugh Laurie will play Dr. Nicholson, the Clinical Director of the sanatorium near Merroway Court, in addition to directing.

Endeavor Content will handle international sales outside of the UK, Ireland and the Americas.