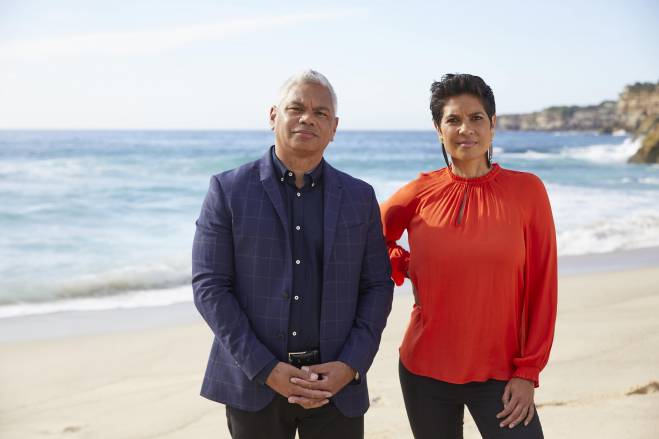 National Indigenous Television (NITV), and the wider SBS network, invite communities to deepen their understanding of January 26 and what it means to be Australian through the upcoming programming slate, Always Was, Always Will Be.

A schedule curated to highlight themes of Country, Identity and Nation will be featured throughout the week, January 19-26, across SBS channels, including documentaries, news, movies and more.

The Sunrise Ceremony, presented by The Point hosts John Paul Janke and Narelda Jacobs, will air live from Bundjalung and Yugambeh Country in Coolangatta, QLD on Wednesday 26 January at 6:00am, and will mark the commencement of a daytime simulcast of programs across NITV and SBS.

The beautiful and insightful program is led by First Nations perspectives, and includes reflections from non-Indigenous and multicultural voices on Australia’s past, present and future. Guests will include Wik and Soloman Islander man and musician Ziggy Ramo, Munanjahli and South Sea Islander woman and Associate Professor Chelsea Watego, and prominent journalist Kerry O’Brien. The Sunrise Ceremony will also be simulcast on Channel 10.

A short introductory film titled The Land We Live On will be broadcast prior to the Sunrise Ceremony at 5:55am. In the short film, eight year old Wiradjuri filmmaker Penelope Towney will perform an Acknowledgement of Country for the Dharawal and Yuin Nations, followed by a short reflection on the significance and meaning of a Welcome to Country and Acknowledgement of Country.

At 7:30pm on Wednesday January 26, TikTok will partner with NITV in a live concert – TikTok and NITV Present: First Sounds. Hosted by Tyrone Pynor, Bianca Hunt and Grayson McCarthy-Grogan, the concert will feature a specially curated line up of both emerging and established artists including Barkaa, JK-47, Nooky, Becca Hatch, Jesswar, Kobie Dee, Dallas Woods, Kaiit and more. In this innovative cross platform simulcast, communities across Australia will have more access than ever to these performances and celebration of culture. TikTok and NITV Present: First Sounds will be simulcast on NITV and SBS Viceland, and will also be live on NITV’s TikTok, @nitv.

At 9:30pm, Larissa Behrendt’s documentary Araatika! Rise Up will have its free to air premiere, simulcast across SBS and NITV. The documentary explores how a group of NRL greats came together to create a new pre-game ceremony in response to the Maori Haka – one that could celebrate Australia’s First Nations cultures. After fellow Indigenous players Preston Campbell, Timana Tahu and George Rose devised their own pre-game performance, Dean Widders began a journey to bring this dance – and First Nations pride more broadly – to the game.

“NITV proudly reflects and celebrates Australia’s diverse First Nations peoples, showcasing our experiences, perspectives and contributions. This year’s January 26 programming across the SBS network will reflect this once again, providing a platform for our voices to be heard, for an honest reflection of this country’s history and what’s needed for a more united and equal future. We invite all Australians to come together to join the conversation.”

On Tuesday January 25 Natalie Ahmat will host a special edition of NITV News, NITV News: January 25, which will bring audiences a wrap of events and national conversation leading into the channel’s Australia Day, Survival Day and Invasion Day coverage on January 26. At 8:00pm, Karla Grant will host a special episode of Insight – Insight: ‘Indigenous Incarceration’ was created in response to Dean Gibson’s powerful documentary, Incarceration Nation, broadcast on NITV and SBS in 2021,and in this special episode of Insight, audiences hear of the personal struggles of people who have spent time in prison and from families whose loved ones have died in custody, as well as those working to reduce the incarceration rates and deaths in custody of First Nations people.

NITV News will provide rolling news coverage on January 26 from every corner of the country throughout the day, accessible on air, via Facebook Live and through SBS Radio, with coverage starting with a 30-minute program at 11;30am. The coverage will conclude at 6:00pm with a full wrap up of the day’s news, which will be simulcast on SBS. News and opinion pieces will also be accessible through NITV’s website and social media pages.

SBS Radio will also be exploring what January 26 means to Aboriginal and Torres Strait Islander peoples, and helping people to learn about the Country they’re on, with articles covering these topics published in more than 60 languages online.

SBS Voices will publish memoir pieces from the SBS Emerging Writers’ Competition, including pieces from Aboriginal and Torres Strait Islander writers, as well as narratives from migrant perspectives about learning to belong in Australia.

Each night at 7:30pm from January 19-25, NITV will air a selection of content curated around the theme of ‘Identity’, including a selection of Who Do You Think You Are episodes featuring Casey Donovan, Troy Cassar-Daley, Uncle Jack Charles and Ernie Dingo, as well as the music documentary Gurrumul and classic film Storm Boy. Likewise, at 8:30pm from January 19-25, NITV will air a curated collection of ‘Nation’ themed programming, which will highlight stories from our past and present, including History Bites Back, Looky Looky Here Comes Cooky, We Don’t Need a Map, Incarceration Nation, Robbie Hood and Occupation Native. At 10:00pm each night, audiences can tune in for a selection of classic movies such as Ten Canoes, Tuduwali, Jedda, Toomelah, Radiance and Sweet Country.

Following Insight: ‘Indigenous Incarceration’, Warwick Thornton’s award-winning series The Beach will return to NITV in a marathon format at 9:30pm. Following the marathon, the third season of critically acclaimed documentary Bamay will air at 11:50pm in its entirety, providing viewers with aerial footage of Australia’s most stunning and diverse landscapes alongside factoids about Country as the evening leads into Wednesday January 26.

Viewers can also head to SBS On Demand for the full day of programming, including the Sunrise Ceremony and Tik Tok and NITV Presents: First Sounds. Additionally, SBS On Demand will house curated collections of programming including a selection from Araatika! Rise Up’s Dean Widders, and a collection of documentaries that reflects the history of protest in Australia.

SBS World Movies have curated a collection of films based on Country, Identity and Nation including Satellite Boy, Storm Boy and Samson and Delilah which will air from 6:00pm on Wednesday January 26.

SBS Food will also air a selection of programs throughout the day, including Indigenous cuisine themed episodes of The Cook Up, Kriol Kitchen and the channel premiere of The Beach.

Following the week, The Point will return for 2022 on Tuesday February 15 with Sunrise Ceremony hosts John Paul Janke and Narelda Jacobs reprising their co-hosting roles.

Follow the conversation on social media on the day using #AlwaysWasAlwaysWillBe.

Tune into SBS and NITV’s large slate of programming on January 26.