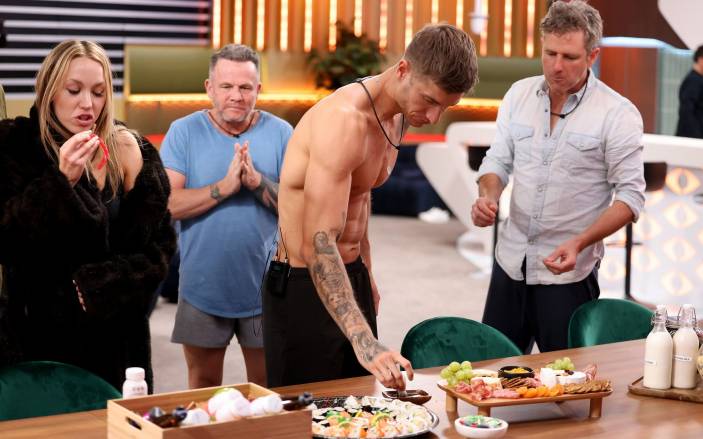 Caitlyn’s decision to give Ellie the gift of immunity didn’t sit well with Jess and Imogen. Imogen noted, “Ellie has been safe a couple of times now and I know it is riding on a couple of people’s nerves.”

Jessika added, “I would be lying if I said I am not a little bit salty about it.”

With Caitlyn gone, Danny stepped up his gameplay, trying to build connections with the rest of the VIPs. Danny wanted to work with Luke and Josh, but his “NASA-smart” senses told him Bernie wanted him out.

With the VIPs still desperate and “hangry”, Big Brother announced a food task with delicious meals up for grabs if pairs of housemates successfully carried a ball from the hallway to the backyard without using their hands. Thomas and Josh won a sushi platter, Ellie and Jess scored an ice-cream Sundae before Ellie tried her luck again, teaming up with Imogen to win a tray of Kombucha.

During a quiet moment, Josh and Ellie bonded over the recent loss of their fathers, with Ellie revealing that she had become estranged from her family after her father’s death: “Nothing I will ever go through will be as hard as what I went through with my Dad. Ever. He was an awesome Dad, too, by the way. He was amazing. After my dad died, I moved on from my mum and my family. It was the right thing for me.”

Josh shared he was still feeling the loss of his father who battled depression and chronic back pain, telling Big Brother: “I don’t think I have cried in the past four years since my Dad passed away. I am here for my Dad who loved the show and I just want to make him proud.”

The next day, Danny woke up feeling nervous about his position in the Big Brother Hotel. As the last one to enter, he became aware he might be the next out and began throwing grenades to remove the target from his back, starting by telling Bernie point-blank that he would nominate him.

Despite going head-to-head with Bernie in Big Brother’s next challenge, Danny failed and was left scrambling to save himself from eviction. Ultimately Danny lost the battle and was voted out, saying: “I am obviously devastated. I don’t like to lose, and I lost. If I just survived tonight, I felt I could have gone a long way in the game, maybe to the podium this time.”

Tomorrow night on Big Brother VIP: The night they were never ready for. Surprise after surprise rocks the VIPs, but what lies behind the bookcase with have them shocked. Who will make the great escape?