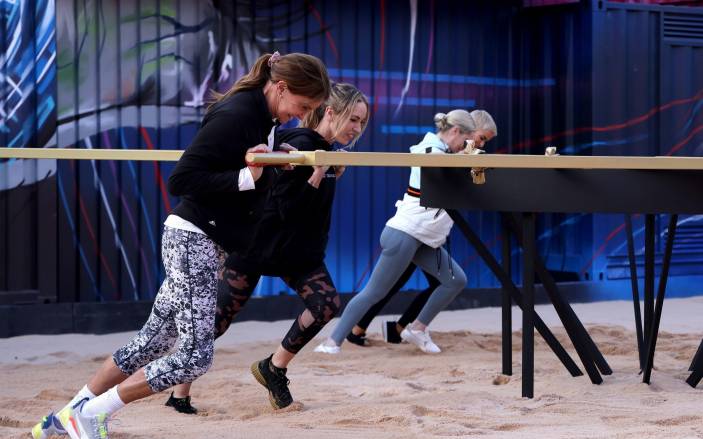 Last night on Big Brother VIP, Caitlyn Jenner and Ellie Gonsalves crushed Big Brother’s top-secret mission rescuing Imogen and Luke from the half-way room and returning the pair to their beds undetected by their fellow housemates.

For conquering their mission, Big Brother anointed Caitlyn and Ellie team captains and tasked them with selecting their teams for the next two nomination challenges. Helping Ellie and Caitlyn learn more about their fellow housemates, Big Brother enlisted Fitzy and Wippa to grill the VIPs, and some top-shelf tea was spilled!

Earlier in the day, Jessika Power told her housemates that Aussie cricketing legend Shane Warne had slid into her DMs, “Shane Warne, mate, he’s a freak. Some of the things he was sending me, I tell you what – inappropriate!”

Fitzy and Wippa invited Jessika to share the content of the messages. Hesitantly, Jessika replied, “It’s very X-rated. I don’t think I can tell you. Something to do with being naked, facing a wall and on knees. A bit graphic, you know, a bit X-rated. I didn’t like that.”

Upon hearing Jessika’s story, fellow housemates Ellie and Imogen Anthony shared that Warne also DM’d them. Ellie said, “He DM’d me all this stuff,” while Imogen added, “He DM’s everyone filthy stuff. He DM’d me back in the day when I was with Kyle.”

With the VIP grilling complete, Caitlyn and Ellie chose their teams and went head-to-head in the Big Brother VIP colosseum, where Caitlyn’s team of Thomas Markle, Matt Cooper, Imogen and Jessika snatched victory – leaving Caitlyn to choose who was up for nomination.

In the diary room, Caitlyn nominated Dayne Beams, Bernard Curry and Omarosa for eviction. Omarosa was ousted despite a last-minute blindside effort from Luke Toki to swing the votes onto Dayne.

In an electrifying twist, Omarosa discovered a large power cable on her way out and, after plugging it in, powered up a secret control room and unwittingly unleashed the game of Danny “The General” Hayes, one of the greatest Big Brother players in history.

Tomorrow night on Big Brother VIP: Team Ellie is back for revenge, but it’ll take a Herculean effort to get even one team to the finish line. Danny “The General” Hayes returns to the battlefield and two strategic heavyweights come face-to-face for the first time.

Big Brother VIP – 7.30pm Monday to Wednesday on Channel 7 and 7plus