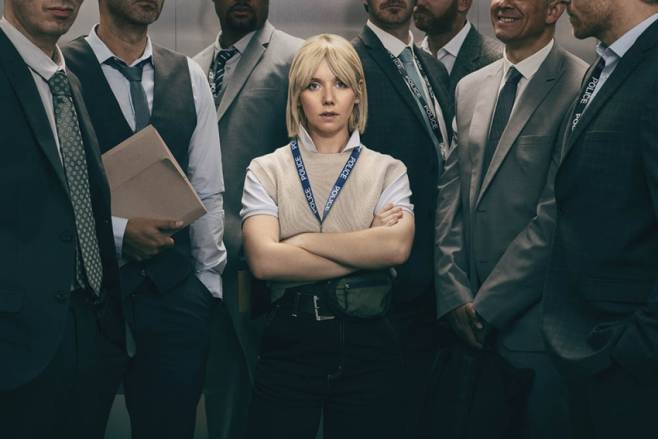 BritBox, the undisputed home of the largest collection of exceptional and unmissable streaming British entertainment globally, has a few tricks and treats up its sleeve this October with two thrilling new BritBox Originals. From award-winning writer James Graham (Quiz and Brexit: The Uncivil War) comes the captivating crime thriller, Sherwood, premiering on October 4. With an all-star cast featuring Lesley Manville (Mum, Phantom Thread), Joanne Froggatt (Downton Abbey), David Morrissey (The Walking Dead) and Kevin Doyle (Downton Abbey), the series is drawn from real-life events and is a shockingly relevant thriller about a burgeoning lack of trust in local police and national government.

On October 25, the next great British female detective comes forward in Karen Pirie, starring Outlander’s Lauren Lyle. Based on the best-selling novels by Val McDermid and adapted by Emer Kenny (Father Brown), the drama centers on a brilliant young Scottish detective, DS Karen Pirie, who has been newly promoted and tasked with reopening a murder investigation that has been the subject of a controversial true crime podcast. Twenty-five years later, someone is willing to risk everything to keep the secrets surrounding the case hidden.

From award-winning writer James Graham (Quiz and Brexit: The Uncivil War) comes this captivating crime thriller, drawn from real-life events, featuring David Morrisey (The Walking Dead), Lesley Manville (Mum, Phantom Thread), Joanne Froggatt (Downton Abbey) and Kevin Doyle (Happy Valley). A complex political past means that the industrial villages around Sherwood Forest have often been divided communities. But when two local residents are killed, old wounds are reopened and the town is engulfed in tension and fear. Soon everyone is under suspicion, neighbours are turning on neighbours, and no one can be trusted – especially not the authorities. It’s down to local police chief Ian and London met police offer Kevin to solve the case and unravel the lies. Can they put their own troubled history aside and help this fractured community heal? Drawn from real-life events, Sherwood is a shockingly relevant thriller about a burgeoning lack of trust in local police and national government – and the way that supposedly long-buried political tensions can resurface to devastating effect.

Critically acclaimed, BAFTA and Rose d’Or winning contemporary comedy, Toast Of London, sees Matt Berry (What We Do In The Shadows) play Steven Toast, an eccentric actor with a checkered past who spends more time dealing with problems off stage than performing on it. Steven Toast is a RADA-trained actor living in the heart of Soho’s theatre land. Currently living with another middle-aged actor because his wife has thrown him out, Toast’s life is not going according to plan. With the often-misguided assistance of his old-school ‘retro’ agent Jane Plough (Doon Mackichan, Plebs) and peculiar flatmate Ed Howzer-Black (Robert Bathurst, Downton Abbey), Toast faces a multitude of obstacles in his quest for fame and recognition. These include murderous director Acker Herron, arch-nemesis Ray Bloody’ Purchase, submarines, Bruce Forsyth lookalikes, obsessive hoarders, Freemasonry, and the real Michael Ball.

The heavyweight of comedy chat, Jonathan Ross, gets up close and personal with A-list stars in this no-holds-barred talk show. For over two decades, Jonathan has been a giant of the television landscape, winning massive audiences for every show with his celebrity guests, live music and trademark humour. From the light entertainment shows that made him a household name to film reviews, comedy panel shows and hosting awards ceremonies, Jonathan Ross is showbiz. His charming style means he gets far more from his guests than any other interviewer, as stars spill their secrets. Must-watch TV has never been so much fun.

Starring Lauren Lyle (Outlander) and adapted by Emer Kenny (Father Brown) from the celebrated crime writer Val McDermid’s best-selling series of novels, the drama centers on DS Karen Pirie (Lyle), a truly contemporary and brilliant young Scottish detective with a quick mouth and tenacious desire for the truth. In this opening story, based on the first Karen Pirie novel, The Distant Echo, newly promoted Karen is tasked with reopening a murder investigation that has been the subject of a controversial true crime podcast. When teenage barmaid Rosie Duff was found brutally murdered in a St. Andrew’s graveyard in 1996, suspicion fell on the three students who discovered her body. But with a lack of forensic evidence, no charges were brought, and the investigation floundered. Twenty-five years on, someone is willing to risk everything to keep the secrets surrounding the case hidden. Do the three men know more than they previously revealed? How flawed was the original investigation? And can Karen uncover the truth of what happened to Rosie that fateful night?

Sean Bean (Time, Game of Thrones) stars as John Marlott, a police officer who makes the horrific discovery of a corpse made up of body parts from eight missing children. The series follows the detective as he attempts to hunt down a serial killer, launching an investigation that opens up a sordid underworld. As the investigation wears on, Marlott becomes consumed with catching the killer at the expense of everything else. The series also features Richie Campbell (Grace), Ryan Sampson (Plebs), Ed Stoppard (Upstairs Downstairs) and Vanessa Kirby (The Crown).