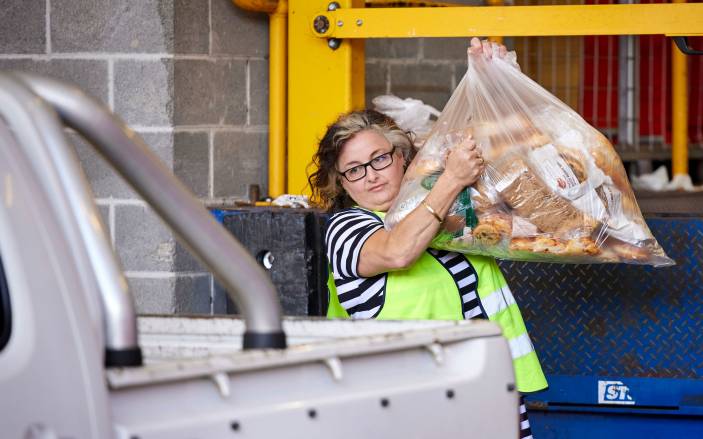 If you were relying on welfare to survive, what would you use it for? Rent? Food Medicine? Bills? In 2020, over three million Australians were recorded as living below the poverty line.

In the new three-part documentary series, Could You Survive on the Breadline?, three prominent Australians are about to discover what life is like for millions of people living on the welfare system.

Premiering 8:30pm on Wednesday 17 November, author and TV personality Julie Goodwin, journalist Caleb Bond, and NSW Greens MP Jenny Leong,will goon separate journeys into three different communities to gain insights into the poverty and disadvantage experienced by so many in Australia. For all three, it will be a confronting and emotional experience.

Over three episodes, Julie, Caleb and Jenny will hand over their credit cards and forgo access to life as they know it, challenging their strong pre-existing views to see if they can survive alone on welfare, support a family, and get by with a low-wage job.

Meeting and living with Australians in communities in the inner-city, outer suburbs, and regional Australia, they discover what it’s like to navigate life on various forms of welfare, including in some cases going without necessities like proper heating, secure and safe accommodation, adequate health care and a decent diet. They learn about the challenges first-hand from a single mother raising four children, a woman caring for her ill husband, a young parent living in a rodent-infested house, and a man who lost his job during COVID-19, among many others.

“When I was invited to be a part of Could You Survive on the Breadline? it was an easy decision. I believe very much in the power of storytelling to facilitate important conversations. I fervently believe that in a first-world country like ours, there is enough for everyone to not just survive, but to thrive. Yet somehow, our resources are not being shared equitably and it is the most vulnerable who end up with the least. Those with the least power, the smallest voices, the fewest opportunities to create real change for themselves. I was privileged to take part in a series that not only addresses these issues of inequality and inequity, but also challenges the damaging and pervasive stereotypes that surround people living in poverty.”

“I’m an open-minded sort of person and it’s not often you get a chance to properly embed yourself in other people’s lives, particularly when they’re doing it tough. It was certainly a difficult and eye-opening experience. There are people who are genuinely struggling and can’t seem to get the help they need. It was both confronting and not all that surprising for different reasons. You’d like to think governments spend our taxes wisely on those who need help, but I saw waste and bureaucratic incompetence at every turn. I suppose I came with a set of preconceived notions, some of which were cemented and others that were challenged. I’d like to think the viewers can go on a similar journey. Some of it is not all that surprising, but much of the reality is beyond words.”

“For years I have worked with people living in public housing and communities impacted by poverty, and so participating in this documentary was another way to amplify the challenging experiences people face. Living in substandard housing with little money and a lack of control wasn’t easy, but I knew it was for a limited time. For so many, including those I met, this insecurity and uncertainty is their reality – there is no end in sight. It’s critical that we expose this reality: too often people live in poverty because of choices made by those in power. These choices have real consequences and they do real damage to some of the most vulnerable people in our community. The system is so broken that it can be impossible to survive within it, and it is most certainly impossible to thrive – and that’s heartbreaking, because it doesn’t have to be that way.”

“Could You Survive on the Breadline? provides a raw and honest reflection of what life is like for Australians who rely on the welfare system to survive. It is SBS’s role to invite challenging but vital discussions around problems that affect Australians, and poverty and low-income living are complex issues that often come with a lot of misconception.”

Could You Survive on the Breadline? will also be available to stream on SBS On Demand with subtitles in five languages: Simplified Chinese, Arabic, Vietnamese, Traditional Chinese and Korean, allowing more Australians to engage in these important topics. This new program will be supported by a range of other stories, discussions and programs exploring living on welfare across the SBS network, including on the SBS Guide, SBS Voices, SBS Radio, news and current affairs, on NITV and SBS On Demand.

Could You Survive on the Breadline? is a Lune Media production for SBS. Principal production investment from Screen Australia. Developed and financed with support from Screen NSW.

Could You Survive on the Breadline? airs Wednesdays from 17 November at 8:30pm on SBS and SBS On Demand. The three-part series continues weekly.