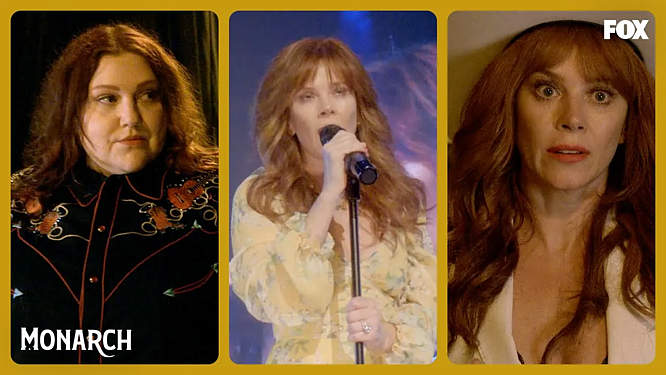 In MONARCH, the Roman family is headed by the insanely talented, but tough-as-nails Queen of Country Music DOTTIE CANTRELL ROMAN (Sarandon) and her beloved husband, “Texas Truthteller” ALBIE ROMAN (Adkins). Dottie and Albie have created a country music dynasty. But even though the Roman name is synonymous with authenticity, the very foundation of their success is a lie. And when their reign as country royalty is put in jeopardy, heir to the crown NICOLETTE “NICKY” ROMAN (Friel) will stop at nothing to protect her family’s legacy, while ensuring her own quest for stardom.

Middle child LUKE ROMAN (Joshua Sasse, “Galavant“) is the CEO of the family’s business, Monarch Entertainment. Luke is the apple of his mother’s eye, but he has a troubled relationship with his father, whose approval he can never get, no matter how hard he tries. Youngest daughter GIGI TUCKER-ROMAN (singer/songwriter Beth Ditto, “On Becoming a God in Central Florida”) is very close to her older brother and sister, but in a family of superstars, Gigi has always felt like a bit of an outcast, in spite of her incredible singing voice. Gigi is married to KAYLA ROMAN-TUCKER (Meagan Holder, “Dave,” “Pitch“), a successful music manager who keeps turning down Luke’s offers to join forces with the family company. Outside business, Kayla’s relationships with the Romans reflect a complicated history, and a secret she is keeping could destroy her marriage to Gigi. ACE GRAYSON (Hollywood newcomer and Filipino recording artist Inigo Pascual) also is part of the family. He is a talented and sensitive 18-year-old who was adopted from an orphanage by Nicky and her husband, struggling British actor CLIVE GRAYSON (guest star Adam Croasdell, “Preacher,” “Reign“). Ace is a phenomenal singer with real swagger on stage, and dreams of being a country star like his Grandpa Albie. And just when the Romans’ world couldn’t get more chaotic, enter CATT PHOENIX (Martha Higareda, “Into The Dark: Culture Shock“), the stunning and unpredictable mother of 17-year-old ANA PHOENIX (Emma Milani, “Solve“), a talented, wide-eyed young singer who is trying to get signed to the Roman family’s record label.

International superstar Shania Twain is a five-time Grammy winner and one of music’s most renowned trailblazers. With five albums released and more than 100 million albums sold worldwide, Twain remains the top-selling female country pop artist of all time. Her hits include “Any Man of Mine,” “That Don’t Impress Me Much,” “You’re Still the One” and “Man! I Feel Like A Woman!.” Twain was the first artist in history to release three consecutive Diamond-certified albums. Twain’s first album in 15 years, NOW, was released in September 2017 and debuted at No. 1 on the Billboard Top 200 albums, making it the first female country release in more than three years to top the all-genre chart. Additionally, the album landed at No. 1 on the Billboard Top Country album charts and went to No. 1 in Canada, Australia and the U.K. The release was followed by a year-long sold-out NOW World Tour. Twain is currently performing at her second residency in Las Vegas, called “Let’s Go!.” The residency at the Zappos Theater in Planet Hollywood Resort & Casino kicked off with a sold-out run and continues through 2022. On July 26, Netflix released “Shania Twain: Not Just a Girl,” a brand-new, career-spanning documentary on Twain’s life and career with an accompanying highlights album. Twain, the Queen of Country Pop, will return with new music this year.

Multiple-Grammy nominee Martina McBride sold more than 23 million albums to date, which includes 20 Top 10 singles and six #1 hits. McBride has earned more than 15 major music awards, including four wins for Female Vocalist of the Year from the Country Music Association, and three wins for Top Female Vocalist from the Academy of Country Music. McBride has been awarded 14 Gold Records, nine Platinum honors, three Double Platinum Records, and two Triple Platinum Awards. McBride was awarded the Covenant House Beacon of Hope Award and Music Business Association’s prestigious 2015 Harry Chapin Memorial Humanitarian Award for her philanthropic efforts on behalf of domestic violence. In 2019, McBride was honored with the x-apple-data-detectors://2 Icon Award at the ACM Honors, for her impactful contributions to country music. She has released two cookbooks – the first, “Around the Table,” a full-color illustrated collection of her favorite recipes, hosting tips, practical menu planning advice and themed décor inspiration, and her second book, “Martina’s Kitchen Mix: My Recipe Playlist for Real Life,” in October 2018. In 2021, McBride unveiled her first exhibit in the Country Music Hall of Fame and Museum. The exhibit, titled “The Power of Her Voice,” was recently extended for an additonal year and will run through August 2023. In July of 2021, McBride released “Martina McBride – Greatest Hits: The RCA Years,” a double-LP vinyl package, with a color variant exclusively at Walmart. This fall, McBride will join Wynonna Judd on “The Judds: The Final Tour.” When McBride isn’t in the studio, she focuses her time on charitable causes dear to her heart through her Team Music Is Love charity initiative. McBride resides in Nashville with her husband, John, and their three daughters.

Grammy, ACM, CMA, AMA and Emmy Award-winning group Little Big Town – consisting of members Karen Fairchild, Phillip Sweet, Kimberly SchlaPMan and Jimi Westbrook – first entered the music scene over 20 years ago with hit songs “Boondocks,” “Bring It On Home,” “Good As Gone” and the Grammy-nominated “Little White Church.” The band’s breakthrough albums Tornado and Pain Killer, produced multiple #1 singles, including “Pontoon,” “Tornado” and “Day Drinking,” as well as the history-making, best-selling country single of 2015, “Girl Crush.” 2017’s The Breaker debuted at #1 on the Billboard Country Charts and Top 10 (No. 4) on the Billboard 200 to critical acclaim. The album features their Grammy-winning, multi-week #1 single, “Better Man,” as well as the 2019 Grammy-nominated “When Someone Stops Loving You.” The band’s self-produced ninth studio album, Nightfall, was released January 2020 and hit the top of the Billboard Country Charts. The record included critically acclaimed and Grammy-nominated “The Daughters,” “Over Drinking” and “Wine, Beer, Whiskey” – the latter of which has reached more than 362 million global streams. In April 2022, they released their new single, “Hell Yeah,” which has amassed more than 30 million global streams to date. Little Big Town has earned more than 45 award show nominations and has taken home nearly 20 awards, including multiple Grammy, AMA, People’s Choice, CMA and ACM Awards, in addition to an Emmy Award. Their highly anticipated 10th studio album, Mr. Sun, will arrive on September 16, 2022.

Edgy. Classic. Country. A defining voice of music and a modern-day legend, two-time 2020 Grammy winner Tanya Tucker continues to inspire artists today. Born in Seminole, TX, Tucker had her first country hit, the classic “Delta Dawn,” at the age of 13 in 1972. Since that auspicious beginning, she has become one of the most admired and influential artists in country music history, amassing 23 Top 40 albums and a stellar string of 56 Top 40 singles, ten of which reached the No. 1 spot on the Billboard Country charts. Tucker’s indelible songs include some of country music’s biggest hits, such as the aforementioned “Delta Dawn,” “Soon,” “Two Sparrows in a Hurricane,” “It’s a Little Too Late,” “Trouble,” “Texas (When I Die),” “If It Don’t Come Easy” and “Strong Enough To Bend.” Tucker is also the recipient of numerous awards, including two CMAs, two ACMs and three CMT Awards. In 2020, Tucker received two Grammy Awards — for Best Country Album: While I’m Livin’; and Best Country Song: “Bring My Flowers Now.” In the fall of 2020, Fantasy Records released Tanya Tucker – Live From The Troubadour on October 16, the one-year anniversary of Tucker’s historic, standing-room only set from which it originates. Tucker was in the midst of resurgent visibility and acclaim, generated by her Brandi Carlile- and Shooter Jennings-produced While I’m Livin’ album, released two months earlier – so the brief stand in front of the West Hollywood tastemaker crowd took on a palpable air of significance. As someone who’s been center stage for more than 50 years, Tucker is donating a portion of the proceeds from the sale of the album directly to The Troubadour. The country icon’s signature tequila, Tanya Tucker’s Cosa Salvaje Tequila, is now available in 14 U.S. states and Canada, with additional stores carrying the spirit every day.