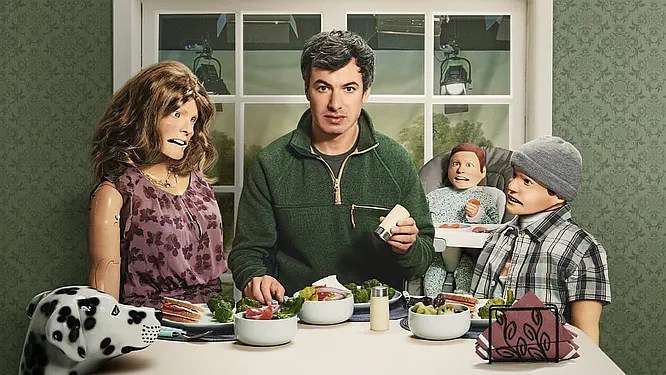 “Clear Eyes, Full Hearts, Can’t lose!” FRIDAY NIGHT LIGHTS comes to Crave on Friday, July 1, giving all of Canada access to this iconic rally chant, and series. In the rural town of Dillon, Texas, winning the state football championship is prized above all else. Coach Eric Taylor (Kyle Chandler) guides a high school football team through pressure-filled seasons while dealing with struggles relating to his own family. The interactions between the team members, current and former players, supporters, coaching staff and regular townsfolk address many of the issues facing small-town America.

Starring Daniel Craig in his fifth and final portrayal of MI6 agent James Bond in the 007 franchise, NO TIME TO DIE is available for streaming on Friday, July 1. James Bond is enjoying a tranquil life in Jamaica after leaving active service. However, his peace is short-lived as his old CIA friend, Felix Leiter, shows up and asks for help. The mission to rescue a kidnapped scientist turns out to be far more treacherous than expected, leading Bond on the trailof a mysterious villain who’s armed with a dangerous new technology. Additional cast includes Léa Seydoux, Rami Malek, Ana de Armas, Jeffrey Wright, Naomie Harris, Ben Wishaw, Lashana Lynch, Ralph Fiennes, and Christoph Waltz. Crave is also home to the 007 Collection which features 25 Bond titles including Spectre, Skyfall, Quantum of Solace, Casino Royale, Goldfinger, From Russia With Love, and more.

Welcome back to the mother-pucking runway! Repping Canada from coast-to-coast-to-coast, and featuring the first-ever competitors from Saskatchewan and Newfoundland and Labrador, the award-winning Crave Original series returns for its nine-episode, third season on Thursday, July 14 at 9 p.m. ET, and is available to Canadian audiences in English and French. Returning to preside over the queens this season are the Queen of the North herself, Brooke Lynn Hytes, who also hosts the Crave Original series 1 QUEEN 5 QUEERS; celebrity stylist and TV personality Brad Goreski; and ETALK senior correspondent Traci Melchor. CANADA’S DRAG RACE follows a weekly release schedule with new episodes streaming Thursdays at 9 p.m. ET.

Nathan Fielder (NATHAN FOR YOU, HOW TO WITH JOHN WILSON) returns to television with a new series that explores the lengths one man will go to reduce the uncertainties of everyday life. With a construction crew, a legion of actors, and seemingly unlimited resources, Fielder allows ordinary people to prepare for life’s biggest moments by “rehearsing” them in carefully crafted simulations of his own design. When a single misstep could shatter your entire world, why leave life to chance? The six-episode comedy series premieres Friday, July 15 at 11 p.m. ET, with subsequent episodes dropping Fridays.

The sizzling summer series, based on the international smash hit and cultural phenomenon, returns for Season 4 on Tuesday, July 19 at 9 p.m. ET. The matchmaking begins as a group of single “Islanders” come together in a stunning villa, ready to embark on a summer of dating, romance, and ultimately, relationships. Every few days the Islanders pair up and those who are not coupled are at risk of being dumped from the island. In addition to choosing their partners wisely, Islanders must also win the hearts of viewers who have the opportunity to shape events on screen, and ultimately crown one lucky couple the winner who will then have the chance to walk away with both love, and the cash prize. New episodes of LOVE ISLAND USA drop every Tuesday-Friday, and Sunday at 9 p.m. ET on Crave, CTV.ca, and the CTV app.

Twenty years ago, a series of tragic events almost ripped the blue-collar town of Millwood apart. Now, in the present day, a group of disparate teen girls find themselves tormented by an unknown Assailant, and made to pay for the secret sin their parents committed two decades ago…as well as their own. PRETTY LITTLE LIARS: ORIGINAL SIN takes audiences milesaway from Rosewood, featured in the original series, to a brand new town, with a new generation of “Little Liars.” The first three episodes of the series drop Thursday, July 28, with subsequent episodes streaming Thursdays.

Winner of eight Canadian Screen Awards including Best Motion Picture, and an official selection of the 2021 Toronto International Film Festival, the critically acclaimed Canadian film SCARBOROUGH streams Friday, July 1 on Crave. Adapted from the critically acclaimed novel by Catherine Hernandez, SCARBOROUGH is an unflinching portrait of three, low-income families struggling to endure within a system that has set them up for failure. It shows the love and perseverance communities can foster, lifting up families to overcome the obstacles placed in their way.

Fresh off its premiere at the Tribeca Film Festival on June 19, all three-parts of SHOWTIME’s new docuseries SUPREME TEAM stream Friday, July 8. Directed by Grammy® winner Nasir “Nas” Jones and Peter J Scalettar, and in collaboration with Mass Appeal as part of the network’s HIP HIP 50 banner, the documentary chronicles the Supreme Team, the notorious Queens, New York crime syndicate, and tells the real story directly from its two leaders, Kenneth “Supreme” McGriff and Gerald “Prince” Miller. Through the voices of these two infamous entrepreneurs and the syndicate’s members, as well Hip Hop legend LL Cool J, New York City Mayor Eric Adams, journalist Joy Reid, singer Ashanti, producer Irv Gotti, and others in the local community, politics, law enforcement, academia and popular culture, viewers are given access beyond the headlines to examine the broader cultural dynamics and the impact that this small group from South Jamaica Queens has held on hip hop and society at large.

In 2015, Jeff Berwick, a Canadian entrepreneur turned provocateur, launched a conference in Acapulco, Mexico in hopes of promoting anarchy in its purest form – an ideal espousing the absence of government with absolute individual self-rule. The event, called “Anarchapulco,” draws an international array of libertarians, fugitives, and families seeking to “unschool” their children to protect them from the bureaucracies of modern life, as well as crypto-currency evangelists and others attracted to the idea of creating a stateless community, free from governments and central banking systems. Unfolding over six years, THE ANARCHISTS chronicles a strange and deadly series of events, where utopian ideology collides with the unpredictability of human nature. The six-part docuseries begins streaming on Sunday, July 10 at 10 p.m. ET, and follows a weekly release schedule with new episodes dropping Sundays at 10 p.m. ET.

Season 2 of the Max Original reality dating series FBOY ISLAND, hosted by comedian and actress Nikki Glaser, debuts Thursday, July 14 with the first three episodes. Filmed earlier this year in Cabo San Lucas, Season 2 of FBOY ISLAND follows three new women, Mia Emani Jones, Louise Barnard, and Tamaris Sepulveda, who move to the tropical paradise, and are joined by 26 men – 13 self-proclaimed “Nice Guys” looking for love, and 13 self-proclaimed “FBoys,” there to compete for cold, hard cash. The women navigate the dating pool together with the hope of finding a lasting love connection. By the finale, all will be revealed: who is a Nice Guy, who is an FBoy, who the women ultimately choose, and who walks away with the prize money. The eight-episode season continues with three new episodes streaming July 21, leading up to the finale on July 28.

The third season of SHOWTIME’s acclaimed Boston drama series CITY ON A HILL starring Kevin Bacon and Aldis Hodge, premieres Friday, July 29. This season brings viewers to Boston’s high society Beacon Hill. Having left the FBI and thrown his badge into Boston Harbour, Jackie Rohr (Bacon) lands a lavish new gig running security for a wealthy family. Life is good until secrets begin to unravel. When an investigation opens, ADA Decourcy Ward (Hodge) sees an opportunity to finally rip out the machinery perpetuating a broken criminal justice system. Siobhan Quays (Lauren E. Banks, In Reality), representing a construction worker who was severely injured on the Big Dig, encounters the city’s corruption first-hand, all while coping with the traumatic events of her past year. CITY ON A HILL follows a weekly release schedule with new episodes streaming Sundays.