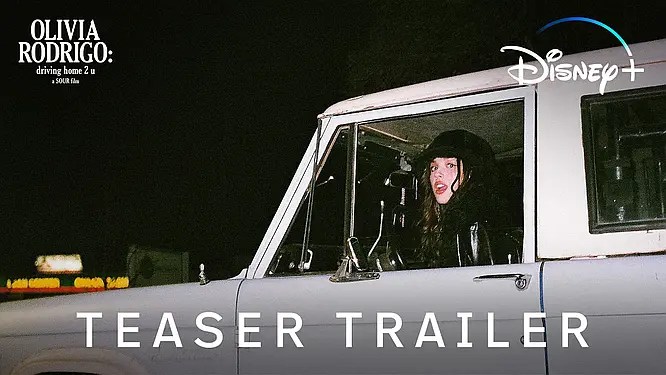 For the first time, Olivia takes audiences on a familiar road trip from Salt Lake City, where she began writing her triple-platinum Geffen Records debut album “SOUR,” to Los Angeles. Along the way, Rodrigo recounts the memories of writing and creating her record-breaking debut album and shares her feelings as a young woman navigating a specific time in her life. Through new live arrangements of her songs, intimate interviews, and never-before-seen footage from the making of the album, audiences will follow her along on a cinematic journey exploring the story of “SOUR.”

“This is a unique film experience where for the first-time fans will understand how her album came to be and why it was such a personal journey for Olivia,” said Ayo Davis, president, Disney Branded Television. “This is not a concert film per say, but really, an opportunity to experience first-hand how Olivia Rodrigo became one of the biggest music stars of the day – and a chance to see her perform the songs from SOUR like never before.”

“‘driving home 2 u’ is such a unique and fresh approach to a music film, and that’s just what we’ve come to expect from Olivia,” said John Janick, chairman of Interscope Geffen A&M and Interscope Films. “It’s an authentic look into her creative process, her incredible drive, and who she is as an artist and person. We’re so proud to have co-produced this film with Supper Club and are thrilled that it has found a home on Disney +.”

“OLIVIA RODRIGO: driving home 2 u” is a Disney+ original film from Disney Branded Television, directed by Stacey Lee and produced by Interscope Films and Supper Club.

With the arrival of her record-breaking, quadruple-platinum debut single “drivers license,” critically-acclaimed singer-songwriter Olivia Rodrigo revealed the tremendous power of her raw self-expression – and ultimately cemented her status as the most promising young artist to emerge with the release of her first full-length album, SOUR – out now on Geffen Records.

Named the #1 Album of 2021 by Rolling Stone and called one of the Best Albums of 2021 by the New York Times, SOUR landed at the top of several Billboard year-end lists including the top Global 200 Artist, top Overall New Artist, top Hot 100 Artist, top Hot 100 Female Artist, and top Hot 100 Songwriter. Capping off Rodrigo’s banner year, Rodrigo won “New Artist of the Year” at the 2021 American Music Awards and earned seven nominations for the 2022 Grammy(R) Awards, making her the second-youngest artist in Grammy(R) history to score nods in each of the Big Four categories in the same year.  Now RIAA Double Platinum Certified, upon its release, Rodrigo’s LP SOUR debuted at No. 1 on the Billboard 200. Upon its release, SOUR scored the most U.S. audio streams from a female debut album ever and broke the record for the most-streamed album in a week by a female artist in Spotify history with over 385M global steams. The album produced two #1 songs “drivers license” (4x Platinum) and “good 4 u” (3x Platinum), the top 5 song “deja vu” (2x Platinum). All 11 tracks from the album have landed in the top 30 of Billboard’s Hot 100, making Rodrigo the first female artist, and the fourth act overall, to simultaneously chart 11 or more songs in the top 30.

All throughout SOUR, Rodrigo displays her incredible talent for capturing complex emotions in high-impact pop songs. Entirely co-written by Rodrigo, the album embodies a minimalist but mesmerizing form of alt-pop, each song centered on her beautifully detailed storytelling and unforgettably original narrative voice. SOUR is a collection of songs fully reflecting her undeniable boldness and songwriting prowess.