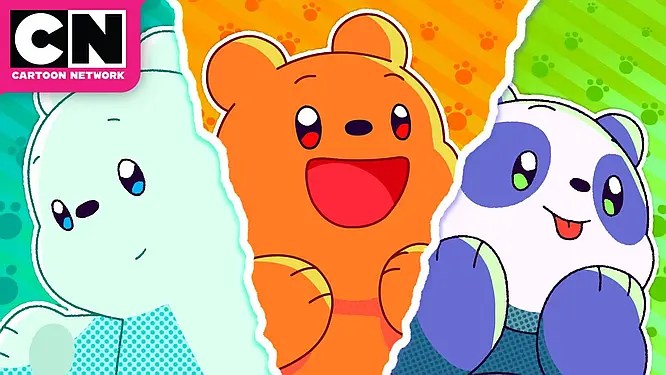 Travel up, up, and away to faraway places with the 10-episode premiere of the original animated comedy, We Baby Bears, Saturday, January 1  @ 10:00AM – 12:30PM ET/PT on Cartoon Network followed by two new episodes that will premiere every Saturday throughout the month starting January 8  @ 9:00AM ET/PT. Produced by Cartoon Network Studios, We Baby Bears embarks on magical adventures with the beloved siblings in search of a place they can call home. The series will also roll out globally on Cartoon Network starting with Latin America (LATAM) on January 2, Asia Pacific (APAC) beginning January 8, and across Europe, the Middle East, and Africa (EMEA) from March 2022.

“We Baby Bears is the first original Cartoon Network series to kick off our Redraw Your World campaign and there isn’t a better, more authentic representation of our new brand promise than these baby bears looking for the place they fit in,” said Amy Friedman, Head of Kids & Family Programming, Warner Bros. “Partnering with TRI.BE on the original theme song, their message, ‘We are perfect as we are,’ doubles down on themes of inclusivity and acceptance which we think kids everywhere will be drawn to.”

The original theme song for the series is performed by up-and-coming Universal Music Korea K-Pop supergroup, TRI.BE. Their first-ever, highly anticipated mini-album, “Veni Vidi Vici” was recently released in October and they have been steadily growing their fanbase worldwide. Quadrilingual, the group is the first of its kind speaking and singing in Chinese, English, Japanese and Korean.

A spin-off of the hit Cartoon Network series, We Bare Bears, We Baby Bears follows Grizz (Connor Andrade), Panda (Amari McCoy), and Ice Bear (Max Mitchell) – as their younger baby selves – traveling in a magical box to fantastic new worlds searching for a place to call home. Along the way, they meet new friends, learn a few lessons, and discover that “home” can mean wherever they are, as long as they’re together. We Baby Bears is executive produced by Daniel Chong and Manny Hernandez.

“The Magical Box” – Three baby bear brothers are granted a magical box that can transport them to any place in the universe.

“Bears and the Beanstalk” – The Bears work as short-order cooks in a giant’s diner.

“Boo-Dunnit” – While visiting a mansion haunted by ghosts, the Bears must play detective to find out which one of them stole their box.

“The Little Mer-Bear” – In order to live under the sea, the Bears must transform into mermaids.

“Modern-ish Stone Age Family” – The Bears are invited to live with a family of cavemen, but things get rocky when the Bears teach the family about television.

“Excalibear” – The Bears visit a medieval vegetable village and Grizz is convinced he’s the rightful king.

“Meat House” – The Bears and their new friend, Squatter Otter, take up residence in a mysterious house made of meat.

“The Pirate Parrot Polly” – The Bears team up with Polly the Parrot Pirate on a quest for hidden treasure.

hen, be sure to tune in for two new episodes every Saturday @ 9:00 a.m. ET/PT throughout the month, beginning January 8:

“Hashtag Number One Fan” – Panda gets kidnapped by a pair of deranged French foxes.

“Snow Place Like Home” – When the Bears realize whatever they build with snow comes to life they decide to build the biggest snow party of all time.

“Fiesta Day” – The Bears party it up with living piñatas for Fiesta Day. Wanting the festivities to never end, Grizz wishes for it to be Fiesta Day every day.

“Baby Yaga House” – Squatter Otter tries to win Panda’s trust and convince the Bears to live in a mysterious house.

“Bears in the Dark” – The Bears search for their missing box in a dark and scary cave.

“Big Trouble Little Babies” – When they realize they’re too small for the rides at an amusement park, the Bears use a magic potion to get bigger.

“Triple T Tigers” – When the Bears meet three cool tiger brothers, Grizz wants to be just like the oldest, TK, but he may not be the best role model.