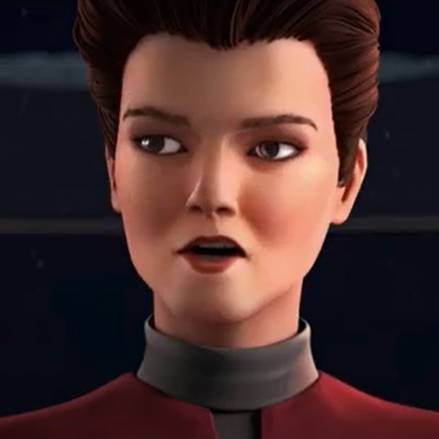 A new galactic adventure is about to begin for an all-new generation….but an icon in the Star Trek universe is returning.

Paramount+ has released an extended first look at Hologram Kathryn Janeway, from the upcoming all-new animated kids series Star Trek: Prodigy, which will stream exclusively in Australia on October 29. The new clip featuring the return of the iconic Star Trek character of Janeway, voiced by Kate Mulgrew in the new series, was released during the cast and producer panel at New York Comic Con.

In addition, it was revealed that Daveed Diggs, Jameela Jamil, Jason Alexander and Robert Beltran have joined the season one voice cast with recurring roles. Diggs will voice Commander Tysess, Jamil will voice Ensign Asencia, Alexander will voice Doctor Noum and Beltran will reprise his Star Trek: Voyager role as Captain Chakotay.

In the one-hour Star Trek: Prodigy series premiere titled Lost & Found, a group of lawless teens, exiled on a mining colony outside Federation space, discover a derelict Starfleet ship. Dal must gather an unlikely crew for their newfound ship if they are going to escape Tars Lamora, but the Diviner and his daughter Gwyn have other plans.

Developed by Emmy® Award winners Kevin and Dan Hageman (Trollhunters and Ninjago), the CG-animated series Star Trek: Prodigy is the first Star Trek series aimed at younger audiences, and will follow a motley crew of young aliens who must figure out how to work together while navigating a greater galaxy, in search of a better future. These six young outcasts know nothing about the ship they have commandeered – a first in the history of the Star Trek franchise – but over the course of their adventures together, they will each be introduced to Starfleet and the ideals it represents.

See below for an extended first look at Hologram Janeway in Star Trek: Prodigy, streaming exclusively On Paramount+ from October 29.

Star Trek: Prodigy joins a host animated kids and family content including The Smurfs, Kamp Koral: SpongeBob’s Under Years and Rugrats, plus some of the world’s best dramas including American Rust, Dexter: New Blood, Why Women Kill and Yellowjackets.