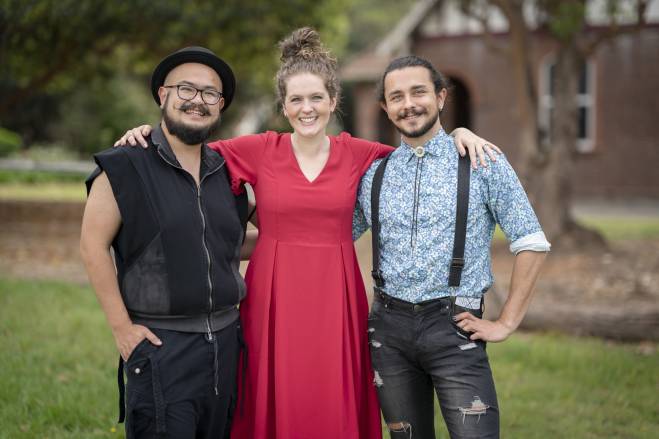 Twelve dedicated home bakers have been whittled down to just three, with only one challenge standing between them and victory.

After nine weeks of kneading, dicing, and frosting in the Bake Off Shed, The Great Australian Bake Off unveiled the final three bakers in Tuesday night’s show.

The top three finalists, Aaron Hawton, Ella Rossanis, and Nurman Noor, will compete in the grand finale on FOXTEL next Thursday, March 31 at 8.30pm.

Aaron Hawton (31) An English/Drama teacher and rugby player for the Melbourne Chargers, Melbourne’s gay and inclusive rugby team, Aaron fell in love with baking as a boy while spending time with his nan in the kitchen. Aaron really took up baking as a teenager and is described as a baking all-rounder.

Ella Rossanis (36) Perth born, and Sydney based, Ella is a creative copywriter and mum of three. Ella is used to cooking under time pressure and tries to make all of her bakes spectacular and creative to the core. In the Shed, Ella has been known for illusion baking inspired by her children.

Nurman Noor (35) A GP, born in Indonesia and now calls Tasmania home, Nurman started baking at age eight and rediscovered his love of baking during his first year of medical school. Nurman sees baking as his creative outlet and is never without his trademark hat – you know things are getting serious when he takes it off.

The Great Australian Bake Off commenced nine weeks ago with 12 passionate home bakers stepping into the iconic Bake Off Shed, hoping they had the baking brilliance to go all the way. Each week, judges Maggie Beer and Matt Moran and hosts Claire Hooper and Mel Buttle farewelled one baker until just three were left.

“I have loved seeing them grow and blossom as bakers and I am so thrilled with our final three.”

“Out of all the finals we have done, it is so even, and we have three fantastic bakers, all have won star baker twice, but only one of them can win and it is a very even keel.”

Having tackled French, bread, biscuit and cake weeks to name a few and having survived Matt and Maggie’s technical challenges every week, Aaron, Ella and Nurman will have to pull out all their baking skills to take it to the next level with their three final bakes in next week’s grand finale.

The Great Australian Bake Off is a BBC Studios production in Australia for FOXTEL based on a format created by Love Productions and licensed by BBC Studios distribution.

The Great Australian Bake Off grand finale, Thursday March 31 at 8.30pm on LifeStyle.