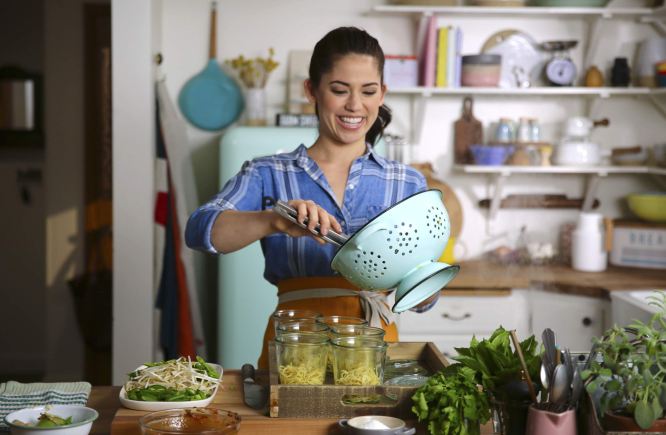 Molly Yeh and her husband Nick Hagen are in the middle of renovating their Midwestern farmhouse and need a break from the non-stop construction, so they head to Waco to explore the city’s Southern hospitality, home design ideas, and food spots. After checking out vintage clothing, mind-blowing barbecue, a mouthwatering fried chicken sandwich, and, of course, Chip and Joanna’s Magnolia Market at the Silos, Molly and Nick meet with Fixer Upper craftsman Clint Harp to create a custom pegboard, inspired by her culinary icon Julia Child, that will be the centerpiece of their new kitchen. The special culminates with Molly visiting Joanna at the Gristmill, the renovated flour mill where Joanna shoots Magnolia Table with Joanna Gaines, and over Molly’s homemade cookies they bond over their love of food and home design. Molly, whose series Girl Meets Farm reached almost six million viewers in its most recent season, and Nick’s creative journey Molly Yeh’s Magnolia Adventure premieres Sunday, October 24th @ 11AM ET/PT on Food Network and streams the same day on discovery+.

“We knew bringing together two beloved and popular experts like Molly and Joanna, each with her own loyal following, would be an exciting offering for their collective fanbase,” said Courtney White, President, Food Network and Streaming Food Content, Discovery Inc. “Viewers are sure to be inspired by this special, be it for their next home renovation project or homemade meal.”

Molly Yeh is the star of Food Network series Girl Meets Farm, which celebrates the very best of Molly’s food, with recipes inspired by her Jewish and Chinese heritage and a taste of the Midwest. In 2019, Molly was nominated for both a James Beard Foundation Media Award for “Outstanding Personality/Host” and a daytime Emmy Award for “Outstanding Culinary Host.” Molly rose to national prominence with the debut of her memoir, Molly on The Range: Recipes and Stories from an Unlikely Life on a Farm. She is also the creator of the critically acclaimed and highly popular food and lifestyle brand mynameisyeh, which has been recognized by Saveur and Yahoo as “Food Blog of the Year.” Outside the kitchen, Molly is a Juilliard-trained percussionist and has performed with orchestras around the world. She lives on a sugar beet farm on the North Dakota-Minnesota border with her fifth-generation farmer husband, Nick, their two-year-old daughter, Bernie.

On social, follow #MollysMagnoliaAdventure to go behind the scenes with Molly and Nick as they see the sights in Waco, Texas, get some home design inspiration, and drop in for a visit with Joanna Gaines!