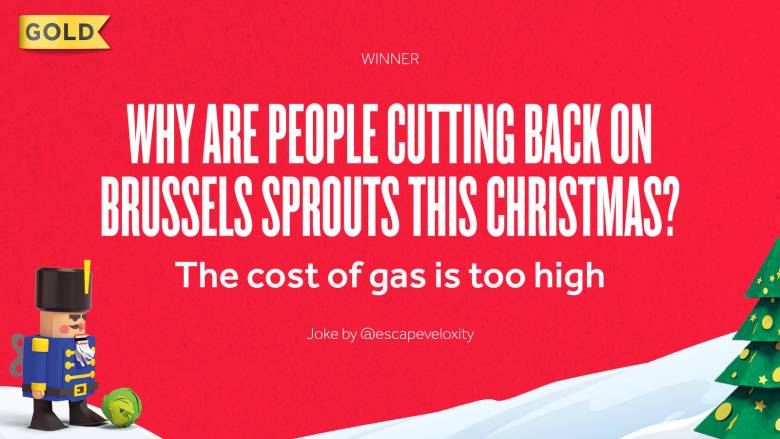 A festive joke about the rising cost of fuel has been revealed as the winner of Gold’s annual competition to create the best topical Christmas cracker gags, according to the British public.

Other topical stories from the past 12 months have been used as material for the top festive funnies, including Covid vaccines and testing, the Friends reunion, the lack of HGV drivers and popular Netflix series Squid Game.

The winning jokes are revealed by UKTV channel Gold’s annual festive competition for new Christmas cracker jokes which aims to keep the country chuckling this festive period, adding a comical spin to a year like no other.
Now in its ninth year, the competition once again challenged entrants to come up with the best topical and modern Christmas cracker jokes, which were then voted for by the British public to determine the winners.

Gold challenged the British public to tweet original festive gags to enter the competition. Entries were shortlisted by a panel of judges – led by comedy critic Bruce Dessau – and put to an anonymous public vote of 2,000 British adults to reveal the winning jokes. The top six jokes were included within bespoke boxes of Gold’s Christmas crackers*, which were presented to this year’s winners.

The annual joke competition celebrates Gold’s seasonal TV scheduling, which includes classic festive episodes of Britain’s best loved comedies such as Only Fools and Horses, The Royle Family and Mrs Brown’s Boys. There’s also a chance for Gold viewers to catch up on UKTV Originals including The Cockfields Christmas Special which airs on Gold from 13th December.

The British public’s fantastic sense of humour never ceases to amaze me! With subjects spanning from Matt Hancock to Squid Game, Covid to Track and Trace, Jackie Weaver to Emma Raducanu’s smashing wins, there is something to get everyone giggling this year.

It is heartening that every Christmas, the British public can reflect on this year in a humorous way. We hope that, alongside Gold’s comedy Christmas programming, our modern Christmas cracker jokes add a little laughter for everyone at the end of the year.

The author of the winning joke, Craig Rogers from Manchester, received the top prize of £1,500 towards a holiday, a festive hamper and a box of bespoke Gold Christmas Crackers, one of which will contain his own winning gag.

All the jokes voted on by the British public are original content to the best of Gold’s knowledge.