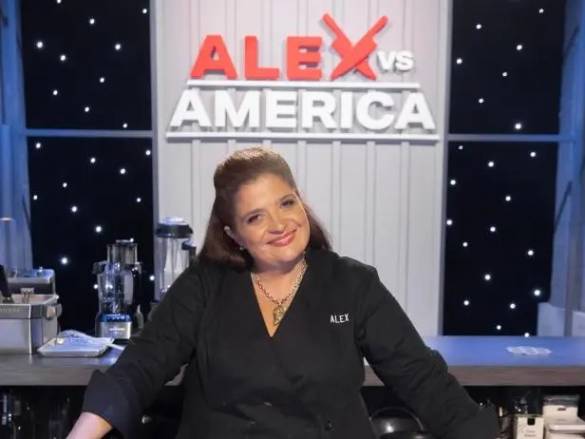 Alex Guarnaschelli is one of the most accomplished and revered chefs in the culinary arena, having won virtually every battle she has ever competed in. Now, over the course of five weeks, 15 brave chefs from across the United States take their best shot at beating Alex for the ultimate culinary triumph in the new competition series, Alex vs America, premiering Sunday, January 2nd @ 10PM ET/PT on Food Network. Hosted by the acclaimed chef Eric Adjepong, each episode features three culinary superstars competing over two rounds against one another as well as against Alex.

These competitors might hail from different states, but they all share the same mastery of a specific ingredient or dish, one that they have spent endless hours in their own kitchens perfecting and which will now be tested in an effort to take down one of the country’s most formidable chefs.

At the start of each battle, Alex and the competitors learn what the challenge will be, with the chefs having the ability to work together in selecting variables for their dishes as well as the amount of time they give themselves and Alex to cook with. Each finished plate will undergo a blind tasting, with only the top three chefs advancing and the least successful from the challenge being immediately sent home, even if it is Alex. In the end, it all comes down to what’s on the plate. Will the final two chefs outcook and outshine Alex, earning bragging rights over an award-winning Iron Chef? Or will Alex’s legendary winning streak continue, sending all the ambitious competitors home with nothing but their disappointment? Fans can also stream Alex vs America on discovery+ with new episodes available weekly, starting with an early look at the premiere on Saturday, December 25th.

Added Guarnaschelli, “Truth is, I have loved competitive cooking for as long as I can remember, first watching, then judging and competing myself. Now, I finally have the opportunity to invite other adrenaline-junkies to join me in doing what we love, cooking our butts off, and Alex vs America is literally my dream come true. That said, what I have learned the hard way is, while I love winning, I hate losing more.”

“As a trusted culinary voice on The Kitchen to her no-holds-barred judging on Chopped, or seamlessly shifting into hosting competitors on Supermarket Stakeout, there truly isn’t anything that Alex Guarnaschelli cannot do,” said Courtney White, President, Food Network and Streaming Food Content, Discovery Inc. “On Alex vs America, she has a bullseye on her back, as these talented chefs set their gazes on defeating Alex. Sounds easy enough but these competitors will quickly learn why Alex is one of the most respected chefs with an innate ability to conquer any obstacle in her way. Viewers are in for a fast-paced and action-packed competition.”

In the premiere episode, three shellfish experts challenge Alex in two intense rounds of cooking. Hailing from Hawaii, Louisiana, and Maine, these chefs are betting their skills with shellfish can give them a chance at beating Chef Alex. In round one, the chefs seal their fate by choosing the variables they and Alex will cook with. The chefs advance to the second round only if they can defeat Alex. In another episode, Alex goes head-to-head against three chocolatiers to create sweet and decadent desserts. And it gets hot in the arena when Eric Adjepong welcomes three spice experts to attempt to take on Alex. Their strategy picking ingredients could help them succeed, but will it be enough to wow the judges with their unique take on spice and go home with the win?

Get an exclusive, behind-the-scenes look at how Alex prepared for the competition at FoodNetwork.com/AlexVsAmerica. Plus, follow along with the cooking battles on social media, check out exclusive content with the judges, and get a tour of the set using #AlexVsAmerica.

Alex vs America is produced by Lando Entertainment.