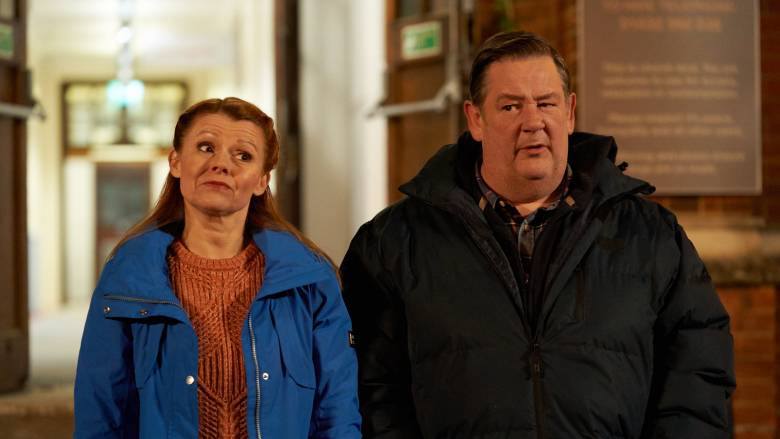 Gold is bringing back its hit UKTV Original comedy murder mystery Murder They Hope (3×60″) for a second series led by Johnny Vegas and Sian Gibson, reprising their roles as Terry and Gemma.

Produced by Shiny Button, the Agatha Christie-inspired whodunnits, written by Jason Cook, have been a huge hit for Gold in recent years, with Cook’s first outing Murder on the Blackpool Express attracting 1.8 million viewers during its first week. The success has continued ever since with Death on the Tyne, Dial M for Middlesbrough and last year the first series of Murder, They Hope with episodic guest stars Paul Whitehouse (The Fast Show), Hannah Waddingham (Ted Lasso), Layton Williams (Bad Education) and Kiell Smith-Bynoe (Ghosts).

Following the explosion of their coach business in the Drapers Tours trilogy, Terry (Johnny Vegas) and Gemma (Sian Gibson) set out on a new adventure as fully-fledged private detectives in Murder, They Hope). They found themselves in the midldle of a poisonous pastry scandal, at the mercy of a murderous Bunnyman and chasing down a coach driving serial killer all while moving in with Gemma’s sister Monica (Sarah Hadland) and trying to save for their much anticipated wedding. Series two picks up where we left off and promises church bells, couples therapy, aristrocratic mystery and a framing like no other.

Murder, They Hope is commissioned for UKTV by Pete Thornton, head of scripted, and ordered by Gerald Casey, channel director for Gold. Steve North is genre general manager for comedy and entertainment and Richard Watsham is director of commissioning. The series is written by Jason Cook (Hebburn, Dial M for Middlesbrough, Murder on the Blackpool Express) and will be directed by Ed Bye and Sarmad Masud, series producer is Andy Harvey and executive producers for Shiny Button are Mollie Freedman Berthoud and Andy Brereton.

It feels like a rare thing to have a comedy that lasts for more than a few years nowadays on British TV, so to be back in business with the brilliant team behind Murder, They Hope when they first smashed records on Gold with the franchise way back in 2017 feels pretty special. To be welcoming back Sian and Johnny and to have a series in such rude health creatively feels even more remarkable. Hats off to all involved – we can’t wait to see whodunnit next.

Jason Cook’s brilliantly hilarious murder mysteries have become a true mainstay of the Gold channel. I can’t wait to see Sian and Johnny back together as TV’s funniest crime-solving duo.

It’s such a joy to be able to take Terry and Gemma on another series of journeys into the word we have created for them. The reaction from the public has been incredibly heartwarming and I’m so happy that UKTV are allowing us to keep telling their stories.

Murder, They Hope will air on Gold later this year and follows recent scripted comedies Newark, Newark and The Cockfields.