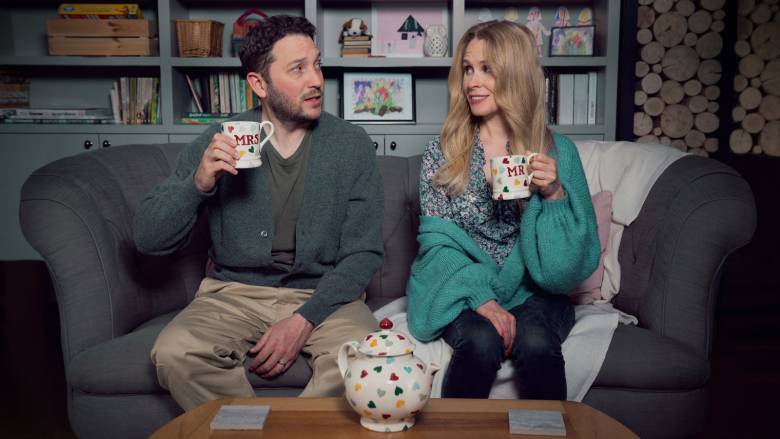 UKTV today announces that it has commissioned two new series of award-winning sitcom Meet the Richardsons (20×40′). Married comedians Jon Richardson and Lucy Beaumont will return to give viewers a peek into their madcap daily lives. The comedy series, previously created by Lee Hupfield at Second Act, will now be produced by Manchester-based King of Sunshine Productions with Lee Hupfield and Eddie Stafford remaining at the helm to produce and direct the series. The series is written by Lucy Beaumont (Hullraisers) and Tim Reid (Car Share).

UKTV oh my gosh I can’t quite believe we are going to do more series of a show that has made Johnny Vegas become my stepdad, Jon lose a hamster, my mum scrap with Beverley Callard and David Tennant walk off set. Who knows where series four will take us? (I won’t be sat daytime drinking with Leeds fans as Jon would like).

The pedant in me would like to point out that by the time you get to series four, you aren’t really “meeting” the Richardsons anymore, so much as being stuck in a relationship with them whether you like it or not. The optimist in me obviously wants to say how thrilled he is and how much he hopes people enjoy the new episodes, but I don’t have an optimist in me, so perhaps it’s best I keep my mouth shut. Thank you Dave, and thank you to Lucy and Tim for continuing to generate ideas which see me humiliated in front of my idols.

Meet the Richardsons at Christmas won the Best Comedy gong at the Broadcast Digital Awards last Autumn ahead of series three’s return to Dave this February. The third series triumphantly ranked Dave as the #1 non-terrestrial channel in the time slot for its premiere episode which was watched by 792k. To date the third series of Meet the Richardsons has reached 2.5m individuals since its premiere in March*.

Meet the Richardsons is commissioned for UKTV by Iain Coyle, head of comedy entertainment, and ordered by Cherie Cunningham, Dave channel director. Richard Watsham is director of commissioning for UKTV and Steve North is genre general manager, comedy and entertainment. Lee Hupfield and Eddie Stafford continue as producer/directors for the series and executive producers for King of Sunshine Productions are Sohail Shah and Paul Sandler.

I’m delighted that we’ve got a whole truck full of Meet the Richardsons coming down the line. This show just gets better and better every series.

Spending time with Jon and Lucy in Meet the Richardsons is the pick me up we all need. This irreverent and relatable comedy manages to consistently find the funny in married life – we can’t wait to see what more they have in store for us.

We’re really excited to be working with Jon, Lucy, UKTV, Lee and the entire fabulously talented team behind Meet the Richardsons. Making a two series order will be a lot of fun for us and, no doubt, a lot of stress for Jon!

Manchester-based King of Sunshine Productions recently welcomed Lee Hupfield as a Creative Executive, bringing his own unique world-view and talent to work with Sohail and the team.

The return of Meet the Richardsons sees a host of returning UKTV Original series on Dave this year including Hypothetical, BAFTA-nominated Big Zuu’s Big Eats and Question Team.

Catch up on Meet the Richardsons series 1-3 on UKTV Play. Series three’s holiday special episodes will air this summer on Dave. Series 4 will air on Dave in 2023.