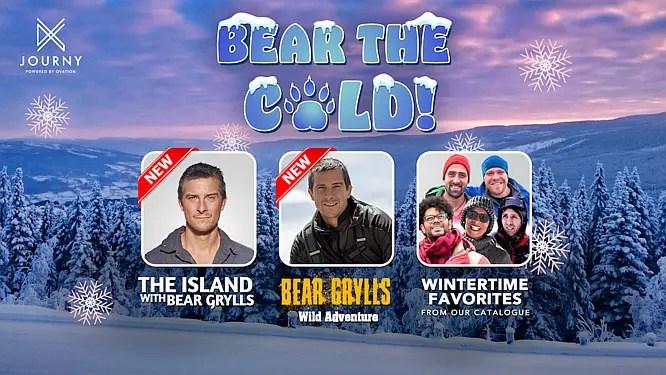 Ovation TV, America’s premier arts network, is pleased to announce the latest programming for its award-winning travel-entertainment digital channel, JOURNY. JOURNY premieres a new travel series every month, supported by a curated lineup of diverse programming, talent, and destinations. Starting on December 1 and streaming through the month of December, JOURNY premieres two series: The Island with Bear Grylls and Bear Grylls Wild Adventure. The network has also curated 37 of its best winter & holiday season episodes from its favorite series and docs like Travel Man, Rock the Park, Xploration Awesome Planet, David Rocco’s Dolce Vita, Andiamo Uptown, Descending, Departure, and Joanna Lumley in the Land of the Northern Lights.

In The Island with Bear Grylls, adventurer Bear Grylls abandons 13 British men & women on a remote, uninhabited Pacific island. In danger of being overwhelmed by the tides, they battle through the elements, as the enormity of the task ahead quickly dawns on them. Bear Grylls Wild Adventure finds Grylls hosting former rugby union player Jonny Wilkinson and former boxer Nicola Adams as they face the grueling and harsh terrain of Dartmoor National Park in the UK as they test of their survival instincts in a once-in-a-lifetime experience.

Viewers will also enjoy the specially curated winter-themed lineup of the following titles:

Joanna Lumley in the Land of the Northern Lights: An amazing journey in Norway’s Far North as Joanna Lumley (Absolutely Fabulous, The New Avengers) pursues a life-long dream to track down the elusive, stunningly beautiful Northern Lights – ‘the true wonder of the world’ as she puts it. As she seeks this personal Holy Grail, viewers get to see new sides of the charming, indefatigable, and idiosyncratic Joanna Lumley, responding with humor and deep emotion to one of the world’s most magnificent but extreme environments.

Rock the Park: Hosts Jack Steward and Colton Smith are on a mission to explore every national park in this country and in the process go off the beaten path coming face to face with nature and some of the most awe-inspiring places on earth. This December, discover some of our dynamic duo’s amazing adventures in beautiful mountainous, snowy, and cold climates!

Travel Man: Richard Ayoade attempts to visit all the top tourist attractions in various cities in a 48-hour period. Richard hates long, boring holidays so he challenges himself to make trips as efficient as possible. He devises a plan to ensure that he makes every stop on his site-seeing journey.

Xploration Awesome Planet: Philippe Cousteau Jr. is no stranger to exploration. The grandson of legendary underwater explorer Jacques Cousteau, Philippe hosts and serves as executive producer of this half-hour earth science series that examines the planet.

David Rocco’s Dolce Vita: David and Nina Rocco celebrate Christmas with family and friends at their Tuscan farmhouse and prepare a meal that includes stuffed and fried squid and spaghetti with braised octopus.

Andiamo Uptown: A vibrant travel series hosted by Donna Perkins that combines luxury and adventure with a vicarious approach to traveling.

Descending: Hosts Scott Wilson and Ellis Emmett descend beneath the surface to explore the three-quarters of the planet that is covered in water.

Departures: Scott Wilson and Justin Lukach leave their lives behind in search of unique experiences through some of the most beautiful and remote places on earth. From epic landscapes and unforgettable culture, to the often trying times that come with international travel, the series chronicles the unforgettable friendships, personal successes, and sometimes crushing disappointments that befall them on their journey.