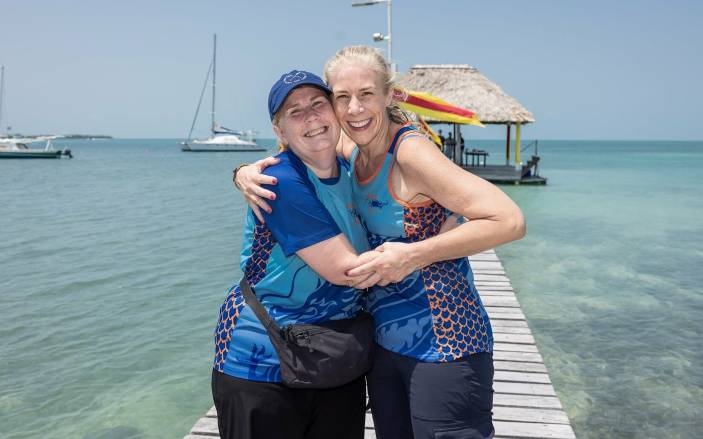 Last Night on The Amazing Race Australia; Teams competed in a foot race for one of two boats leaving for Caye Caulker 15 minutes apart. Teams had to feed the local fish in this challenge, but these weren’t your standard Gold Fish; these whoppers could weigh up to 160 kg. Fortunately (for some), boat one was able to complete feeding before boat two even arrived.

It was time to get up close and personal with the locals because the sharks were starting to experience FOMO. One person from each team participated in this Roadblock, snorkelling and holding their breath in shark- and string ray-infested waters in order to retrieve a marked conch shell.

Angel panicked, causing Kelly and Georgia to sprint to the front, costing them the time advantage they had gained from being on the first boat.

Next was a Detour between twirling tresses and twerking tooshies.

Tiffany and Cynthia successfully completed the challenge while Kelly and Georgia struggled to complete the eight cornrow braids.

Pako and Mori, meanwhile, danced through the traditional booty shaking moves without any hesitation.

Pako and Mori and Heath and Toni were successful in maintaining their lead in the following Roadblock, which involved slow-motion bike riding while transporting coconuts, and this resulted in a two-horse race to the finish line.

Jodie and Claire struggled on the bike ride, but Lauren and Steph’s return from isolation and their requirement to complete a Speed Bump provided a lifeline.

To get to the Pit Stop, there was another footrace battle. Pako and Mori were defeated by Heath and Toni for first place, and Lauren and Steph simply outperformed Jodie and Claire in the battle to stay in the race, keeping them around for another leg while Jodie and Claire were eliminated.