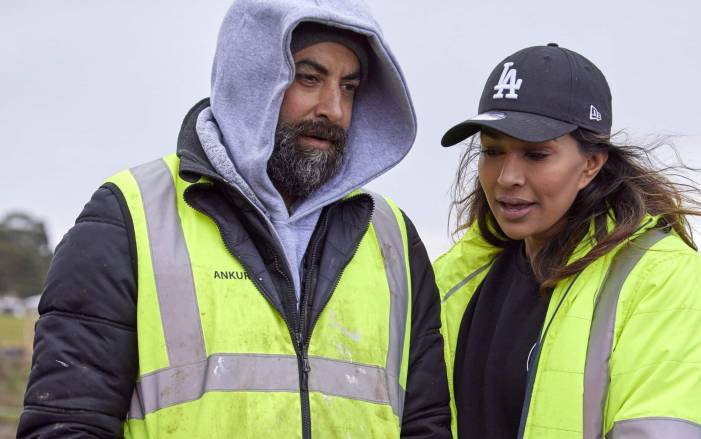 The Block has turned into one giant mud puddle due to the punishing weather.

This week, Omar and Oz have been having a lot of shutdowns and arguments with Foreman Dan.

Hell week is huge and there are some massive hallways. This includes Dylan and Jenny, who have a hallway that is 40 metres long.

Rachel has the flu and is ill in bed. The Block is also being impacted by the weather, the flu, and Covid, with many trades being sick.

After Omar and Oz’s tiler was removed from The Block for failing to present the proper certificate of currency, there was major drama.

Builders and former contestants on The Block Duncan and Spence are extremely pleased with how Scotty’s hallway and powder room are progressing at his home.

Oz and Omar are struggling to find a tiler at the last minute.

Scotty and Shelley do their walk arounds, one of the findings from the financial audit was that Sarah-Jane spent Block money on personal items including cigarettes. She owns it and will pay it back.

At Ankur and Sharon’s, Scotty eludes to the fact they pair are having budget problems as they try to finish their hallway, which he and Shelley describe as “dramatic.”

Foreman Dan isn’t happy with House No. 1 and Tom, for their lack of respect around their CSR sponsor product which is left hanging in the rain.  Tom takes the call from Dan at the pub, where he is having lunch every week.

Last year’s winners Mitch and Mark arrive on The Block and meet everyone, making an entrance of course.

Freedom Kitchens can’t do some of the cabinetry at Omar and Oz’s house and Bryce from the organisation is devastated. It’s just impossible to deliver in the time frame.

The next episode of The Block airs Monday 3 October at 7.30pm on Channel 9.