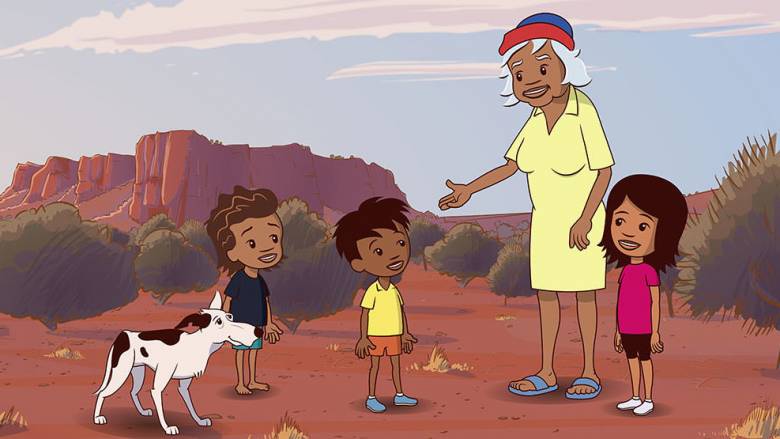 The Logie award-winning children’s series heads back to school with your favourite cousins.

The season commemorates Ningali Lawford-Wolf’s significant contribution to Little J and Big Cuz and the wonderfully generous life she lived. Her family has stated:

“Her career was a big part of who she was, and she would have wanted to continue to share her work.”

In season three, Big Cuz (Deborah Mailman) starts to navigate some tricky adult responsibilities like captaining the rugby team, getting her ‘pen licence’ and proving she can take on the challenge of looking after her own dog. Little J (Miranda Tapsell) and best friend Levi (also played by Ursula Yovich) get up to more adventures on Country together, gaining invaluable knowledge about their culture and learning about the importance of having each other’s backs in tricky situations. Friendly faces Nanna, Old Dog (Aaron Fa’Aoso) Uncle Mick (Mark Coles Smith) and Ms Chen (Renee Lim) also help guide Little J and Big Cuz along the way, as they find out more about their world and themselves, whether it’s in the backyard, on Country or in the classroom.

The new season will premiere on NITV on December 17 at 7:30pm AEDT, with catch up available on SBS On Demand. The show will air on ABC Kids in 2022 and be available on the ABC Kids app as well as iview. The ground-breaking show was financed with the support of the ABC, Screen Australia, Film Victoria, the Tasmanian Government through Screen Tasmania, the Australian Council for Educational Research and the Australian Children’s Television Foundation.

The first series of Little J and Big Cuz was supported through development by Screen Australia’s Indigenous Department and the Australian Council for Educational Research, and was based on an Indigenous perspective on the Early Years Learning Framework, to build engaging resources to help Indigenous kids transition into school, all while demystifying Indigenous culture for non-Indigenous children.

The third season of Little J and Big Cuz will also be translated into several Indigenous languages including Ngukurr Kriol, Kunwinjku and palawa kani, reaching ever wider audiences, deepening connections and galvanising communities around great stories in their own languages.

The season three premiere of Little J and Big Cuz will lead NITV’s refreshed family night slot, which airs every Friday at 7.30pm.