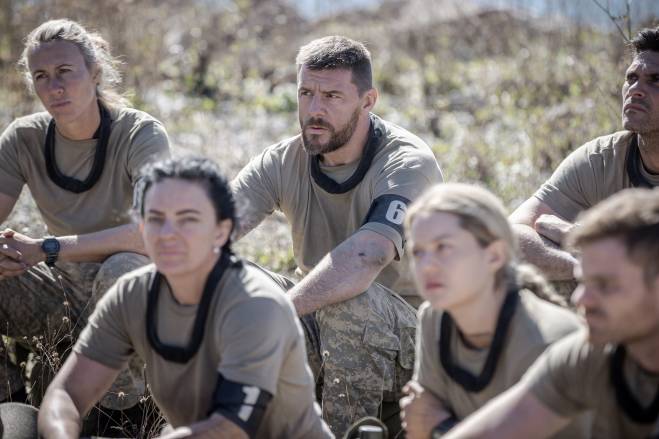 Last night on SAS Australia, 16 star recruits faced a harrowing ‘Death by Drowning’ task, all in the name of control as Manu and former politician Emma Husar take the option to leave.

Strapped into a car and submerged under water, they had to hold steady for 40 seconds before making their escape and swimming to shore.

Overcome by fear, celebrity chef Manu Feildel handed in his number before attempting the task, becoming the third recruit to leave the course.

“I don’t like the word regret as such, but yeah, in a sense I wish I could have got my head in the game mentally.

“But do I need to prove anything to myself to move forward in life? The answer is no. I’ve got a good life and I want it back.”

A panic-stricken Bonnie Anderson was also on the verge of quitting, but managed to complete the terrifying exercise, while the task brought up traumatic memories for athlete Jessica Peris who was later brought in for questioning by the DS.

Peris revealed it had been tough growing up in her mother’s shadow and that her mental health suffered after testing positive to a banned substance, forcing her withdrawl from the 2018 Commonwealth Games trials.

Peris, who continues to fight for justice today, offered the devastating admission she’d attempted to take her own life in the past.

“That was absolutely heartbreaking.

“I felt as if I had no way out, I didn’t want to be here anymore. It’s definitely one of my biggest regrets in life, because what if I didn’t wake up. My son wouldn’t have a mother, my mother wouldn’t have a daughter, but that’s what it pushed me to.”

As the recruits started out on a combat fitness test, Emma Husar became the fourth person to VW, when the pain from a calf injury became too much to bear.

The gruelling series of exercises were actually a test of integrity, with hidden cameras watching the recruits’ every move.

Bra Boy Koby Abberton was caught out cutting corners, doing 15 press ups instead of the instructed 30. After failing to own up, he was hauled over the coals by the DS.

A defiant Abberton addressed his fellow recruits, who were now all on high alert awaiting a beasting:

“I feel pretty bad about this whole situation. I counted wrong.”

The 14 recruits still on course in the hope of passing SAS selection are:

Monday 7.30pm, recruits are plunged into a frighteningly real casualty rescue mission and a vicious hand to hand combat test sends shockwaves among the group, with one recruit sent to emergency.

Check out 7plus where you can find uncensored episodes, deleted scenes, extended interrogations and exit calls.

SAS Australia airs Monday to Wednesday 7.30pm on Channel 7 and 7plus.