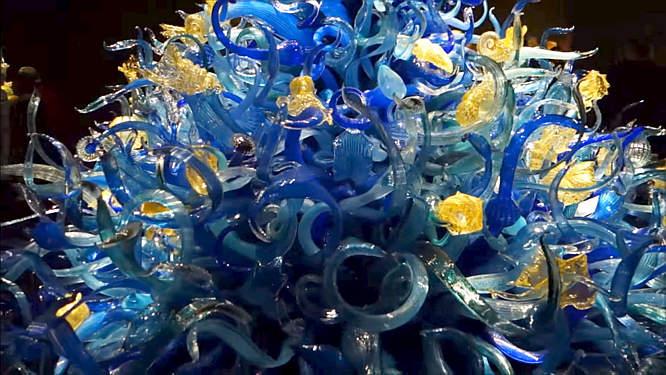 Artist Dale Chihuly is widely known as the enigmatic figure behind impressive glass sculptures that are both well-integrated yet strikingly imposing as they float through Finland’s rivers, crowd the narrow canals of Venice, blossom across the ceiling of the Bellagio in Las Vegas, Nevada, and grace the galleries of major museums across the country and across the world. However, these achievements cannot capture the full impact of the profound heart and mind of the man behind the glass. Both complex and compassionate, Chihuly is a beloved father, a supportive friend, a dedicated partner, and a man who has transcended his bipolar diagnosis and great personal tragedy.

Master of Glass: The Art of Dale Chihuly takes a deeper dive into the people, places, and things that Chihuly has collected in his life; revealing a man whose keen eye for beauty and connection will leave behind an enduring legacy.

“Master of Glass: The Art of Dale Chihuly will explore the work of one of the world’s most impactful artists, and allow viewers to have unprecedented access into his world. We are thrilled to add this special to our portfolio of arts and culture content,” said Monica Barrios, Executive Producer, Smithsonian Channel.

Aerial Argentina consists entirely of aerial scenes offering sights and flyovers of historical landmarks, national parks, and well-known buildings and homes in urban areas. This narrated series captures the history and spectacle of nature across three episodes: 1. The Pampas, 2. Patagonia and 3. Contrasts. In the Christmas special, Inside The Christmas Factory, Gregg Wallace, Cherry Healey, and Ruth Goodman explore the fascinating factory processes and surprising history behind our favourite festive treats.

Paramount Media Networks & MTV Entertainment Studios is one of the preeminent media entities in the world that connects with global audiences through its nine iconic brands – MTV, Comedy Central, VH1, CMT, Pop, Logo, Smithsonian Channel, Paramount Network and TV Land – and its Studios arm which produces acclaimed series and movies as well as award-winning documentaries through MTV Documentary Films. The most captivating stories and experiences are on Paramount+. Try it free!