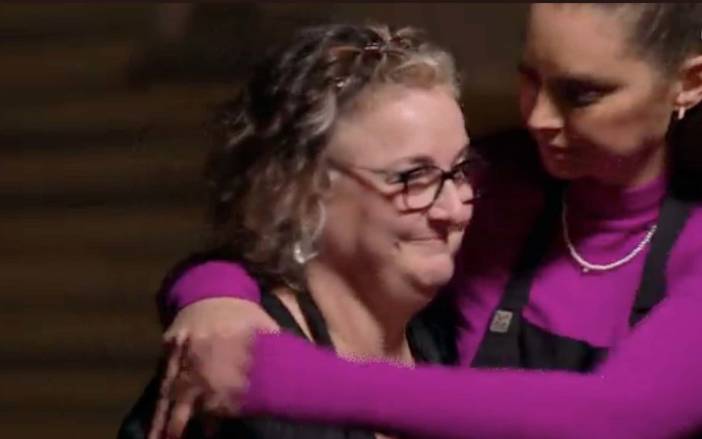 Julie Goodwin won the first season of MasterChef Australia over ten years ago, winning the nation’s hearts. However, on Tuesday night’s episode, our favourite home cook was eliminated from the MasterChef kitchen for the very first time.

The top five arrived at the banks of the River Derwent on the last day of their road trip through Tasmania. The award-winning whisky and gin produced by Lawrenny Distillery is made with some of the world’s purest water sources, according to Melissa.

The contestants would each be required to highlight either whisky or gin during a four-course service challenge, the judges revealed. Sarah received a vegetarian course assignment.

With three hours to prepare each course for 20 diners plus the judges, Daniel received the seafood course, Billie the meat course, and Julie the dessert.

Andy liked the pickled mushrooms and blackberries, but the judges weren’t sure about the addition of the togarashi which competed with the whiskey flavours.

Daniel was suddenly hit by the realisation that he forgot to turn the temperature of his fish down in the oven, and as soon as he looked inside he could see the fish was overcooked. He raced to the pantry and grabbed squid, working quickly to clean and fry them in gin.

Jock said while the salmon would have been nice, the dish was better with the calamari, the cook on the squid was perfect and the orange zest and juniper in the crumb was wonderful.

Billie was concerned about the cook on her lamb, but when it rested she could see it was beautifully medium rare. She added the crispy barley, plated up the puree and mushroom duxelles before her plates were sent out.

Andy said the lamb was spectacular. The judges agreed that the orange and carrot puree was wonderful, and the whiskey in the duxelles was dynamite, but the texture of the barley was a little tight.

Julie could see her cakes were a little dark and she was worried they may be burnt on the bottom. She decided to take out the parts she thought were cooked perfectly, dicing up slices before plating them with the butterscotch sauce, pecan pepper crumble and whisky chilli ice cream.

Melissa said it smelt amazing, but the cake was unfortunately burnt, and Jock said what was most disappointing was that Julie had nailed the brief, and it was a real shame to see the cake hadn’t landed.

The judges announced that there was no escaping the burnt element in Julie’s dessert and the season 1 winner just missed out on a place in the MasterChef Australia: Fans & Favourites top four.

Julie said she had the most incredible time and admitted while it was a huge decision to come back, she had no regrets.