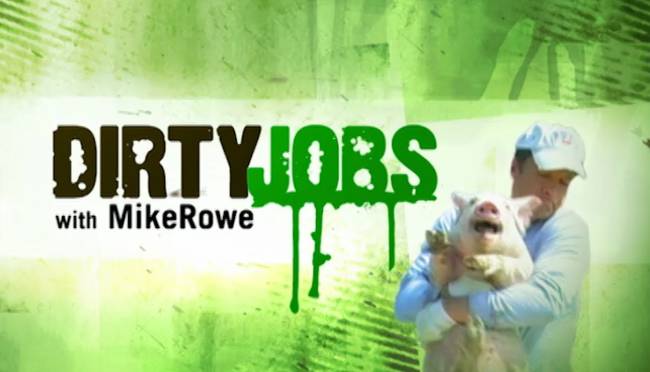 Mike Rowe gets back to work for an all-new season of “Dirty Jobs” on Sunday, December 11 @ 8 PM ET/PT, revealing the hardworking Americans who have found their way to some of the most extraordinary jobs that make civilized life for the rest of us possible. Every episode of this fan-favorite series celebrates the unsung heroes and the communities that rely on these essential jobs across industries, ranging from construction to sanitation, manufacturing, and more. And for Mike, the dirtier the job the better this season, as he tackles each with gusto and a no-nonsense approach which Discovery audiences respect and admire.

In the December 11 premiere of “Dirty Jobs,” Mike travels to West Palm Beach, Fl to take on the job of Pool Liner Fixer with second-generation pool fixers Dan Duecker, Dave Duecker, and Juan Pablo, who lead Mike into the dirtiest pool in America to clean 17 years of accumulated filth. Later, in Orlando, Mike takes on the job of Hotel Soap Recycler and meets with Shawn Seipler and “Soap Whisperer” Carlos Anderson to recycle dirty hotel soap to donate to people in need.

Additional ‘dirty’ jobs Mike takes on this season, among others, include:

· Beaver Relocator – Mike travels to Utah and helps save municipal infrastructures while positively impacting the local ecosystems as he traps, treats, and relocates urban nuisance beavers

· Deer Urine Farmer – In Illinois, Mike collects and bottles the freshest farm-raised deer urine on the market sold to hunters, he discovers feces from a new species of deer

· Pile Jacketer – Mike travels to Pensacola, FL to work waist-deep in a river to reinforce the crumbling infrastructure of a dilapidated bridge

· Spice Maker – Mike returns to his hometown Baltimore to rectify an OLD mistake and learns the recipe for Maryland’s most popular crab seasoning.

“Dirty Jobs” is co-produced for Discovery Channel by School of Humans, LTD. and MRW Productions.