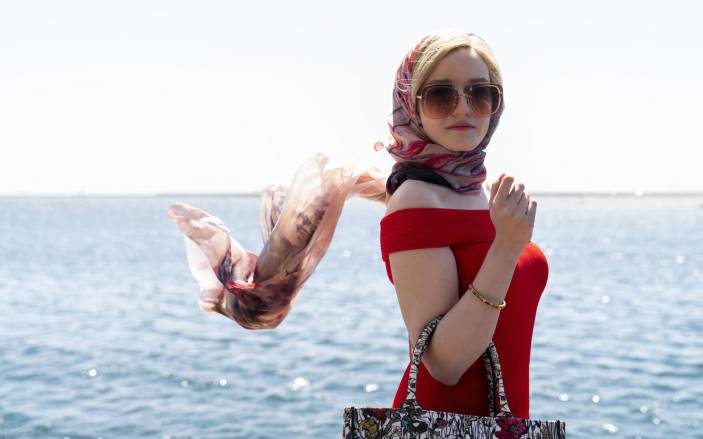 The Apprentice: ONE Championship Edition

Candidates from around the world vie for a $250,000 job offer with the ONE Championship sports media empire. To win, they’ll need brains and brawn.

Nicole continues to raise a son who has much to learn about his superpowers. But with Dion growing stronger, danger may be closer than they think.

As Alma tries to rebuild her life, a reunion with Darío rekindles their doomed affair and brings his more sinister side to the surface.

Meet Senior Detective Terry Seattle (Will Arnett), Homicide Division. For Terry, every day means a new murder case and a new celebrity guest star as his partner. But here’s the catch: each episode’s guest star isn’t being given the script. They have no idea what’s about to happen to them. Together, the guest star and Terry Seattle will have to improvise their way through the case… but it will be up to each celebrity guest alone to name the killer. Join them as they punch a one-way ticket to Murderville. The six-episode procedural crime comedy premieres globally on Netflix on February 3. Based off the BAFTA award winning BBC3 series Murder in Successville by Tiger Aspect Productions and Shiny Button Productions. Celebrity Guest Stars include Annie Murphy, Conan O’Brien, Ken Jeong, Kumail Nanjiani, Marshawn Lynch and Sharon Stone.

After a life-altering event, Ola embarks on a journey of self-discovery while dealing with the challenges of raising two children and making ends meet.

Together, the Magnolias work through new relationships, old wounds and town politics as the sweet parts of life blend with the salty and the sour.

In this reality dating series, marriage-minded singles in Japan meet, date and get engaged — before ever setting eyes on each other.

Brazilian entrepreneurs pitch their ideas to an audience and celebrity judges. But to win R$200,000, they’ll also have to navigate tough challenges.

The misadventures of hard-hitting, hard-drinking Queen Bean, her feisty elf companion Elfo and her personal demon Luci return and deepen in Part IV of Matt Groening’s comedy fantasy series Disenchantment. The mystery of Dreamland’s origins – and the stakes for its future – become ever clearer as our trio – and King Zøg – find themselves on personal journeys that will ultimately tie in to the kingdom’s fate. Separated at the end of Part III, our heroes race to reunite in this sweeping series of ten episodes. They’ll find themselves everywhere from the depths of Hell to the clouds of Heaven and everywhere in between, including Ogreland, Steamland, underwater, monasteries, insane asylums, the Enchanted Forest, the Dreamscape and more. All the while, puzzle pieces both canonical and personal will reveal themselves to eager fans.

Until Life Do Us Part

Three generations of a family living together in an idyllic villa juggle the demands of their wedding planning business and their own personal crises.

Audacious entrepreneur or con artist? A reporter digs into how Anna Delvey convinced New York’s elite she was a German heiress. Based on a true story.

As Hugo investigates the bombing, he and his friends deal with a new pair of adversaries and a fresh set of challenges at work.

A new journey begins for singles seeking transformative love — sight unseen. Who will find romance and who will come face to face with heartbreak?

Inside a national weather service, love proves just as difficult to predict as rain or shine for a diligent forecaster and her free-spirited co-worker.

In a time when dreams seem out of reach, a teen fencer pursues big ambitions and meets a hardworking young man who seeks to rebuild his life.

Devotion, a Story of Love and Desire

A seemingly happy marriage begins to dissolve when the husband’s faithfulness is called into question, and both spouses become tempted by other people.

In a luxury apartment tower, six different women in unhappy marriages end up crossing the line into infidelity. Based on the manga series by Kurosawa R.

Leaning on each other through thick and thin, a trio of best friends stand together as they experience life, love and loss on the brink of turning 40.

One person’s junk is another person’s profit. Seasoned collectors venture out across Tennessee in search of bargains they can sell for big money.

Kurt investigates a mysterious, grisly death that seems connected to an incendiary national news story that was one of Rask’s first cases in Malmö.

Under a new administration, General Naird and his dysfunctional but endearing crew have four months to prove that Space Force is worth keeping around.

Classic cartoon craziness meets an interactive quiz in a new series from the creators of “Black Mirror.”

Thirty-year-old Anita travels back to age 15 and starts meddling with everybody’s lives — until she realises the only life that needs fixing is her own.

Pol is challenged by intimidating professors and a group of new friends when he enrolls in university in pursuit of a philosophy degree.

In this sequel to “Vikings,” 100 years have passed and a new generation of legendary heroes arises to forge its own destiny — and make history.

A blind date leads to misunderstandings and mishaps in this workplace rom-com.

Love, Life & Everything in Between

An ode to Valentine’s Day in various Arab cities, this anthology series tinged with dark humour explores love at large — and relationships up close.

A tough judge balances her aversion to minor offenders with firm beliefs on justice and punishment as she tackles complex cases inside a juvenile court.

Based on the real-life friendship between Anne Frank and Hannah Goslar, from Nazi-occupied Amsterdam to their harrowing reunion in a concentration camp.

Raquel’s longtime crush on her next-door neighbour turns into something more when he starts developing feelings for her, despite his family’s objections.

When her boyfriend loses a mobster’s cash, Savi races against the clock to save the day — if only she can break out of a curious cycle of dead ends.

A wealthy teen and his friends attending an elite private school uncover a dark conspiracy while looking into a series of strange supernatural events.

While vacationing at a seaside resort, a hopeful medical student experiences first love with a local kitesurfer, but their friends and family disapprove.

An ad executive and a fashion designer-blogger don’t believe in love, so they place a bet to make the other fall head over heels — with unusual tactics.

Love never hurt so good for two co-workers who enter a contractual relationship as partners in consensual play, pleasure and pain.

Under pressure to finish her novel and move to Montreal for her relationship, a queer 20-something in Amsterdam searches for what she wants in life.

Landing the lead in the school musical is a dream come true for Jodi, until the pressure sends her confidence — and her relationship — into a tailspin.

Android chefs. Drone security. Robot overlords. The future looks bright until the cracks show and the AI uprising begins in this sci-fi comedy.

During a sleepover, Auntie Opal and her niece Nina accidentally release the mythical and dangerous Erax creatures that must be returned to the storybook from which they escaped.

High school seniors Nikki and Samantha are in love and planning their future — until Nikki’s violent past comes back to threaten everything she holds dear.

Forgive Us Our Trespasses

In 1939 Germany, a disabled farm boy is pursued by Nazi soldiers after Hitler enacts Aktion T4; a program to euthanise people with disabilities.

A revenge mission becomes a fight to save the world from an ancient threat when superpowered assassin Kai tracks a killer to Bangkok.

An unlikely team of Rabbids are on the mission of a lifetime to Mars. It’s up to them to come together and stop the galaxy’s newest threat.

After nearly 50 years of hiding, Leatherface returns to terrorise a group of idealistic young friends who accidentally disrupt his carefully shielded world in a remote Texas town.

After Mirta dies of a drug overdose with her lover, she resuscitates alone and discovers she’s part of a violent world she never knew existed.

When aspiring musician and student Deniz falls for a rough-hewn motorbike racer, tragedy and family opposition obstruct their path to love.

Madea’s back — hallelujer! And she’s not putting up with any nonsense as family drama erupts at her great-grandson’s college graduation celebration.

After going to extremes to cover up an accident, a corrupt cop’s life spirals out of control when he starts receiving threats from a mysterious witness.

A blackmail note threatening to reveal a woman’s affair sparks a chain of events that serves as large-scale group therapy for her entire family.

Y’all wanna hear something crazy? Then tune into Comedian Ms. Pat’s first hour-long Netflix special, directed by the legendary Robert Townsend. Ms. Pat recalls growing up poor in Atlanta during the Reagan era, what she learned spending five days in juvenile detention, how her mom made her get baptised at local churches to get money, and much much more. Ms Pat: Y’All Wanna Hear Something Crazy? is produced by award winning producers Page Hurwitz and Wanda Sykes for Push It Productions and Reg Tigerman. It launches globally on Netflix on February 8, 2022.

Six of South Africa’s top comedians take centre stage and showcase their talent in this collection of short stand-up sets.

Mo Gilligan breaks down his days as a broke teenager, working in retail, relationship dynamics, annoying talk show producers and more in this special.

Posing as a wealthy, jet-setting diamond mogul, he wooed women online then conned them out of millions of dollars. Now some victims plan for payback.

Steven’s travels take him to New Mexico for big game and an exotic import, as well as Hawaii, where he hunts feral goats and takes up spearfishing.

The detectives who captured the BTK Killer and other notoriously brutal murderers recount the brave actions and burdens behind their investigations.

The lives of an emerging superstar and a filmmaker intertwine in this intense, intimate three-part documentary charting rapper Kanye West’s career.

Downfall: The Case Against Boeing

Investigators reveal how Boeing’s alleged priority of profit over safety could have contributed to two catastrophic crashes within months of each other.

Kid’s superhero dreams come true as the Local Heroes become Earth’s greatest champions. But is something amiss with this ridiculously awesome adventure?

A remote Argentine resort revives its wakeboarding competition, drawing in Mexican athlete Steffi, who is determined to uncover a family secret.

Follow the misadventures of the impulsive Cuphead and his easily swayed brother Mugman in this animated series based on the hit video game.

Step into Karma’s musical world as she rocks the mic — and her curls — for this fun and funky playlist packed with rhymes and the power of positivity!

A year after losing her mother, a young girl learns that she must journey across Japan to the annual gathering of gods in the sacred land of Izumo.

While struggling to adjust to life at his grandfather’s cattle station in Western Australia, a boy forms a bond with a one-of-a-kind dog.

Georgia has two goals: Nab a gorgeous boyfriend, and throw the best 15th birthday party ever. No. 1 is within reach when a new boy arrives in town.

During a temporary bout of lucidity from vascular dementia, matriarch June Wilton sets out to fix the family she believes has fallen apart without her.

Relations between Stewart and his wife crumble after she learns that he found a corpse while on a fishing trip but delayed alerting the authorities.

Three best friends negotiate work, fun, identity politics, hookups and wild nights out in this razor-sharp satire of 20-something life in Melbourne.