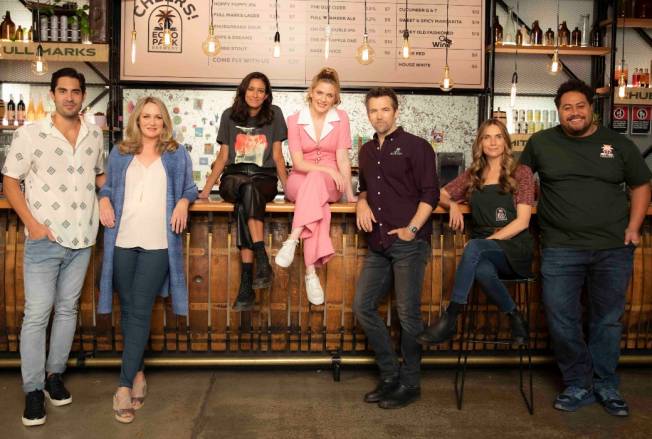 Filming for the new comedy series Colin from Accounts, for Binge, is already underway in Sydney.

Helen Thomson (Rake, Elvis), Emma Harvie (Frayed, Diary of an Uber Driver), Genevieve Hegney (Young Rock, Doctor Doctor), Michael Logo (Love Me, Why Are You Like This), and Tai Hara join creators, writers, and stars Patrick Brammall (No Activity, A Moody Christmas) and Harriet Dyer (Wakefield, The Invisible Man) (Hyde and Seek, Home and Away).

Ashley (Dyer) and Gordon (Brammall), two single(ish), complex humans, are pulled together by a car accident and an injured dog in the eight-episode comedy. They’re described as imperfect, humorous people who chose each other and are brave enough to exhibit their true selves, wounds and all, while navigating life together.

Binge Executive Director, Alison Hurbert-Burns, said: “The team has assembled a stellar mix of local talent led by Patrick and Harriet, that will bring this story, packed with humour and plenty of heart, to life. We have had so much fun shooting this new original, Colin from Accounts, across Sydney suburbs including Marrickville, Leichhardt and Redfern and can’t wait to bring it to Binge viewers later this year.”

Easy Tiger’s Rob Gibson and Ian Collie said: “With Patrick and Harriet at the heart of the show, it’s no surprise we were able to bring some of the best and funniest people in the business on board. And we’re really excited to introduce some extraordinary new faces to Binge audiences. We’re very grateful to our partners at Binge and CBS Studios, who immediately saw the appeal of Colin from Accounts for their audiences in Australia and around the world, and also of course to Screen Australia and Screen NSW for their wonderful support.”

The series is distributed outside Australia and New Zealand by ViacomCBS Global Distribution Group. The series commissioned for the Foxtel Group will be produced by Easy Tiger Productions and CBS Studios. It has major production funding from Screen Australia with support from Screen NSW.