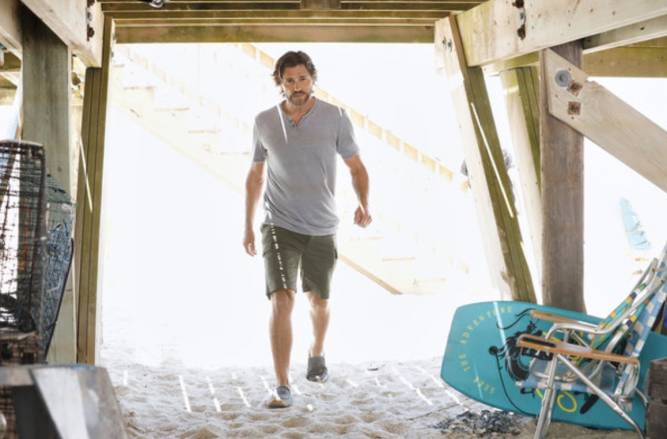 Jack (Page) was very sick and close to death, but his wife Lizzie (Schull) is the one who unexpectedly passed away. After a surprising recovery, Jack returns to her beachside hometown with 15-year-old daughter Mikki (Madeline Grace Popovich, “The Christmas High Note”) and 10- year-old son Tyler (Gavin Borders, “WandaVision”) to spend the summer in the childhood home Lizzie fondly called “The Palace,” hoping they all can heal.

While there, Jack puts his carpentry skills to use on a project to help Jenna (Drew), a recently divorced single mother who owns the local café. Life without her mother is especially difficult for Mikki, who doesn’t like living in the town. Jenna offers her a job at the café and, as Mikki spends more time with Jenna’s son Liam (Bryant Prince, “Terminator Genisys”), the two become close over their shared passion for music.

Meanwhile, Jack turns his attention to the old lighthouse, where Lizzie used to play as a child, that fell into a state of disrepair. While Jack works to restore it, he begins to see – and speak – with his late wife. Through these visions, Lizzie tells Jack she only wants the best for him and their kids and believes they can find it in her hometown.

Struggling to rebuild their lives during this unforgettable summer, Jenna may be just what Jack needs to learn to accept the past – and his place in the world – and for him and his kids to learn to become a family once again.

“One Summer” is from One Summer Pictures LLC. Bruce Johnson, Stan Spry and Eric Woods are executive producers. Anthony Fankhauser is co-executive producer. R.C Newey directed from a script by Maria Nation and Michael Reisz. Based on the New York Times
bestselling book by David Baldacci.

One Summer Premieres Sunday 3 October 2021 at 9.00pm on Hallmark Movies and Mysteries.