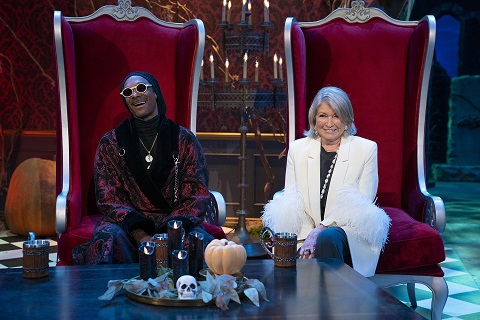 In SNOOP AND MARTHA’S VERY TASTY HALLOWEEN teams of three bakers, called “Scare Squads,” are tasked with baking and building a full-sensory 12×12 Halloween world that people can literally explore. The catch? Their worlds must be inspired by the concept of fear. Imagine larger-than-life-sized chocolate spiders or cotton candy cobwebs!

Tasty food content creator, Alvin Zhou will use his cooking and baking knowledge to judge each baker’s creation alongside Snoop Dogg and Martha Stewart.

Trios of the country’s most talented and award-winning bakers compete to build an immersive, edible spectacle that celebrates the colorful creativity of Halloween. After the clock runs out, the judges crown the team that builds the tastiest confectionary world, and the competition ends in a fantastical Halloween party.