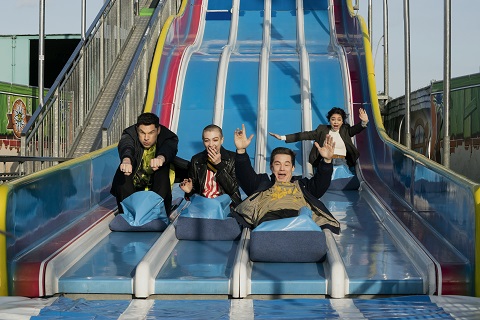 In the new series for Peacock, several years after we last saw him in “Pitch Perfect,” Adam Devine’s Bumper Allen moves to Germany to revive his music career when one of his songs becomes big in Berlin.

To think this journey began over 15 years ago – from the discovery of Mickey Rapkin’s book, to three incredible films, and now a television series. We could never have imagined the life that this story would take on. It was really important to us that Bumper in Berlin be recognizable to the fans, for its irreverent comedy and phenomenal music, but also entirely distinct from what you’ve seen before. We wanted to honor The Barden Bellas and the Pitch Perfect world, while expanding into a fresh and brilliantly weird character journey. This story is about second chances, friendship, and the idea that your dreams can come true in unexpected ways – anywhere in the world, at any point in your life. When we brought Megan Amram on board, it was clear she shared that vision and brought the whole Berliner world and characters to life in a way that only Megan could.

I have so much love for this cast – they are just the most talented and hilarious group of people. It’s been so fun watching Adam Devine grow as an actor and artist, from his first Pitch Perfect audition over ten years ago. And it’s been an absolute joy seeing Sarah Hyland, Jameela Jamil, Lera Abova and the fully-fleshed Berliner Flula Borg bringing their own brilliance and outstanding performances. We also worked with incredible musicians and artists to write songs that really speak to each character. It’s just been an amazing journey and we’re so excited for the world to see this story continue to unfold.

Dear Members of the Press (I’m sorry to lump you all together, I’d list you all by name if I could, have to imagine there’s a Matt or two in there):

Guten tag! Or, if you’re reading this at night: Guten abend! But if it’s night, please, put down your work. Be present. Have a nice dinner at a local restaurant. Tell them Megan sent you.

I am deeply excited to share with you the first season of Pitch Perfect: Bumper in Berlin. This show is a spin-off series from the Pitch Perfect movie franchise, and it has been so fun playing in the Pitch Perfect sandbox. I have been honored to have been brought into the Pitch Perfect fold by Elizabeth Banks. Like many of you, I saw the movies in the theaters a decade ago and laughed my butt off. My toes have still never recovered from how hard I tapped them.

With Bumper in Berlin, the other producers and I decided we wanted to expand the world of Pitch Perfect into something recognizable yet unique. We wanted to keep what made the movies special but create a new world that felt completely original. To take the elements of the movies we know and love — the humor, the camaraderie, and the music — and make it something sweet and absurd. Two beloved characters from the movies are joined by a whole new cast of characters who hopefully inject a freshness and absurdity to the franchise the world already adores.

Adam Devine is an absolute treasure – consistently funny and sweet. Sarah Hyland and Adam have incredible chemistry and she has the pipes of a bona fide superstar. Flula Borg is as funny as expected but brings a grounded, beating heart to the show. Jameela Jamil steals every scene she’s in and our newcomer Lera Abova is insanely talented and we’re so excited to be introducing the world to her.

Plus, we got to make this whole show in Berlin! The Windy City! City of Lights! The city they wrote “I Left My Heart in San Francisco” about! I absolutely fell in love with Berlin. It is so vibrant, inspiring, and unique, and I am thrilled this show will introduce a whole slew of Americans to a city that has not been represented heavily in American TV.

I hope this show makes you laugh, smile, sing, and ask, “why is there a real German word that translates to ‘a child who is as tall as three cheeses’”?” This show has been an absolute joy to make. Thank you so much for watching.

Produced by: Universal Television, a division of Universal Studio Group

ADAM DEVINE (Righteous Gemstones, Workahaolics) will play Bumper Allen, who, after his a cappella TikTok goes viral in Berlin, moves to Germany to pursue his dreams of becoming an international pop star. He sets his sights on the national German Unity Day concert, and vows to work as hard as he can to transition from acapella amateur into bona fide superstar. In Germany, he feels like a fish out of mustard, but he knows he can do anything he sets his mind to.

FLULA BORG (Pitch Perfect 2, The Suicide Squad, Curb Your Enthusiasm) will play Pieter Krämer who has transitioned from German a cappella star to discredited German music manager. He signs Bumper as his only client, and brings him to Berlin to pursue his dreams.

SARAH HYLAND (Modern Family, The Wedding Year) will play Heidi, Pieter, and Bumper’s cheery and slightly odd American assistant. While working on Bumper’s team by day, she secretly harbors dreams of being a singer-songwriter herself, and moonlights by performing original songs in a Berlin cabaret.

LERA ABOVA (Anna) will play Thea Krämer, Piëter’s sister and a prominent Berlin DJ and music producer. She performs in clubs all over the city as DJ Das Boot. She is as cool as Berlin in December (4.1°C).

JAMEELA JAMIL (The Good Place, She Hulk) will play a bombastic and flashy up-and-coming German pop star. Gisela is Pieter’s ex-girlfriend and Bumper’s main rival at the German Unity Day concert. She will stop at nothing to beat him to stardom.