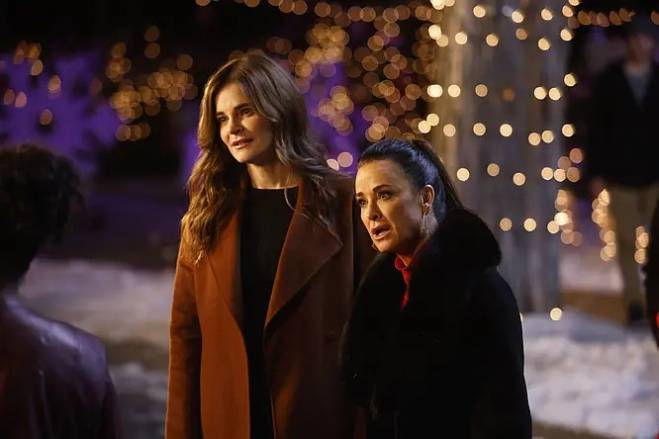 The heat is on in the Chrisley house! The one-hour special, CHRISLEY KNOWS THANKSGIVING will be available to stream Thursday, November 18.
Julie Chrisley passes on her Thanksgiving recipes by teaching her children to cook timeless dishes — all while delivering that classic Chrisley humor, and of course – a little family competition!

Hosted and executive produced by Maya Rudolph and Andy Samberg, all six-episodes will be available to stream Thursday, December 2.
“If you love Maya, Andy, Grannies, Baking, Cash Prizes and the Holidays, then this is the show for you,” says executive producer Amy Poehler. Additionally, executive producers Nicolle Yaron and Pip Wells say “’Baking It’ celebrates everything we love about the holidays; friends, family, incredible food — and grandmothers pointing out everything we do wrong in the kitchen.”

BAKING IT is a holiday competition series in which eight teams of two talented home bakers join Maya and Andy’s winter cabin for a celebration of culinary holiday traditions. Contestant duos will include spouses, siblings, best friends, and more, who will work together to create outstanding savory and sweet creations for themed challenges with the hopes of winning a cash prize. Maya and Andy will lead the festivities, also providing comedic and musical commentary on the action. The bakers’ holiday treats will be judged by tough critics – four opinionated real-life grandmothers, who happen to be fantastic bakers themselves!
Following the success of ‘Making It’, BAKING IT is produced by Universal Television Alternative Studio, a division of Universal Studio Group, in association with Paper Kite Productions and 3 Arts Entertainment. Amy Poehler, Nicolle Yaron, Pip Wells, Kate Arend and Dave Becky serve as executive producers.

THE HOUSEWIVES OF THE NORTH POLE

Starring previously announced Betsy Brandt (“Breaking Bad,” “Soulmates,” “Life in Pieces”) and Kyle Richards (“The Real Housewives of Beverly Hills,” “Halloween”), THE HOUSEWIVES OF THE NORTH POLE will be available to stream Thursday, December 9.
The Christmas Queens of North Pole, Vermont, Trish (Kyle Richards) and Diana (Betsy Brandt), have won the Best Holiday House decorating competition every year for the past nine years. But days before Christmas, a friendship-ending argument sparks a town-wide feud and draws the attention of a national magazine writer hoping to make a name for herself with her scintillating expose.

THE HOUSEWIVES OF THE NORTH POLE will be produced by Motion Picture Corporation of America (MPCA). Ron Oliver will direct, and Tippi Dobrofsky, Neal Dobrofsky, and Spyder Dobrofsky will write and executive produce. Brad Krevoy executive produces on behalf of MPCA, alongside Amanda Phillips and Eric Jarboe. Jake Relic, David Wulf, and Chris Bongirne also produce.

“Housewives of the North Pole”

Peacock will also present some of holiday season’s most iconic movies and specials such as “How the Grinch Stole Christmas!” (November 1), “Santa Claus: The Movie” (November 1), and “Mariah Carey’s All I Want For Christmas Is You” (November 14). Fans can also binge their favorite comedies during the holidays including “The Office” Superfan Episodes for season’s 1-3 and all 7 seasons of “Parks & Rec.”