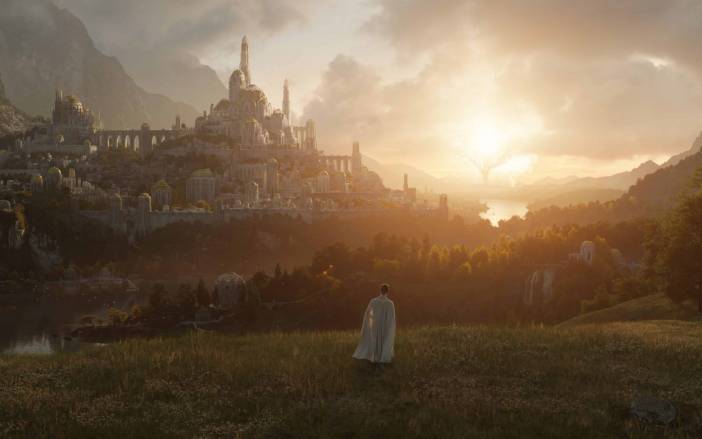 In the eagerly awaited series The Lord of the Rings: The Rings of Power, which premieres this September on Prime Video, we are introduced to the valiant legends of the fabled Second Age of Middle-earth’s history. This epic drama will transport viewers to a time when great powers were forged, kingdoms rose to glory and fell to ruin, unlikely heroes (both familiar and new) were tested, and the greatest villain ever to emerge from J.R.R. Tolkien’s pen threatened to engulf the entire world in darkness. It is set thousands of years before the events of The Hobbit and The Lord of the Rings.

The Lord of the Rings: The Rings of Power will launch with two episodes at 11am on Friday 2 September (2pm weekly there-after).

THE LORD OF THE RINGS: THE RINGS OF POWER

Prime Video’s The Lord of the Rings: The Rings of Power brings to screens for the very first time the heroic legends of the fabled Second Age of Middle-earth’s history.

This epic drama will take viewers back to an era in which great powers were forged, kingdoms rose to glory and fell to ruin, unlikely heroes were tested, hope hung by the finest of threads, and the greatest villain that ever flowed from J.R.R Tolkien’s pen threatened to cover all the world in darkness.

Beginning in a time of relative peace, the series follows an ensemble cast of characters, both familiar and new, as they confront the long-feared re-emergence of evil to Middle-earth. From the darkest depths of the Misty Mountains, to the majestic forests of the elf-capital of Lindon, to the breathtaking island kingdom of Númenor, to the furthest reaches of the map, these kingdoms and characters will carve out legacies that live on long after they are gone.

Luxe Listings Sydney is a reality series that takes viewers inside the exciting and exclusive world of elite Sydney Real Estate, told through the eyes of four leading agents as they negotiate multi-million-dollar deals in one of the most competitive and cut throat real estate markets in the world – Sydney, Australia.

Money never sleeps for these four high-powered agents, who will stop at nothing to deliver the best results for their clients. In the third season, we continue our journey with D’Leanne Lewis, Gavin Rubinstein, Monika Tu and Simon Cohen.

This season, the property market in Sydney gets even tighter with highly competitive auctions leaving the agents dueling for the most coveted properties. Gavin and Simon will be vying for the chance to find Delta Goodrem the perfect property as more celebrity clients start to call on our agents wanting luxurious retreats and mega-million-dollar waterfront property.

Jungle follows the connected lives of several strangers, each facing their own struggle, viewed through the prism of UK rap and drill music, and giving a perspective on an often unseen world. Frequently misunderstood, it’s a world where one law governs everything: only the strongest will survive. As the strangers’ worlds begin to unravel around them, they come to the realisation that every action, no matter how small, has a consequence.

The series is told through a unique blend of music and dialogue, working alongside creatively ambitious cinematography and design to create a tilted, timeless version of today’s London and brings to life a compelling and complex narrative. The series features some of the UK’s top drill and UK rap artists and looks to capture a very different side to an often told story. Portraying the city through compelling visuals, whilst detailing the many perils and dangers involved in day to day life in Inner City London and ultimately conveying a bigger message about the true value of life.

When Lou Simms starts her internship at Fountain Pictures she seems like a naïve Hollywood newcomer, awestruck by the studio’s notorious CEO, Joyce Holt. Lou soon proves herself indispensable to Joyce, who’s not only trying to out-maneuver her predatory dinosaur of a boss, but to have a baby after years of trying.

In truth, Lou has done extensive research on Joyce and landing this internship was no happy accident. As Lou’s obsession grows, she will do anything to get close to her idol, even kill.

The year is 1988. High school sophomores Abby and Gretchen have been best friends since fourth grade. But after an evening of skinny-dipping goes disastrously wrong, Gretchen begins to act…different. She’s moody. She’s irritable. And bizarre incidents keep happening whenever she’s nearby.

Abby’s investigation leads her to some startling discoveries—and by the time their story reaches its terrifying conclusion, the fate of Abby and Gretchen will be determined by a single question: Is their friendship powerful enough to beat the devil?

When twin brothers arrive home to find their mother’s demeanor altered and face covered in surgical bandages, they begin to suspect the woman beneath the gauze might not be their mother.