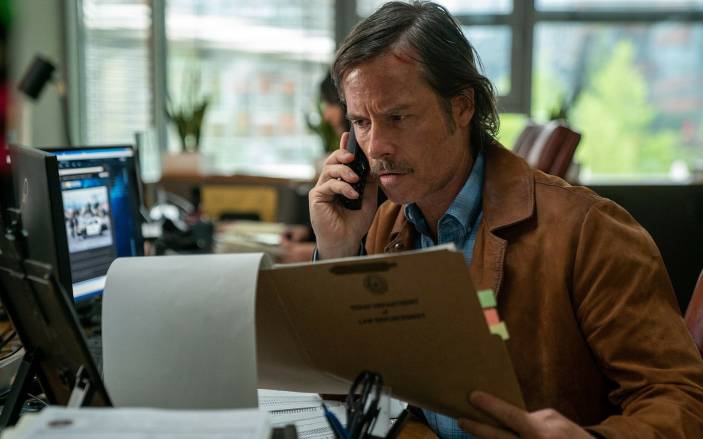 The Lord of the Rings: The Rings of Power, Prime Video’s most popular series, will have its finale Friday, October 14.

Chloe Grace Moretz stars in The Peripheral, a film from the makers of Westworld, as a woman who unearths both a hidden link to an alternate reality and a grim future for herself.

Catherine Called Birdy, written and directed by Lena Dunham, follows a 14-year-old girl in mediaeval England as she navigates through life while avoiding all the potential suitors her father throws at her. The film also stars Billie Piper and Joe Alwynn.

In the movie Memory, which also stars Guy Pearce and Monica Bellucci, Liam Neeson plays an assassin-for-hire who discovers that he has become the target.

High School is based on the best-selling memoir by musicians Tegan and Sara Quin and is a story about discovering your own identity that is complicated by the fact that your twin struggles closely resemble your own.

A woman wakes every night at 3.33am to terrifying visions in what is called the Witching Hour. In the gripping series The Devil’s Hour, Peter Capaldi and Jennifer Raine take part in a massive manhunt.

COMING TO PRIME VIDEO THIS OCTOBER

Alex Lewis (Liam Neeson) is a hired assassin at a turning point. Living in El Paso, Texas, and coming to grips with a faltering memory just as he plans to retire, Alex is ready to conclude a long career of violence and secrecy when an old contact gives him a final assignment.

However, the job isn’t what Alex bargained for, and leads him into an FBI sting operation led by agent Vincent Serra (Guy Pearce). When Alex finds a trail of abuse leading from a child prostitution ring south of the border to a wealth influential El Paso real estate magnate (Monica Bellucci) and her son (Josh Taylor), Alex secretly guides Serra’s FBI team in the right direction.

Though his inability to remember details is putting him in ever greater danger, Alex uses the skills he’s honed from a lifetime in the shadows to force ugliness into the light—but he has to do it before powerful forces destroy Alex and erase Serra’s mission to get at the truth.

In Memory, acclaimed director Martin Campbell (Casino Royale, Golden Eye, The Mask of Zorro) teams for the first time with star Liam Neeson to craft an intense action-drama about retribution, fury, and redemption.

One night she dons a headset and finds herself in futuristic London—a sleek and mysterious world, alluringly different from her own hardscrabble existence.  But this isn’t like any game she’s ever played before:  Flynne begins to realize it isn’t virtual reality… it’s real.

Someone in London, seventy years in the future, has found a way to open a door to Flynne’s world.  And as utterly beguiling as London is… it’s also dangerous.  As Flynne searches to discover who has connected their worlds, and for what purpose, her presence here sets dangerous forces into motion…forces intent on destroying Flynne and her family in her own world.

The Peripheral is master storyteller William Gibson’s dazzling, hallucinatory glimpse into the fate of mankind — and what lies beyond. From the creators of Westworld.

The year? 1290. In the Medieval English village of Stonebridge, Lady Catherine (known as Birdy) is the youngest child of Lord Rollo and the Lady Aislinn.

Her playground is Stonebridge Manor, a house that, like the family, has seen better days. Financially destitute and utterly greedy, Rollo sees his daughter as his path out of financial ruin by marrying her off to a wealthy man for money and land.

But Birdy, like all the great teen heroines, is spirited, clever and adventurous –and ready to put off any suitor that comes in increasingly ingenious ways. Her imagination, defiance and deep belief in her own right to independence put her on a collision course with her parents.

When the most vile suitor of all arrives, they are presented with the ultimate test of love for their daughter.

The series follows the story of Lucy, played by Jessica Raine, who is woken every night by terrifying visions at exactly 3.33am: the devil’s hour.

Her eight-year-old son is withdrawn and emotionless. Her mother speaks to empty chairs. Her house is haunted by the echoes of a life that isn’t her own. When Lucy’s name is inexplicably connected to a string of brutal murders in the area, the answers that have evaded her all these years will finally come into focus.

Peter Capaldi plays a reclusive nomad, driven by a murderous obsession. He becomes the prime target of a police manhunt led by compassionate detective Ravi Dhillon, played by Nikesh Patel.

Based on musicians Tegan and Sara Quin’s best-selling memoir, High School is a story about finding your own identity—a journey made even more complicated when you have a twin whose own struggle and self-discovery so closely mimics your own.

Told through a backdrop of ‘90s grunge and rave culture, the series weaves between parallel and discordant memories of sisters growing up down the hall from one another.